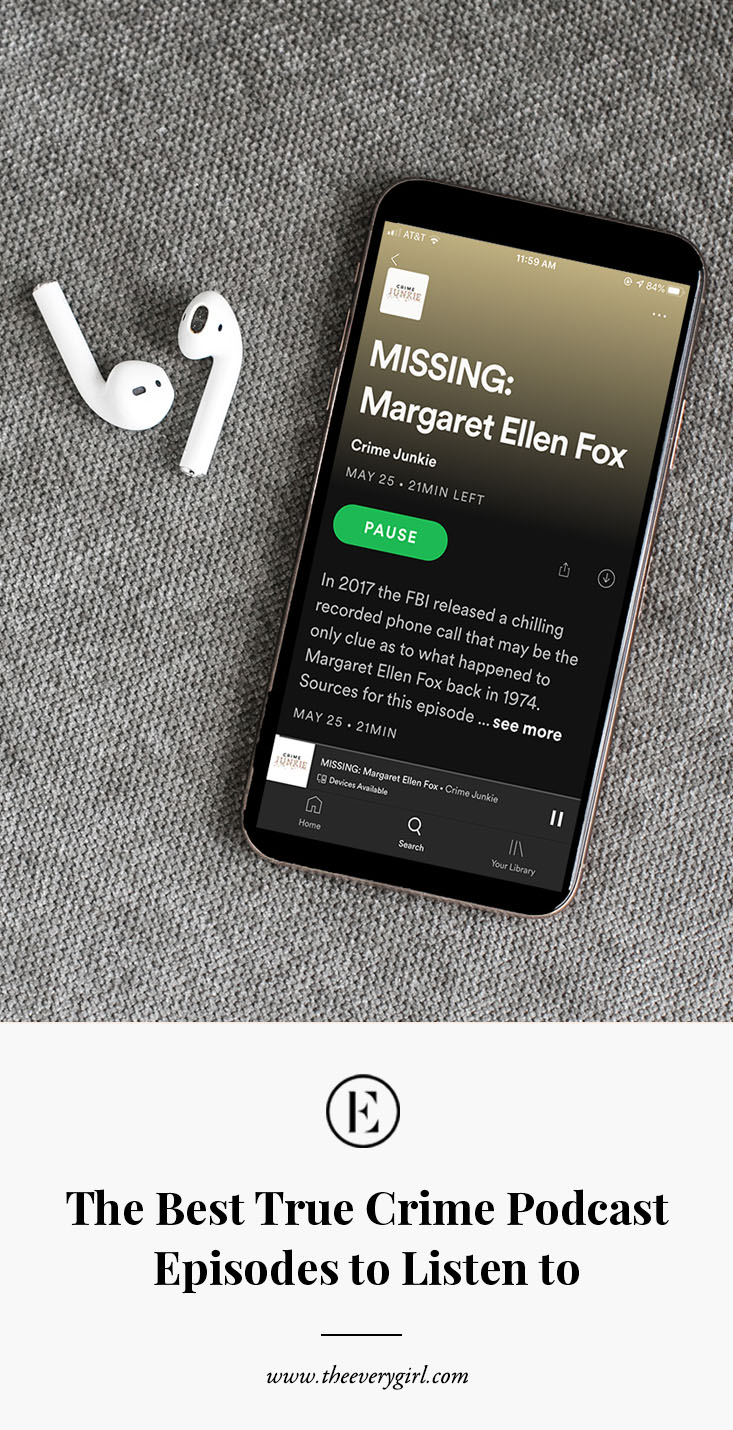 There are few things in life I’d say I was ahead of the game for. I didn’t like avocados until well into college, I bought gaucho pants in fifth grade when everyone else had them in fourth, and I had my first (and only) Taco Bell order just two months ago. But one thing that I was really, truly in love with before it was popular—besides Justin Bieber—I swear I watched his With You cover the day after it was posted on Youtube—is true crime.

Before I was even old enough to go to school full-time, I have memories of sitting awake under the covers, flashlight in hand, sneaking reads of Scary Stories to Tell in the Dark well past my bedtime. I have always lived and breathed for anything scary or thrilling, and to my absolute luck, the obsession has caught on; these days, there’s are unlimited resources to absorb crime stories, and podcasts are no exception.

True-crime podcasts are, in my opinion, arguably the best way to consume crime stories. If you pick the right ones, you can get a front-row seat to brand-new information on certain cases, but at the very least, they’ll give you 30 minutes of mind-gripping entertainment—and these days, that’s hard to come by.

If you’re looking for a place to get your feet wet, these podcast episodes (and series) are some of the best available. Once you start one, we promise, you won’t be able to stop.

Someone Knows Something: Season 6

In Someone Knows Something, award-winning filmmaker and writer David Ridgen works alongside families of victims to investigate cold cases. Season 6 covers the story of Donald Izzett Jr., who went missing 25 years ago, when he was only 19. The last one who heard from him was his mom, who he called while on a roadtrip crying and asking for money. Informative and full of developing evidence, this series pulls you in from the start.

Up and Vanished: Season 1

Up and Vanished is an investigative true crime podcast hosted by filmmaker Payne Lindsey. Season 1 dives into the disappearance of beloved high school teacher (and former pageant queen) Tara Grinstead. Her case is the largest case file in Georgia history, and the podcast uncovers even more details and evidence that surround her bizarre disappearance.

We all know of the infamous, disgusting story of Jeffery Epstein, but if you want to know more about the details of his crimes, this podcast is a great place to start. With original interviews and reporting, host Lindsay Graham exposes his actions chronologically while documenting his crimes—both sexual and financial—and debunking some of the mystery that surrounds him. Although he’s dead, Graham discusses many of his enablers that are yet to be held accountable for what they did.

This Peabody award-winner is a testament to investigative reporting, and is one of those stories that you won’t believe actually happened. Similar to the well-known Making a Murderer case, this case is chock-full of police failures and oversights surrounding the kidnapping of 11-year-old Jacob Wetterling.

This Serial-style podcast is another testament to investigative reporting in podcasts, as, over the course of a season, it provides its listeners with every possible detail about a mind-boggling case. When 23-year-old Elizabeth Andes was found murdered in her Ohio apartment in 1978, police acted like the case was relatively cut and dry—but this podcast will explain why that wasn’t the case.

In 1974, 14-year-old Margaret Ellen Fox disappeared under mysterious circumstances, and in 2017, the FBI released a chilling phone call that is one of the only clues of what happened to her. This is a lesser-known case with details you have to hear to believe.

Unsolved murders is different from other true-crime podcasts in that it provides a modern take on old-time radio, and the hosts paint the picture of the story in an entertaining, unique way. In 1933, the Johnson family’s house burned down, killing a mother and her seven children—but after some investigation, the fire seems to be far from an accident. If you want something that’s entertaining and not too bone-chilling, this is for you.

Every episode of Criminal is well-worth the listen; unlike many true-crime podcasts that cover the same well-known details of the same well-known cases over and over, this podcast is known for shedding light on lesser-known crimes. Host Phoebe Judge has a voice that was meant for podcast story-telling, and a great place to dive into what it’s all about is with this bizarre arson case.

To this day, I think this case is one of the ones that haunts me the most. If you’re unfamiliar with the story of Maura Murray, she was a college student that vanished into thin air following some sketchy circumstances, and the details surrounding her disappearance are notoriously some of the most mysterious of any case. If you are familiar with Maura Murray, this podcast is still a great listen, and will give you an in-depth run-down of exactly what went down on that snowy day in 2004.

Listening to this podcast is more of an audiobook experience than a typical true-crime podcast one—and sometimes, that’s just what you need. With an anonymous host covering just the facts of stories, every case is worth a listen, but this episode gives a deep dive into a well-known (but no longer often discussed) case: Natalee Holloway. If a look into a familiar case is what you’re searching for, this is it.

Again, I know more than anyone that there are some cases you just can’t get enough facts about, and the one highest on that list is Jonbenet Ramsey. Sure, everyone and their mother and their mother’s mother has an opinion on what happened, and while most of the facts have been out there for a while, this is a super enjoyable listen, and a great jumping-off point for those who aren’t super familiar with her case.