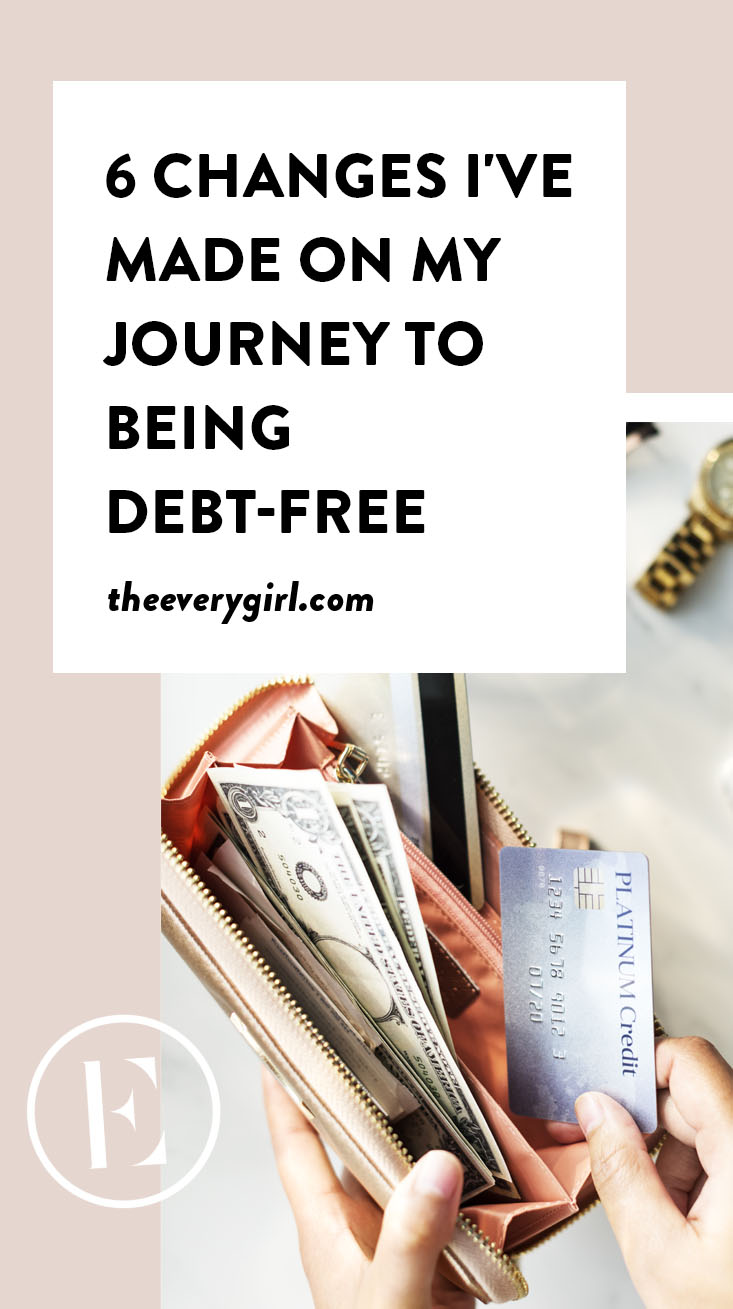 Last summer, in the midst of planning a wedding and a cross-country move, I found myself in a real financial mess. While I wasn’t delinquent on payments or behind on my rent, I had no clue how I’d cover my upcoming expenses. It became pretty clear that, despite having a great job and a degree from an impressive university, I was broke.

I’m one of the millions of Americans who graduated from college with student loan debt. And in my case, after paying on my loans for five years, I still had a six-figure balance and monthly payments equivalent to a second rent! And in conjunction with credit card bills and a car note, I was one missed paycheck away from spiraling out of control.

I had a decision to make. If I ever wanted to realize my dreams of buying a home, traveling the world, and—most importantly—building wealth for my future family, something had to change. So I pushed past my self-doubt, frustration, and embarrassment, and started attacking my debt, one dollar at a time. And today, I’m more than halfway to a $0 balance. Here are six changes I’ve made along my journey.

1. I convinced myself it was possible

Prior to embarking on this journey, I was clueless as to how bad my financial situation really was. I could pay my bills on time, enjoy local restaurants and bars, shop every so often, and still have a few dollars in my account in between paychecks. In my mind, I was doing well!

In reality, I was barely staying afloat. And it took a few wake up calls—like barely having enough for my bills after an unexpected doctor’s visit and realizing I couldn’t scrape together the deposit for my dream wedding photographer—to get my head out of the clouds. Aside from $200 in a “savings” account that I dipped into every time my checking account went into overdraft, I had nothing to fall back on. And when I finally worked up the nerve to open all my statements and tally up my balances, I could barely breathe.

How am I ever going to pay this off?

After a minor meltdown and a self-loathing session, I had a decision to make. While I had no idea how I would get it done, I knew I’d never be debt-free if I accepted defeat before I gave it a solid effort. I spent time envisioning, in great detail, what my life could look like if I was debt-free, free from monthly payments, and no longer living paycheck to paycheck. It may sound silly, but focusing on the life I can live once I’m financially stable became my biggest motivation. And with Future Me in mind, it became a lot easier to take tangible steps to close the distance between my current situation and the life I want.

2. I said “no more” adding to my balances

The most overwhelming aspect of my debt payoff journey was coming to grips with the daunting amount I owed. If I was somehow able to put every penny of my annual salary toward my debt, it would still take nearly two years to pay off. The reality of my circumstances helped me draw a hard line in the sand: if I was going to get myself out of this mess, I had to stop digging the hole I was in. That meant waving goodbye to my credit cards.

I reluctantly dumped my credit cards out of my wallet (even the ones with the great travel perks) and started leaving the house without them. Going out with only cash and my debit card to rely on scared me and I started checking my balance obsessively, trying desperately to avoid the embarrassment of having a transaction declined.

But, as uncomfortable and unenjoyable as turning my back on credit cards was, I saw a near-instant change. Getting in the habit of checking my account so often forced me to think about each purchase before and after I made it. I’d gone from using credit as a makeshift emergency fund when I ran out of money to only buying what I could actually afford. Taking credit off the table sparked a level of discipline I didn’t know I was capable of.

3.  I reduced my fixed expenses

As I started looking into ways to save more money and speed up my debt payoff, it became clear that I needed to cut some of my expenses to free up some money. Despite some of the “easy” recommendations for savings, I really hated the idea of never ordering a cup of coffee on my journey to debt freedom. Instead, I looked for ways to keep my small pleasures by lessening my largest expenses—namely my housing.

At the first opportunity I had, I downsized my apartment and signed a lease that helped me save over $200 each month. When this money freed up, with newly minted discipline on my side, I prepared to put the money toward my debt payments (as opposed to shopping, brunch, and entertainment).

4. I drafted a realistic budget

Before I got serious about paying off my debt, I would have incorrectly said that I knew how to budget. In reality, despite the budgeting apps and resources I had on my phone, I was simply tracking my spending. It wasn’t until I decided to start putting “extra” money toward my debt each month that I realized my approach was all wrong. I needed a true budget.

I started by writing down the dates and expected amounts of my paychecks. Next, I listed every recurring bill or expense I had each month—like my rent, car payment, and student loan payment—and organized them by due date. From there, I bucketed my expenses by paycheck to ensure I’d have the money and my payments wouldn’t be late. Then I layered on the estimated costs of my essentials, like gas and groceries, and any other unavoidable costs I had coming up and split them across my paycheck buckets. With any money that was left, I set aside a portion for non-essentials, like brunches and happy hours, and set committed to using the rest to attack my debt.

While the idea of budgeting initially stirred feelings of overwhelm, embarrassment, and restriction, I’ve come to see my budget as an organizational tool. Determining where my money will go and how much I’ll spend in certain categories at the start of each month takes the stress and emotion out of my payments and purchases. And I use a budgeting app so my goals and guidelines are always accessible.

Since I’m the one in charge of drafting my budget each month, I can apply lessons learned and adapt my allocations month to month. I put a little less toward debt to fund holiday gifts, for instance, and more toward debt when I get a gift or bonus.

5. I decided on a plan of attack

Once I got organized and identified additional money I could put toward debt pay down each month, I needed to decide what to pay off first. After a bit of research, I decided between two popular debt payroll methods: the avalanche and the snowball.

If I used the snowball method, I’d make additional payments on whichever debt had the lowest balance. Once my lowest balance debt was paid off, I would add whatever I was paying on it to the payments on the next lowest debt. This strategy would help me build momentum in my payoff journey, paying off my smallest debts quickly before focusing on my largest balances.

My debt balances and interest rates really varied and, initially, I wasn’t sure which payoff method made the most sense for my situation. But when I considered how long my journey to debt freedom would be, I knew the snowball method would be my best bet. By focusing on my smallest balances first, I was able to celebrate a few “small wins” early on. When I paid off my first credit card (a $1,200 balance), for instance, I felt incredibly energized around my goal—I could do this! And after a year of following this approach, I paid off five separate accounts and am putting more money than ever toward my payments.

6. I shared my goals with my girls

Along this journey, I’ve learned just how tough it is to say “no, I can’t make it” when I actually mean “I’d love to come, but I’m broke!” But I knew that making real progress with my finances would mean scaling back on the (really enjoyable) money traps I set for myself each month. That meant fewer weekend brunches, weeknight happy hours, and aimless trips to Target. And it ultimately meant learning to say “I can’t” when my friends invited me out.

Initially, I struggled with the embarrassment of being the (seemingly) “broke” one of the group and then the guilt of blowing my friends off. But after a few months of vague excuses and declined invitations, I gradually lowered my guard and let my friends know why they were seeing me less often. And despite my initial hesitation, sharing my goals with my family and friends was one of my best decisions since starting this journey.

While a few people couldn’t make sense of my efforts, most of my friends were quick to offer their support and understanding. And in the time since, many of them have stepped up to cheer me on or ask for advice on their own debt-free journeys. Even though I’m on a different personal finance journey than some, I loved that money has become less of a taboo topic in my friend groups.