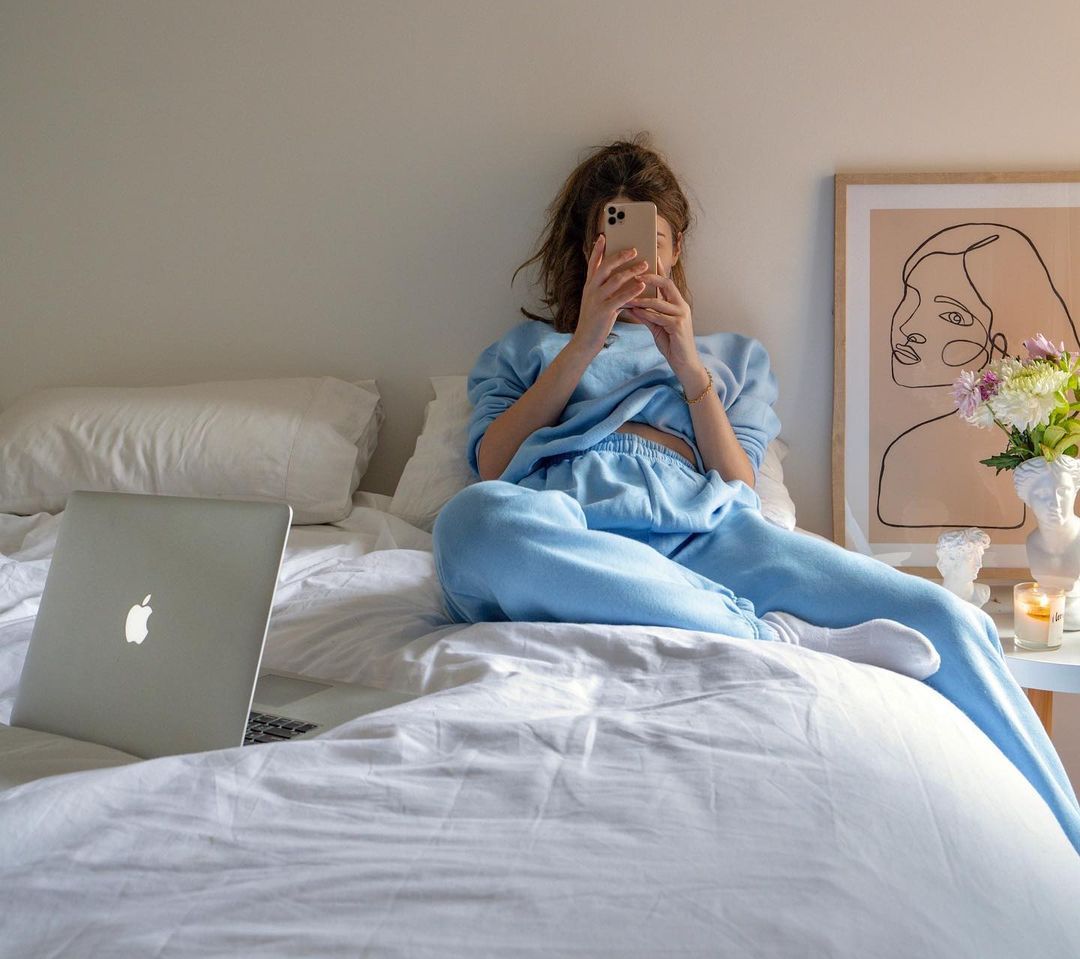 A couple of months ago on my nightly phone call with my mom, I explained that I was feeling off—not sad, not angry; overall, I just felt “meh.”

A few weeks later, I woke up to an article from The New York Times being shared by enough people that I follow on Instagram to make me click through and read it, and it felt like it was written directly for me. The piece was about something called “languishing,” which they described as “a sense of stagnation and emptiness.” It isn’t hopeless like depression, but rather feeling aimless throughout your days.

As we’re starting to see the light at the end of the COVID-19 tunnel, it felt wrong that I was feeling like this—wasn’t this what we’ve been waiting for for the past 15 months?—but it brought me solace knowing that I wasn’t alone, and that there was a word to describe the overall lack of motivation I was feeling day in and day out. And I knew I wasn’t alone in my personal life either; my coworkers and I had just had a conversation about how we felt like we were less motivated at work, and how our usual work was taking us longer, for reasons we couldn’t quite put our finger on. Alas, there was a reason, and that reason was called languishing.

Over the past year, no matter how you cut it, everyone you know has experienced something traumatic: life as we know it was pulled out from underneath us, and even now as things are looking up, there are emotions of trauma and grief that are nowhere near being healed.

According to The New York Times, “Languishing is the neglected middle child of mental health. It’s the void between depression and flourishing—the absence of well-being. You don’t have symptoms of mental illness, but you’re not the picture of mental health either. You’re not functioning at full capacity. Languishing dulls your motivation, disrupts your ability to focus, and triples the odds that you’ll cut back on work.”

The article gave me something tangible to work off of, and naming it was enough to commit myself to getting out of my languish, or at least improving upon it. These are the things I’ve done over the past month to break through languishing and get my mojo back:

Taking a walk first thing in the morning

Last summer, my favorite thing in the world was waking up at 6 a.m. to get an early-morning workout in; it was tough, but I didn’t struggle to do it once I got in the habit of it. This year, I’ve felt exactly the opposite. Despite my 6:15 a.m. alarm going off every day, I find that it feels impossible to have the motivation to get up like I used to, and I found myself snoozing and choosing a lunch-break workout instead. This lead to rolling out of bed moments before I had to be online for the day—something that doesn’t lead to creativity or productivity for me.

While I do want to get back to my early-morning routine, in the meantime, I found a compromise: no matter what, I at least get up with enough time to go for a walk before I have to start work. It can just be to Starbucks or on the lake or even around the block, but the act gets my blood pumping and tells my brain it’s time to start the day—something that rolling out of bed and plopping myself at my desk with a cup of coffee doesn’t. I’ve found that taking even 10 minutes to do this flips something on in my brain and leads me to feeling better throughout my morning, which in turn translates to a better day overall.

Focusing on tangible wins at work

One of the main symptoms of languish is feeling unmotivated, and when it comes to work, that’s not something I’m used to feeling. I generally feel truly excited to do my work, but I had found that my to-do list was piling up so much that I didn’t even know where to start. The New York Times article suggested focusing on small wins, which I decided to start.

The sweet spot to me was starting my day with a task that has in-between difficulty; it isn’t something too easy, like adding a photo to an article, but rather is something on my to-do list that is going to make me feel good and accomplished when it’s done. When I looked through my to-do list every day keeping my eye out for this kind of task, it gave me a place to start, and more importantly, something to feel good about immediately in my day.

Having goals that don’t involve work

A big part of many people’s struggle right now is that most of us are still existing from the confines of our homes—something that might not go away as office life looks toward changing permanently. My work matters immensely to me; I put all of myself into it every day, and while that gives me a huge sense of satisfaction and identity, I’ve come to realize I need goals that don’t have to do with my career.

For me, the answer to this was running. I’ve always turned to running as my exercise of choice, but for the first time, I signed up for a virtual race that came with a training plan. I’ve never done a running training plan in my adulthood, and the fact that my workouts were determined for me each day gave me something to throw myself at that didn’t involve my computer. They were that sweet spot of difficulty—challenging but not impossible—and made me feel truly like a new person at the end of every day. The workouts being something I needed to rise to even when I didn’t necessarily feel like it was what I personally needed, and it helped me to remember that life isn’t just working in my one-bedroom apartment.

Whatever your hobbies are, finding something that’s going to stimulate and challenge you outside of your 9-5 is vital for getting out of the feeling of dread so many of us are experiencing right now. If you do anything for yourself, make it this.

Adding something new to my days

Part of my feeling of languish was a nagging feeling that I was living in Groundhog Day; give or take a meeting or two, all of my days were essentially identical. The route I’d walk my dog on, the trail I ran on, even what I put into my coffee. I made it my goal to change something each day, even if it was just talking my dog for a walk around a different block than usual once a day.

Setting this as a goal for multiple weeks in a row has forced me to get creative. I’ve woken up 30 minutes earlier to drink my coffee on my rooftop instead of my couch, I’ve tried new recipes, and I’ve even driven to new locations to find different trails to run on—but no matter what change the day entailed, it reminded me that life can still be new and exciting even if it isn’t completely back to normal. The smallest changes can lead to bigger ones, which to me, just meant that I was finally—finally!—feeling stimulated again.

One of the parts of the article that stuck out the most to me was that they mentioned that a universal experience in 2021 is that people are turning to forms of media they already are familiar with. Days before, a friend of mine had mentioned that she watched Mamma Mia multiple times that week even though she could write the script front to back, and I realized I was doing it too: I hadn’t watched a new show since Tiger King. Instead, I was re-watching old favorites that felt comforting and familiar, and while it did, in fact, comfort me, it wasn’t helping what I was feeling.

Instead of re-watching Grey’s Anatomy for the fifth time, I started Killing Eve, something I’ve been saying I was going to dive into for years but never got around to. Watching something that I don’t know how will end or what twists will arise has helped knock feeling that every day is the same. Every time I go to watch a movie, I’ve also been making an effort to make sure it’s something I haven’t seen, and the same goes for my playlists. Gone are my days of listening to the same 40 songs every day while I work or the same 25 while I’m out on a run—switching it up and incorporating new things has made a world of difference.