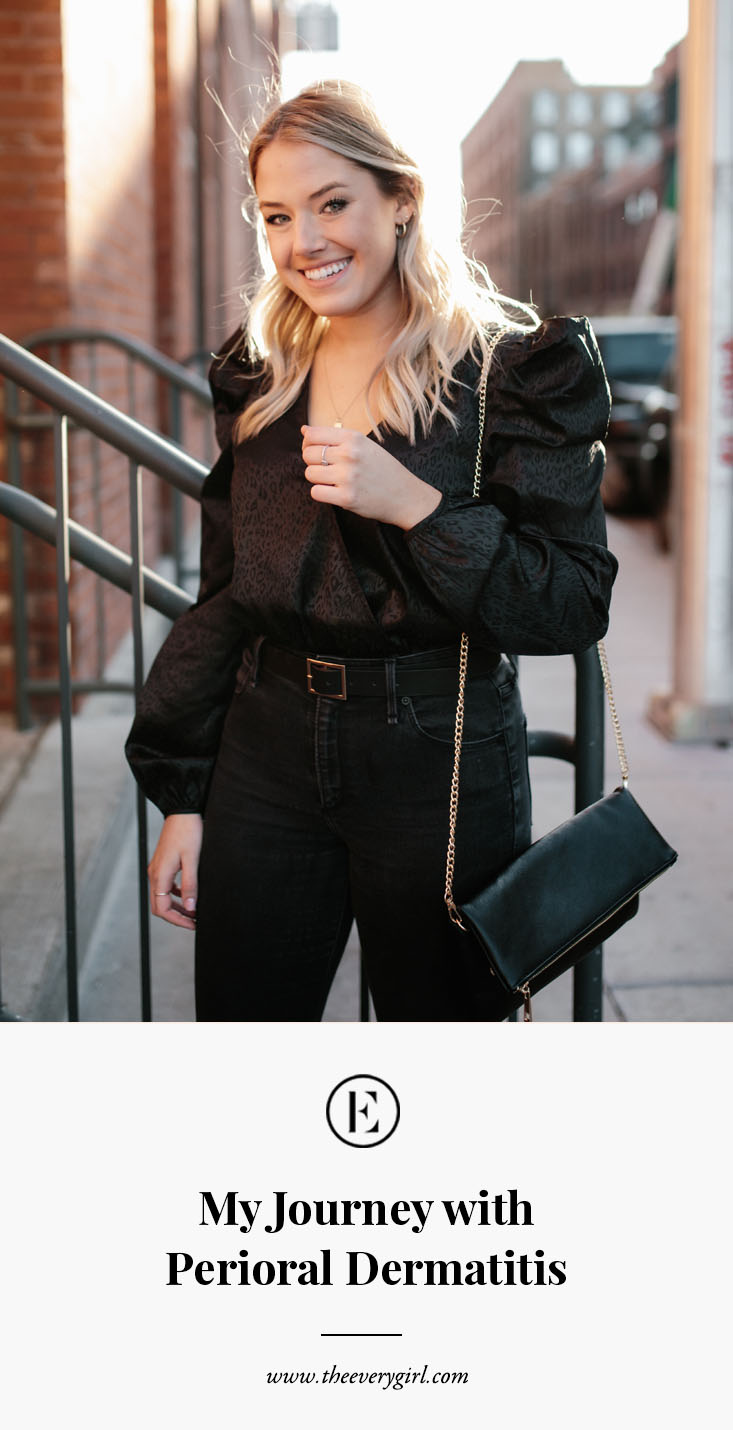 My skin and I have always had a pretty solid relationship. As with any long-term coexistence, there have been some ups and downs, but overall, I’ve never felt I had the right to complain. My mom was proactive with taking me to the dermatologist when I started being a hormonal pre-teen, and some low-grade benzoyl peroxide and salicylic acid prescriptions and my trusty birth control pill have kept the words “hormonal” and “cystic” out of my vocabulary—and for that, I’ve always been grateful. Besides the occasional zit that’s a human’s rite of passage, my skin never caused me much distress—until one day, it did.

It was odd, but I kept up with exfoliating and moisturizing and chalked it up to the results of a bad sunburn. But one day, I woke up, and hundreds of tiny red bumps had taken the place of the dryness. It wasn’t itchy or burning but just felt uncomfortable. I panicked and took an allergy pill and loaded the area up with hydrocortisone, only to wake up the next day with it even worse.

And so began my journey with perioral dermatitis. “To put it simply, perioral dermatitis is a rash around the mouth. As simple as it sounds, it can be one of the most difficult things to correctly diagnose and treat,” said Dr. Fatima Fahs, dermatology resident physician in Detroit, Michigan. “It can involve red- to skin-colored tiny bumps around the mouth, in addition to other areas, like the eyes and nose.” 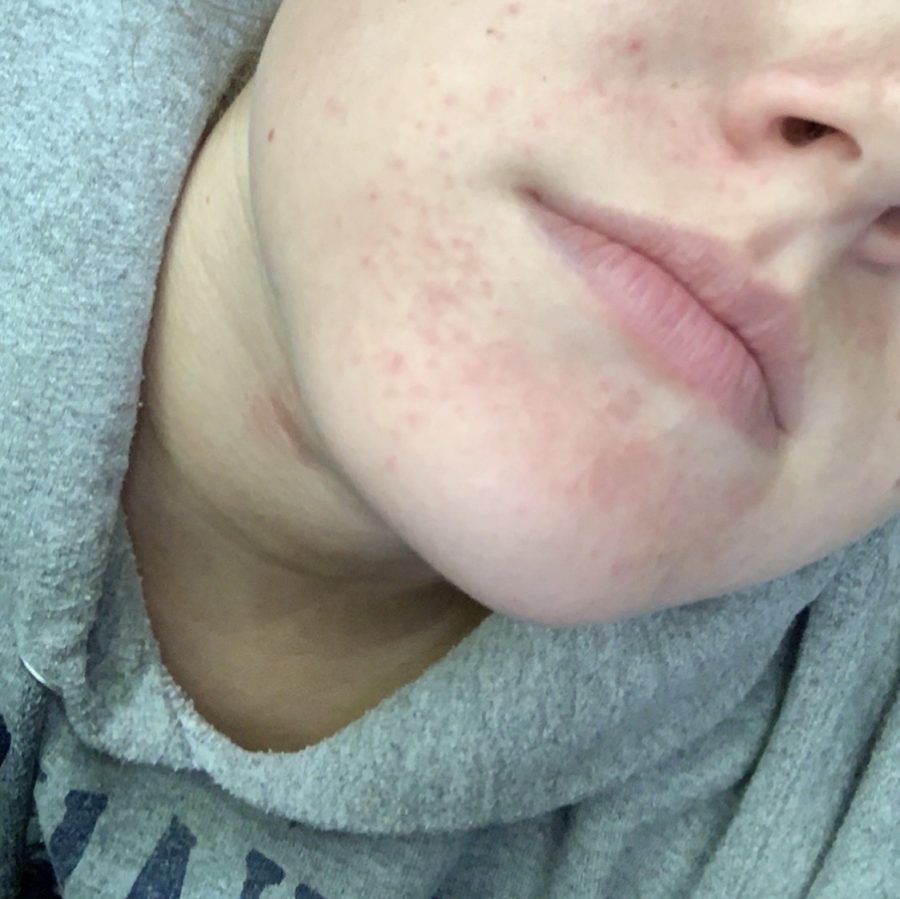 A moderate flare-up in all its glory

To put it simply, perioral dermatitis is a rash around the mouth. As simple as it sounds, it can be one of the most difficult things to correctly diagnose and treat.

I have been to a string of doctors, all of which have more or less told me that treating it is a shot in the dark. My life-long dermatologist told me it was caused by fluoride, so I cut out all products with fluoride, all to no avail. The next derm gave me a 20-minute spiel about what causes acne and told me it was just a case of adult acne, ignoring my explanation of what was happening. The next told me it was maybe caused by the cold, but could also be caused by heat. (An impossible conundrum for someone living in Chicago, who gets yearly doses of both.) The next recommended being on antibiotics until I try to get pregnant—up to 10 years.

It feels like I have tried everything to get rid of it. I went on a full-blown elimination diet to narrow down triggers. I cut everything out of my skincare routine, then and added everything back in one by one; I did the same with my makeup. I have tried and tried and tried to identify what specifically triggers it and what might be the underlying cause—but despite knowing that tomatoes definitely trigger it, it all has been more or less for nothing. My rash comes and goes as it pleases, at times that seem completely random.

“Like many things in dermatology, the most common cultprit is usually a topical steroid,” Fahs said. “For example, applying an over-the-counter cortisone cream to a dry patch on your face can be a major trigger.” Fahs also explained that using inhaled steroids for can be a cause—something I’ve done all my life, and that I need to do for my asthma, which adds another possible trigger to my list. Many dermatologists also believe it can be related to rosacea (which my mom has, and all of the doctors I’ve seen have said can be related). It could be caused either or both or neither of these reasons; and the unknown nature has made treating it endlessly frustrating.

Long story long, having a skin condition that you can’t figure out is infuriating. It feels hopeless and anxiety-provoking—especially since I never know what days I’m going to wake up with it inflamed. It’s likely that I’ll always deal with flare-ups, but for the first time in the past four years, I feel like I finally have a handle on keeping it under control. I haven’t gotten a bad flare-up since December, and I credit it to some trial-and-error success I’ve experienced along the way.

It feels hopeless and anxiety-provoking—especially since I never know what days I’m going to wake up with it inflamed.

Not all of these points are science-based, nor were they all recommended by my physician—these are simply the things that I’ve personally found have helped me.

If you’re struggling with the same symptoms, contact your physician.

In the winter, my rash was worse than it has ever been. One of the problems with it is that nothing topical really soothes it—hydrocortisone actually makes it worse. Then, I read some reviews on the Dr. Jart Cicapair line from sufferers of rosacea swearing that these products are the only thing that calms their irritated skin.

These are not a cure to my problem, but they have greatly helped lessen the frequency of my flare-ups—and when I do have one, they help calm it. It feels so good to know I have products that I don’t need to fear putting on my face for risk of making it worse. The Color Correcting Cream also is the only thing that makes the redness look lessened without caking on makeup (something I never want to do given how irritated the skin feels). I use the Tiger Grass Cream as my moisturizer year-round, and combined with the serum, it has helped me immensely.

This could not be further from scientific, but I tried it one day out of desperation, and it pleasantly surprised me. After one of our editors started washing her face with exclusively honey, I decided to give it a whirl and thought it could help because of its antibacterial properties—and it did. Once again, this isn’t a cure, but when I’m having minor flare-ups, I’ll wash my face with honey instead of my face wash, and I’ve seen my skin respond really well to it. This might not work for everyone—but it’s worth noting.

If you’re going to try this, make sure you’re using pure honey with no added ingredients.

If you go to a dermatologist about perioral dermatitis, they’ll likely give you a prescription for Doxycycline, an antibiotic for infections (all five of the doctors I’ve seen have recommended it). I went on it for a three-month stint (even though my doctor told me I could stay on it, hypothetically, forever). I ended up going off of it because I have a stomach condition that does not respond well to antibiotics, but while it wasn’t the cure that it is for some people, it helped for a while (and I notice since going on it that my flare-ups aren’t quite as severe).

“Seeing a dermatologist for an evaluation would be prudent, as we can prescribe medications to take by mouth or creams to apply such as doxycycline, erythromycin, metronidazole or calcineurin inhibitors, to name a few,” said Fahs.

Whether or not you try this is between you and your doctor, but if you’re hesitant to go on it like I was (because it felt like a band-aid rather than a real cure), I felt it was important to add here to say that while it didn’t get rid of it forever for me, it did help.

One of the many things that I’ve heard about causes of my rash was that it could be linked to a lack of zinc, with a recommendation that I begin taking zinc supplements. Again, this was not a cure, and it’s impossible to say whether it’s helped me directly, but in addition to the rest of the things I’ve tried, I’d give it some credit to keeping it under control.

Before you add any supplements to your routine, make sure to talk to your doctor about what is best for you.

When I saw that a Byrdie editor wrote a piece on her experience with perioral dermatitis, I couldn’t have tuned in quicker. Her journey involves a lot of natural remedies, one of which being the supplement Neem, an Ayuverdic herb for skin health. I am not one to be super into Eastern medicine, but when I read that this editor swore by it in terms of her perioral dermatitis, I literally ran to vitamin shop and got a supplement that day.

Once again, I cannot tell you that this alone made a difference, but in combination with everything else I’ve tried, I believe this has helped. I’ve been consistently taking it for about six months, and I’ve found no reason to stop.

Again, before taking any supplements, speak to your doctor about what’s best for you personally.