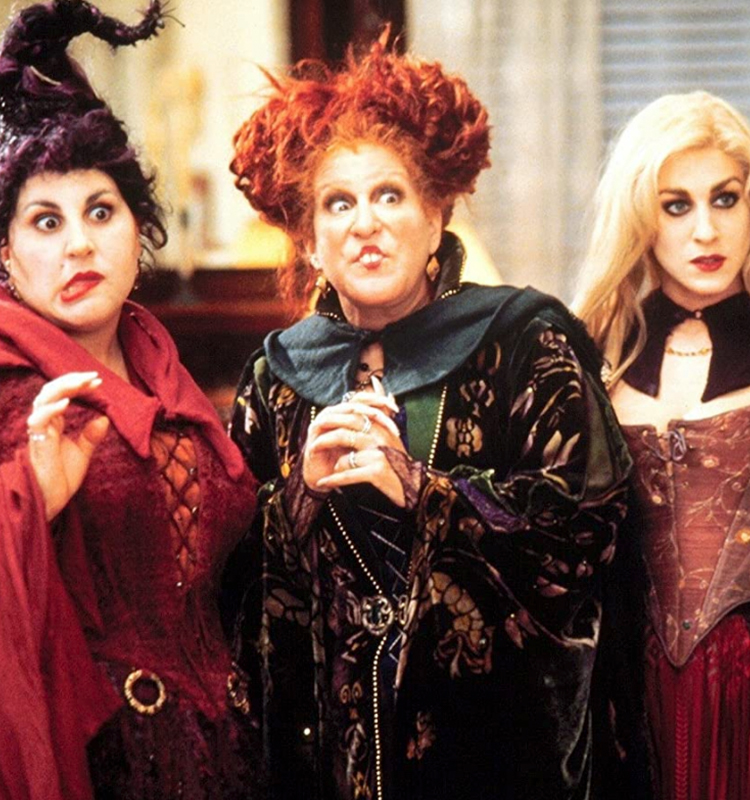 With the arrival of fall comes the joyous season of celebrating Halloween: carving pumpkins, coordinating memorable costumes, eating candy corn, and of course, flipping through the seemingly endless array of gory horror films and teen slasher flicks that make up the selection of Halloween movies on nearly every streaming service.

While I love and appreciate a well done horror movie, sometimes, I’d rather have a good night’s sleep instead of laying in bed wondering if it’s the monster in my closet or the ghost in my building that’s going bump in the night. And I realized that finding a movie that’s entertaining, not nightmare-inducing, and has a plot and characters that capture the spooky season spirit is much easier said than done. Seriously, is celebrating the Halloween season without being scared to go to sleep alone too much to ask for?

Lucky for you, I sorted through a ghastly selection of Halloween movies and found the best flicks for anyone who loves the holiday but hates being scared. Here are the best not-so-scary Halloween movies to watch this October.

If you believe that haunted houses and musical numbers don’t go together, well, think again. Perfect for the adventure-loving, show-tunes singing Halloween enthusiast, The Rocky Horror Picture Show gives you thrills, chills, and an all-around good time. Each character is uniquely creepy, leaving you invested in the movie. Similar to a real walk through a haunted house, each character is adorned in makeup and elaborate costumes, adding a little extravagance to the spooky season. Put on your costume, grab a microphone—a hairbrush also works—and enjoy the show.

Sometimes, I find that the best Halloween movie is the one that makes me want to slip into some cozy pajamas and sip a warm pumpkin spice latte. Without failure, Coco evokes this sudden desire to act like a kid again every time I watch it. With catchy musical numbers, a sneak peek into a Disney-fied version of the afterlife, and the overarching message to never give up on your dreams, this movie is a spooky season ode to all the dreamers out there. Especially if you’re going to be spending this October with family—and want to earn some brownie points as the favorite aunt—and still be entertained, don’t pass up this fantasy film.

If you’ve said that this isn’t one of your favorite Halloween movies from your childhood, you have to be lying—or you need to go watch this movie ASAP. Throughout this flick, we follow Max, a teenager who was begrudgingly dragged into taking his sister trick-or-treating. However, the night becomes a little more exciting than intended when Max revives Salem’s famed Sanderson Sisters, a trio of witches on a mission to take the souls of all of the neighborhood children. Yes, this is a kids’ movie, but its mixture of heartwarming brother-sister bonding and a cute black cat makes this the perfect spooky season film to watch while eating all of your Halloween candy. And, with names like Sarah Jessica Parker and Bette Midler in this movie, you know it has to be a great time. Pro tip: If you’re in the witchy mood this year, the Sanderson Sisters also make a perfect Halloween costume.

If you’re looking for something to get you in the Halloween spirit with a little romance sprinkled into the plot, this is a movie for you. Based on the classic Romeo and Juliet storyline, a lonely zombie named R falls head over heels for Julie. Though the two are crazy for each other, it just so happens that R is a little, well, undead. With a few chuckle-worthy moments, from R’s eternal doom of roaming the airport—which I’m pretty sure would be most of our nightmares—to seeing even a zombie struggle on an awkward first date, the romance in this is heartfelt and even tear-jerking at some points. Of course, we have enough imagery of brains, blood, and zombie flesh to break the cutesy plot up, so this is the perfect movie to watch if undying romances are your thing and you can handle a little gore.

I might not say “Beetlejuice” three times in a row, but I will keep telling you that no October festivities can truly be fulfilled without giving the best dark comedy of all the Halloween movies a watch. The film feeds into our nostalgia fix, as it was released in 1988 and stars a young, nearly unrecognizable Winona Ryder as Lydia, an angsty teen looking to get revenge on her nonchalant, absent-minded father after the death of her mother. Joining forces with a mischievous, eccentric ghoul known as Beetlejuice, the two terrorize the entire household. Oh, and did I mention it’s directed by Tim Burton? Get your bowl of popcorn and sit down for a screamingly good time.

6. Shaun of the Dead

Occasionally, I want to watch a zombie movie without too much gore or seeing brains fill my TV screen. Is that really too much to ask? Well, with the hilarious Shaun of the Dead, it’s not. You’ll be laughing out loud as the undead overrun London. The entire movie is a satire of traditional zombie films, mixing witty jokes with a sense of adventure and the will to stay alive. Shaun, a painfully boring average Joe, finds himself smack in the middle of a zombie apocalypse and sets off on a mission to protect his girlfriend and mother from the undead. Naturally, Shaun decides the best place to hide from the zombies is the local pub; I’m pretty sure that says enough about the playful, slightly scary humans-versus-zombies conflict this movie serves us.

With its delightfully odd characters—Wednesday Addams is a punky aesthetic herself—The Addams Family never fails to make me laugh. With undeniable chemistry between actors Anjelica Huston and Raul Julia, known for their steamy tango scene, the couple proves that eccentricity should always win over modesty. Huston was nominated for an Oscar for her role as Morticia, showing that the movie really does have great casting. I’m giving this one two thumbs up and maybe even an Uncle Fester-style smile.

Sandra Bullock and Nicole Kidman: a dynamic duo. Bullock and Kidman as sister witches? Absolutely iconic. A hidden gem of a movie, the two play witches who walk through society as normal humans, resisting the urge to use their powers—that is, until they realize they can use their magical gifts to control their love lives (oh if only I were a witch). As you can imagine, the rest of the plot solidifies the movie as a rom-com classic and Halloween must-see.

Let me be the umpteenth person to observe that the characters in horror movies are terrible at making smart decisions. If you agree with me, a satire of the most famed Halloween movies might be right up your alley. A comedy at heart, Scary Movie pokes fun at general teen-comedy tropes while also hilariously and quite cleverly commenting on pop culture. With references to scenes from Scream, The Matrix, and The Blair Witch Project, this movie is perfect to throw on and laugh about at the end of a Halloween party; we love the raunchy humor and overall lack of plot—at its core, the movie is really a bunch of teen slasher parodies strung together.

If gruesome meat pies, barbershop visits gone wrong, and delightful musical numbers sound good to you, you’re in for more of a treat than a trick. Played by Johnny Depp, Sweeney Todd, a criminal back in town after 15 years of imprisonment, seeks his revenge on the townspeople by slashing their throats and shuttling the bodies down to his partner in crime, Mrs. Lovett, to use in her meat pies. While the whole plot is utterly disturbing, the musical numbers and catchy tunes distract from what is really going on and adds a lighthearted feel to the mix. If you’re a fan of musicals and want just a little horror, this is the perfect film for your Halloween night.

No childhood could be complete without watching Coraline at least once—or maybe 100 times. While the movie is directed toward kids, it’s just creepy enough to entertain an older audience and carries more adult themes, such as the notion of identity, appreciating what you have, and relationships with family. The movie follows Coraline, a girl who had no choice but to move to a new, boring town with her parents, who both seem too busy to pay attention to her. Soon, Coraline’s new place turns out to be not so boring, as she discovers a portal to a parallel world in which her parents are attentive, fun, and magical. Things, however, are not as they seem, and she quickly realizes that not only does she have to save herself from a false reality but her family as well. Told in the form of stop-motion animation, Coraline is heartfelt and creepy—what better movie to celebrate the season with?

How to watch: SHOWTIME, Amazon Prime from $3.99

Of course, we can’t run through a list of Halloween movies without discussing one of Alfred Hitchcock’s many classics, Psycho. Notorious for its shower slasher scene, this 1960 film has earned itself a reputation as one of the best psychological thrillers of all time. In the ultimate heist, secretary Marion Crane, along with her boyfriend, steals $40,000 and travels the backroads to avoid the police and get away with her crime. Of course, things start turning awry when Marion stops at the infamous Bates Motel, where she meets questionable characters and, ultimately, her demise. Probably the scariest movie on this list, Psycho will leave you a bit creeped out, but you’ll still be able to fall asleep at night.

Proving that some of the best spooky season flicks come from the ’80s, the first two Ghostbusters movies deserve all the hype. Set in New York, a group of ex-professors starts their own ghost extermination business, unleashing a portal to a demonic otherworld. With just the right number of jump scares and campy comedic relief, Ghostbusters holds its own as one of the best ghost-themed movie franchises of all time. Whether you’re in the mood for a laugh or are trying to prove that you can watch a ghost movie without having nightmares—I may be speaking from experience here—give this trip to the world of the supernatural a watch. But watcher, beware: The team’s creepily catchy theme song may haunt you into November.

Who better to spend your Halloween with than Casper the friendly ghost? Every time I see this film, I’m taken back to being a kid, eating Snickers, and watching this movie from my family room floor. Christina Ricci proves that even in her youth, she could hold her own in any spooky movie. Kat and Casper’s friendship is adorable, and the antagonist of the film, played by Cathy Moriarty, is the perfect parallel to the otherwise mellow characters. If you want to watch something that takes you back to the good old days of trick-or-treating instead of being the one to pass out the candy, this is one of the best movies for you. 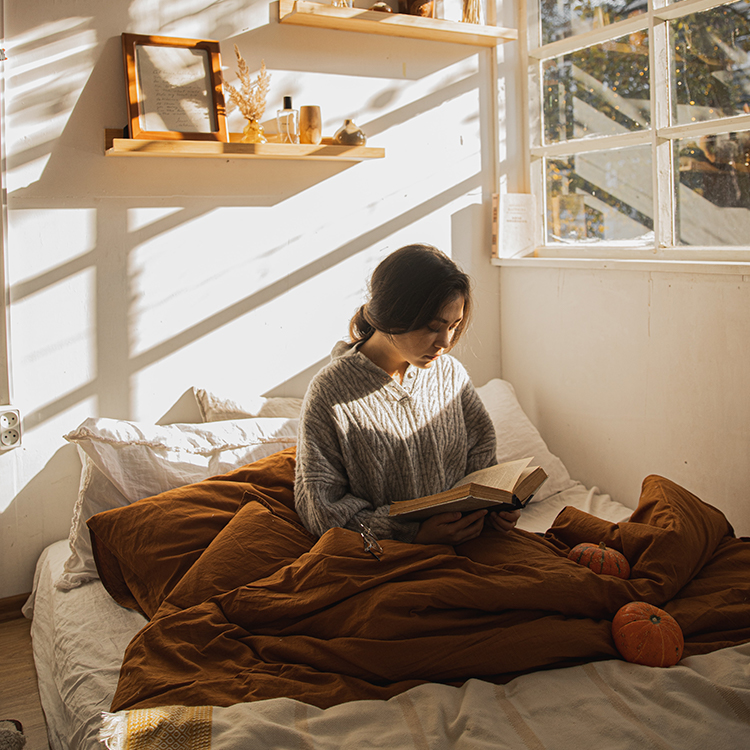 13 Thrillers to Read This Month (Because Halloween, Duh)
READ NOW