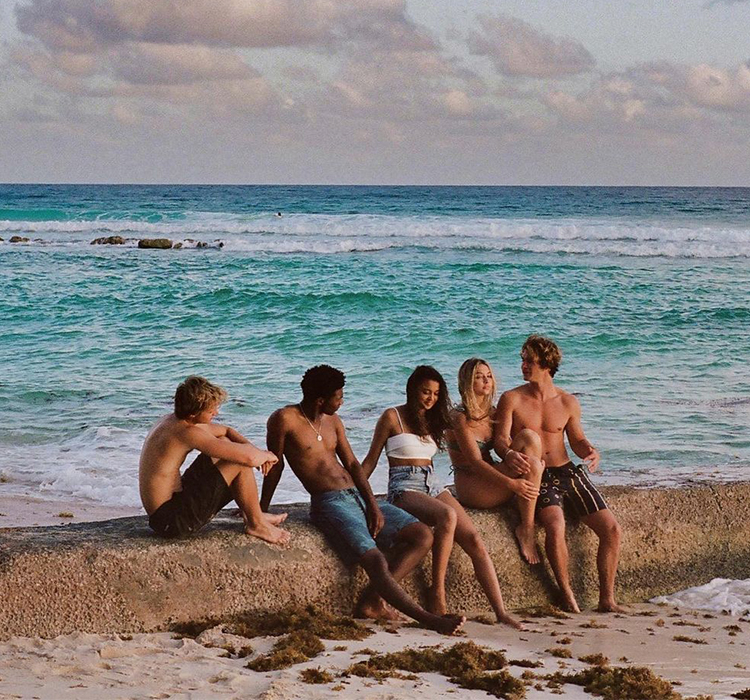 Like most people with a Netflix subscription, I was sucked into the world of Outer Banks during April 2020. I was absolutely obsessed with the show (still am) and binged it in less than 48 hours. I’ve come back to it since then, putting it on whenever I need a little escape from real life. The show seemingly took over the world when it came out—I swear, every TikTok I saw, person I talked to, or Instagram post I scrolled past was singing praises and wanting more.

From the moment it got renewed for a second season, I’ve been anxiously awaiting the return of the Pogues to my screen. And after a long 15 months of production delays, watching behind-the-scenes snapshots from the cast on social media when they finally did start filming, and guessing about what day it might return, it’s finally time.

When Netflix dropped the trailer for OBX2, I was immediately transported back into their world, wondering what exactly was going to happen and counting down the days until July 30. If you’re just as excited as we are, this one’s for you. And if for some reason you haven’t seen the first season yet, stop reading and go check it out while you still have time to catch up because warning: There are major season one spoilers ahead.

But before we get into what we’d like to see, here’s what Netflix gave us in the trailer…

Now that we’re all caught up and excited, here are eight things we want to happen in Outer Banks season two:

This had to be first on this list because I want this more than I’ve ever wanted anything from a fictional TV show. We saw JJ go through so many hard moments in season one—from his relationship with his dad to his struggle with self-worth to taking the blame for sinking Topper’s boat for Pope. I would love nothing more than to see JJ just be happy this season, whether that’s through a love interest, a path to a better family dynamic, or even, like, a dog?

John B. struggled a lot in season one. He didn’t know where his father was, what happened to him, or if he was even alive, but he at least got some closure when he finally learned the truth (which, if you don’t remember, was that Ward and Big John were working together to find the Royal Merchant gold; they got super close and Big John thought he deserved more than a 50/50 cut, then they got into an argument on a boat in which Big John falls and hits his head, and instead of taking him to get help and save his life, Ward pushed him overboard and left him for dead). So with all of that in mind, I think there’s definitely more room for John B. to process what happened, and Ward will hopefully face consequences for what he did. Also, the season ended with an island-wide lockdown and a giant manhunt for John B., all over a crime he did not commit. Although he definitely did some sketchy (and illegal) things throughout the season, he definitely didn’t shoot the sheriff—so I’m going to need his name to be cleared for that one.

3. The downfall of Ward and Rafe Cameron

Speaking of shooting the sheriff, I’m really hoping that the cops come around and believe John B., Sarah, and the rest of the gang when they tell them it wasn’t John B. but Rafe who shot Sheriff Peterkin. Rafe was clearly in a downward spiral at the end of the season, and I think it would do him good to actually face some consequences for once in his life. And don’t even get me started on Ward. He is the literal worst, and aside from the aforementioned situation with John B.’s father, the number of other people’s deaths that he’s responsible for is truly alarming. He’s also just not a good father or husband—he consistently lies to his family and is clearly the reason that Rafe is the way he is. I would love for him to not only be put in jail and never see a cent of the gold, but also for everyone (including his family) to realize that he’s not the model citizen he appears to be.

First things first, season one ended with JJ, Pope, and Kiara believing that John B. and Sarah died when the boat overturned during the storm, so I need them to find out ASAP that they survived (I can’t handle any more JJ crying scenes, OK?). In my opinion, the best part of OBX season one was the chemistry among the Pogues. The cast is close in real life, and I think that really shines through in their acting. I loved watching them dance and laugh together at Kie’s family’s restaurant, hang out on the boat together, have each other’s backs at the Midsommar party, and just comfort each other through the hard times. Needless to say, I’m very excited to see more of the little things—the moments when a group of friends is just having fun, hanging out, and having real conversations with one another. #P4L, am I right?

We got painstakingly close to the Royal Merchant gold being in the hands of the Pogues last season before Ward Cameron rudely ruined everything once again by eavesdropping on Sarah and John B.’s conversation (per usual) and discovering that they had found the gold in the well under Ms. Crain’s house. He then used his wealthiness and privilege to purchase the land and excavate the gold himself. John B.’s father devoted his whole life to finding that gold and even died trying, so it only seems right that John B. gets to finish the job. While I presume it won’t be easy (because what kind of show would that be?), I do hope the gang gets the pay they deserve in the end.

Although Topper was the actual worst for most of the first season, in the second to last episode, we saw him have a little change of heart. If you don’t remember, he decided to actually help John B. and Sarah when he distracted the cops by wearing John B.’s hoodie (the bright orange one that all of the cops were looking for), as the real John B. and Sarah escaped the bell tower. While I will never forgive the way he treated Sarah—namely, not reacting well when she changed her mind about having sex with him, befriending her crazy brother, and calling her a whole slew of inappropriate names—and the general way he acted throughout most of the season, there’s still a chance for him to have a little more redemption. I’d love to see him realize the things he has done wrong, apologize, and make some real progress toward becoming a better person.

Madelyn Cline and Chase Stokes won “Best Kiss” for their kissing in the rain scene at the MTV Movie & TV Awards for good reason. They have undeniable chemistry (I mean, they are dating in real life, so that’s probably why), and I can’t wait to see how that chemistry continues to shine in season two. Plus, according to the trailer, we’re starting the season in the Bahamas, and while it might not be a relaxing vacation, it’s still romantic. I’m excited to see how their relationship matures and grows. However, if I just jinxed it and they end up breaking up this season, I’m going to need a minute to recover.

Ah, the question we were all wondering throughout the entire first season: who should Kiara be with (or should she just be the boss babe she is on her own)? Personally, I was rooting for a JJ and Kie love story the entire time. Needless to say, I was shook when Pope confessed his love and Kie denied him, only to change her mind and show interest in him in the end. I mean, I love Pope just as much as the next gal, but did everyone see how she comforted JJ during the hot tub scene? Whatever happens, I hope that they all end up happy and that no friendships are ruined in the process.

As I’ve mentioned about 100 times now, I am beyond excited for the premiere of Outer Banks 2. I can’t think of another show in recent memory that has had the same effect as this one, in that a whole generation of people clung to it like John B. and Sarah clung to the overturned boat in the final episode (sorry, I had to).

Although the show might be overly dramatic, unrealistic, and a tiny bit cheesy, what entertaining show isn’t? Outer Banks provides us with an escape unlike anything else, and the complexity of and chemistry between the characters is unmatched. I can’t wait to binge the season in less than 48 hours again, but I’m already dreading the sadness that will come when it’s over. So, let’s grab our bandanas and tropical button-down shirts and get ready for what’s bound to be quite the journey.

Season two of Outer Banks premieres on Netflix on Friday, July 30. Don’t forget to catch up on season one while you wait!