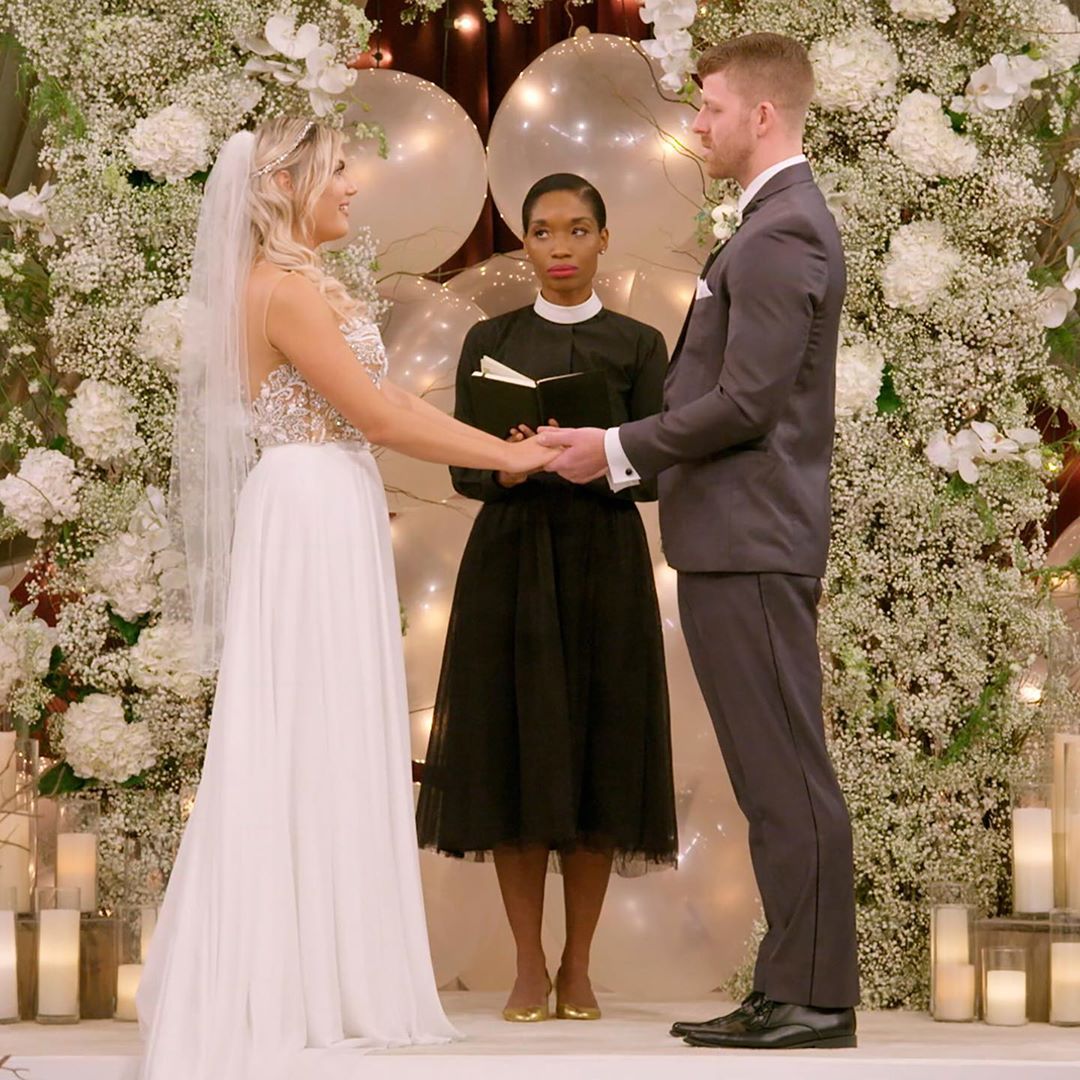 I’ll be the first to admit that I don’t really like reality TV. It took me until Jojo’s season of The Bachelorette to get into that franchise, and I still only like it because it gives me something to talk to my coworkers about. I’ve never been able to get into Real Housewives, Survivor, Love Island—heck, I only really like American Idol (and The Voice now that my man Nick Jonas is a judge).

So if you told me that I’d binge this Netflix original love competition show in two days, I’d laugh in your face. But alas, that’s exactly what I did. Love Is Blind captivated me like nothing else. If you haven’t watched it yet (please just do it so I have more people to talk about it with), here’s how it goes: in an experiment to see if love is really blind, singles are paired up on dates where they sit in what is called “pods” that are separated by a wall. They can’t see each other, but they can talk as if they’re in the same room. If they fall in love, they get engaged, and then they’re finally able to see each other physically. Then, they must spend two weeks together—they move in with each other, meet each other’s family and friends, and plan a wedding. The show ends with their weddings where you see if they go through with it and see if love is really blind. It sounds messy, and it is. And that’s why everyone loves it.

Throughout the entirety of binge-watching the show, I just kept texting our Everymom Managing Editor Julia that I would be perfect for this show. (I still stand by that statement, @Netflix.) I learned a lot from the couples on this show, so here were my biggest takeaways. My ultimate thought? Love can be blind if you abide by these simple rules.

Just a reminder: spoilers ahead if you haven’t watched the last wedding episode!

You can’t expect to find a connection in the pods that will heal you; you have to heal first before you can truly accept that kind of connection and love. Carlton, for example, had a lot of inner issues he needed to deal with and make sense of before he brought someone else into his life like he did with Diamond. I know it’s a cliche, but knowing yourself and accepting your own flaws is necessary before you embark on a journey like that.

Jessica, on the other hand, expressed a lot of the issues she had with Mark, but she continually let them get to her and cloud her judgment. She said that her high standards got in the way of love in the past, but then she didn’t break from that when she kept saying that Mark wasn’t her type (but she was somehow also in love with him … it was confusing). Jessica knew what her issue was, and finding love in the pods obviously couldn’t fix it. You can’t expect love to fix all of your problems.

2. Attraction is important, but it’s not the only thing

Watching Lauren and Cameron say they love each other 35 minutes into the first episode is … wild. Maybe it’s editing, or maybe it’s acting, but it’s hard to open up and be vulnerable with someone, and the fact that they can do that so quickly and easily with each other to get to the point of “I love you”s so fast has to mean something. After Cameron and Lauren are engaged and finally get to see each other, Cameron says that seeing Lauren only confirmed that he loved her. His attraction to her only grew from the connection they already created. Lauren even said she had never been with someone outside of her race and she probably wouldn’t have gone for him outside of the pods, but she fell in love with who he was over how he looked.

Being attracted to your partner is important; I wouldn’t say love is ~completely~ blind. But it’s definitely not the most important or the only measure of love and connection in a relationship. Love Is Blind can teach us all that if we take chances on people we wouldn’t normally be interested in, we could surprise ourselves.

3. Be yourself from the start

While it’s become a huge meme that Jessica’s voice goes back and forth from baby voice to normal voice throughout the show (especially when they’re in the pods), there are a lot of love lessons to be learned from this. Luckily for Jessica, Mark was completely in love with her regardless of her baby voice, but it showed from the start that Jessica felt like she needed to change herself or be someone different (and we all know how their relationship turns out—even if you haven’t watched the finale, that reunion pic says it all). Being yourself from the get-go makes sure that you and your partner don’t have anything to “reveal” or hash out later in the relationship.

4. Watch out for red flags—and actually act on them

As much as we want to think the people we love are perfect angels who would never do us wrong, that’s not always the case. As shown by both Mark and Jessica and Carlton and Diamond, people you love can show red flags … over and over again. Jessica brought up so many issues to Mark and was constantly discussing things that Mark didn’t agree with (such as saying she wouldn’t want a family at 24 or, most importantly, drunkenly flirting with Barnett and then telling Mark she thought Barnett was sexy while in bed with each other #yikes), but he kept brushing them off and making excuses for her.

5. It’s only an issue if you make it that way

I could discuss my confusion (that’s a nice way to put it) with Jessica until the end of days. Throughout the show, she’s all:

Whether it’s an age difference, race, gender, a personality trait, or that they love your rival team (me @ Golden State Warriors fans), no one else is making this a deal-breaker but you. Once you let go of the things you think you need in a partner, you might find the person who actually makes you happy.

6. Attraction is about more than a face or body

This experiment was interesting in that everyone involved was pretty much a conventionally attractive person. However, there were still instances when the partners weren’t attracted to them physically, whether it was because of hair color, height, or just their overall presence. I was entirely confused when Kelly said she wouldn’t find Kenny attractive outside of the experiment (hello, Kenny, hmu), but as she explained why, it began to make sense. Attraction is about more than how they look; it’s how you feel around them. In this experiment, it’s hard to deal with that because they fell in love before feeling their presence through body language. You can think someone is hot, but their body language and their presence just throws you off.

7. Listening before reacting is key

Giannina and Damian fought quite a bit after they got engaged in the pods. I’m no relationship expert or anything, but as an outsider watching her scream at him and him sit there awkwardly, they would understand each other more if they actually listened to each other during their fights. They both just immediately react to each other’s statements, but don’t take the time to really comprehend what the other is saying. Damian got angry when Giannina said he was being awkward at the birthday party, and then Giannina got angry at him being angry … It was really a mess all around.

Most of us know the importance of active listening in all of our relationships, but Love Is Blind was a strong reminder that even if you think you have this unbreakable bond with a person, you might not completely understand them all the time. (And that’s OK!)

In the first three episodes of Love Is Blind, I was seething with anger over the obsession with Barnett. I didn’t get it. He was the typical pod f*ckboy if you ask me. Then, when he picked Amber, I was like, “Ope, game recognizes game.” By the wedding episode, I had followed both of them on Instagram and was so #TeamBarnettandAmber that watching their wedding made me legit cry. (I wish I was joking for dramatic effect, but literal tears were shed.) I had judged them so much, and from the beginning, I assumed their connection wasn’t strong and they would never go the distance.

In reality, the two felt something with each other that I couldn’t understand, and I have to applaud them for it. If two people seem wrong for each other in your eyes but they both seem happy, don’t judge them and let them test their connection on their own.

9. If you disagree on something, set boundaries

In the later episodes, Giannina and Damian kept having the same recurring fight over how much Giannina was on her phone and on social media. Damian disagreed, and Giannina just kept making excuses that it was her job. They kept getting in the same fight because they never came to a conclusion. In this situation, the two would have benefitted from setting boundaries on social media use and when and where it would be OK for them to use it and post.

On Thursday, March 5, tune in to Netflix’s YouTube channel to see the Love Is Blind reunion special. Who stayed together? Who split up? We’re ready for all the tea to be spilled.