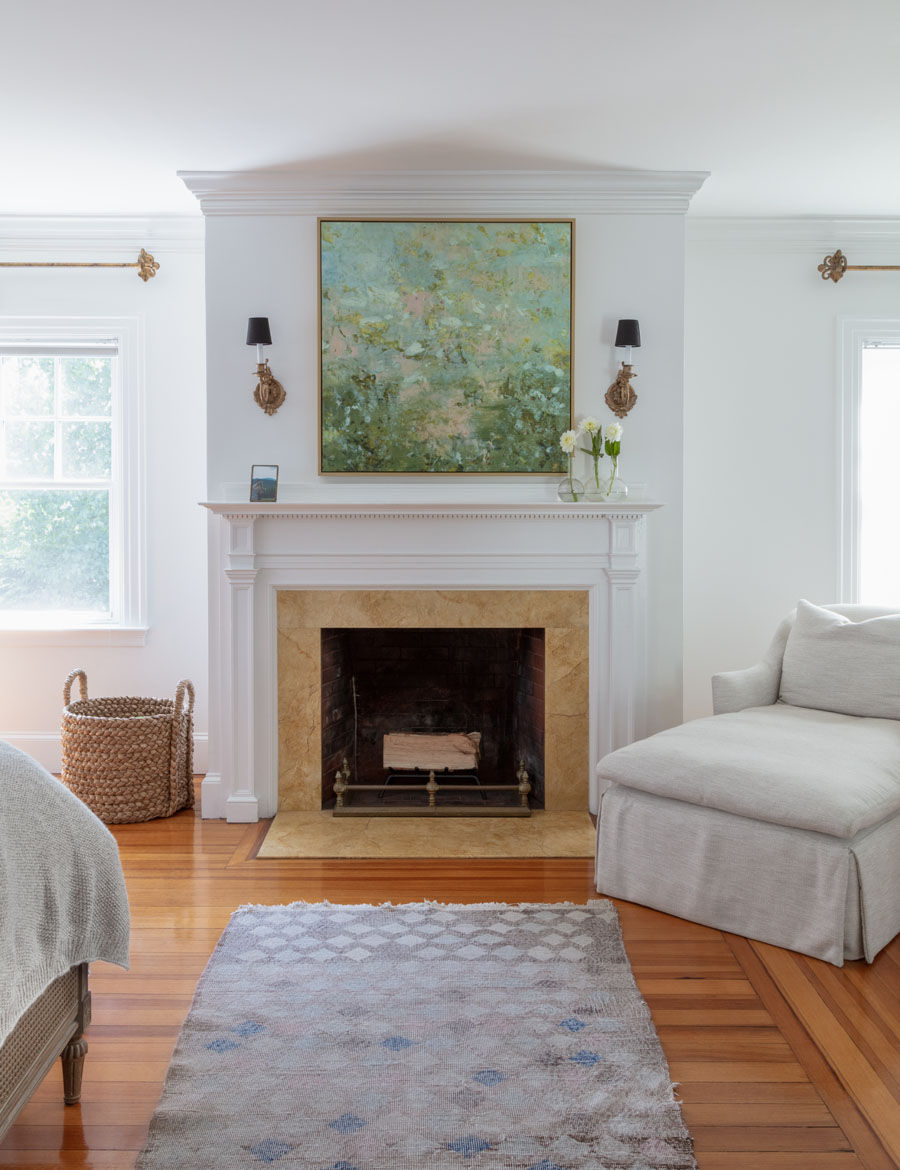 Kelly McGuill and Gabby Soule love interiors. It’s probably not surprising, given that McGuill owns Kelly McGuill Home, a Boston-based design firm, and Soule works alongside her, but they really do. After all, it’s what led both of them to their careers as interior designers.

McGuill didn’t start out in the field. She said that it began sort of organically, as people started to ask her if she would help them spruce up this space or that one. She had worked as a creative director and stylist, but not officially as an interior designer. Soule, however, studied interior design in school and then joined McGuill and her team. They work hard to make every space in which they work really reflect the people who live in it.

Being in Boston, it’s also safe to say that they work in some homes that are full of history (and plenty of charm). So, the age-old question is: work with the history, even play it up, or rip it out in favor of more modern touches? For McGuill and Soule, that’s a sort of complicated question — it’s not quite as simple as all that. “I think we like to kind of mix together both. Like we love — if the house has some great architectural elements — to keep it,” Soule said. 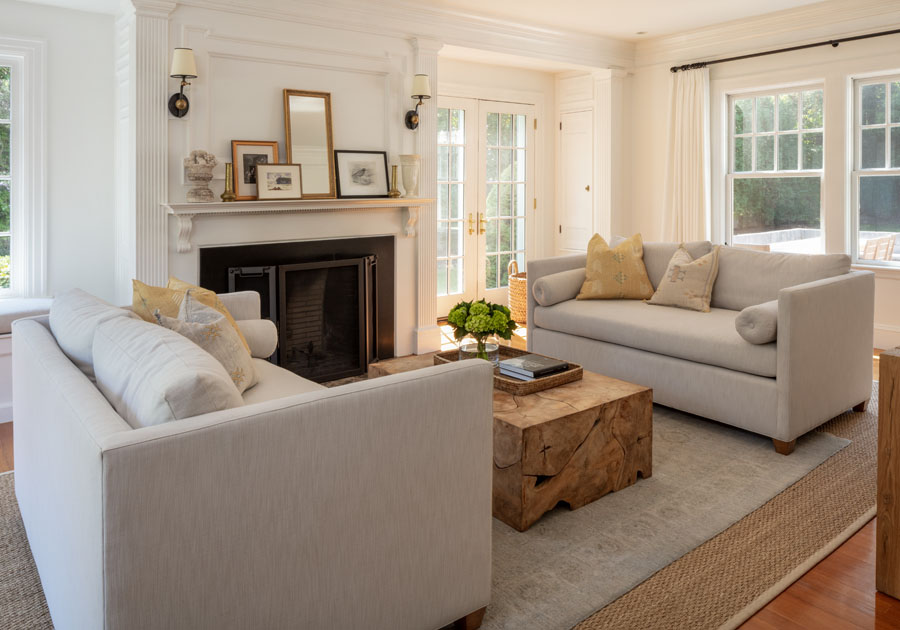 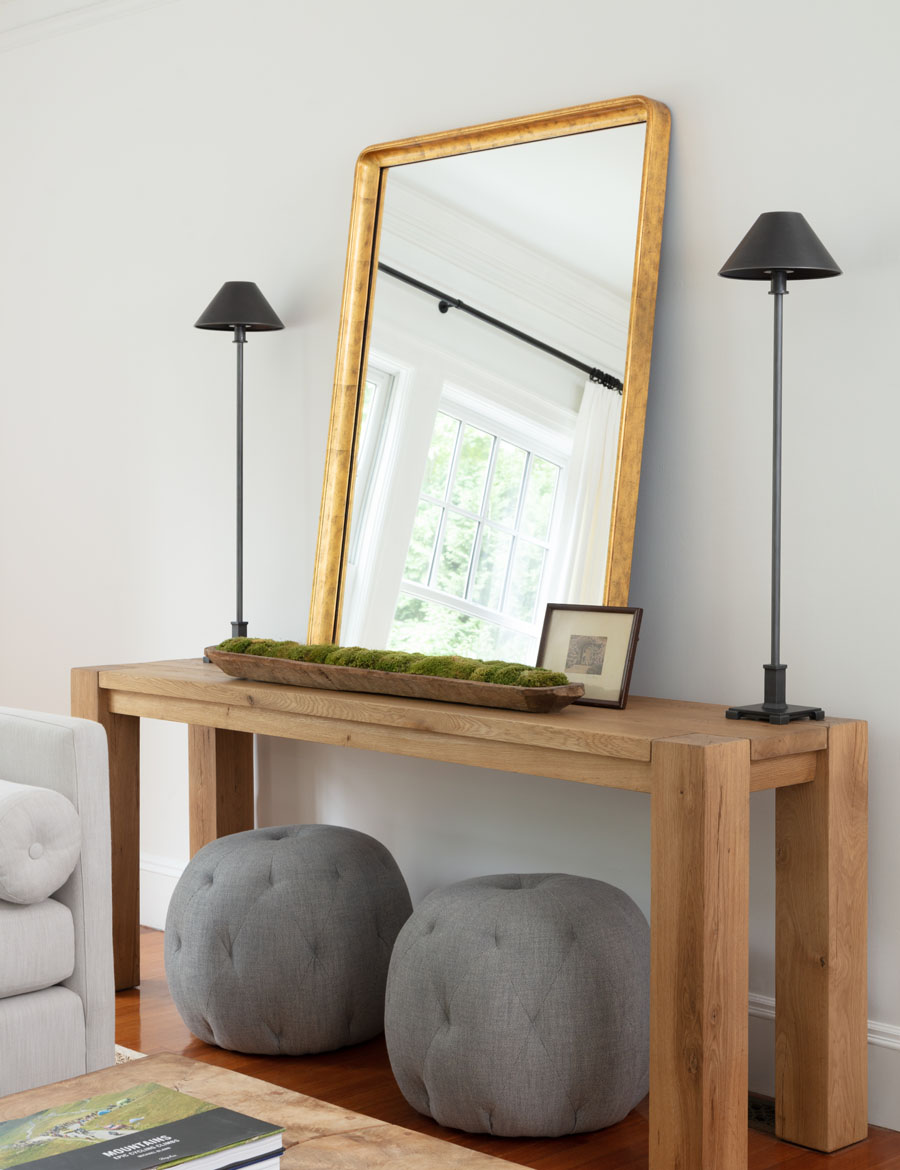 For one home in particular, it also came down to where the client wanted to keep those charming details and where they were ready to move on from them. “When we first started working with them, we did almost their entire house except for their kitchen,” McGuill explained. “And the kitchen was like a really traditional dark brown kitchen that the previous owners had kind of created for themselves, but you could tell that they were trying to kind of stick with the feel of the house that was maybe 80 or 90 years ago, when it was built, but it wasn’t them, it wasn’t our clients. And we kind of feel like the best houses — like sometimes the houses that are really old and have a lot of history — if you add some modern touches, you can make this great contrast that works so beautifully in spaces.”

“In this kitchen, we added all the black windows and the black doors, but the moulding and baseboard that’s around them is also throughout the rest of the house,” Soule added. “So it all has a nice flow.”

The best houses — like sometimes the houses that are really old and have a lot of history — if you add some modern touches, you can make this great contrast that works so beautifully in spaces. 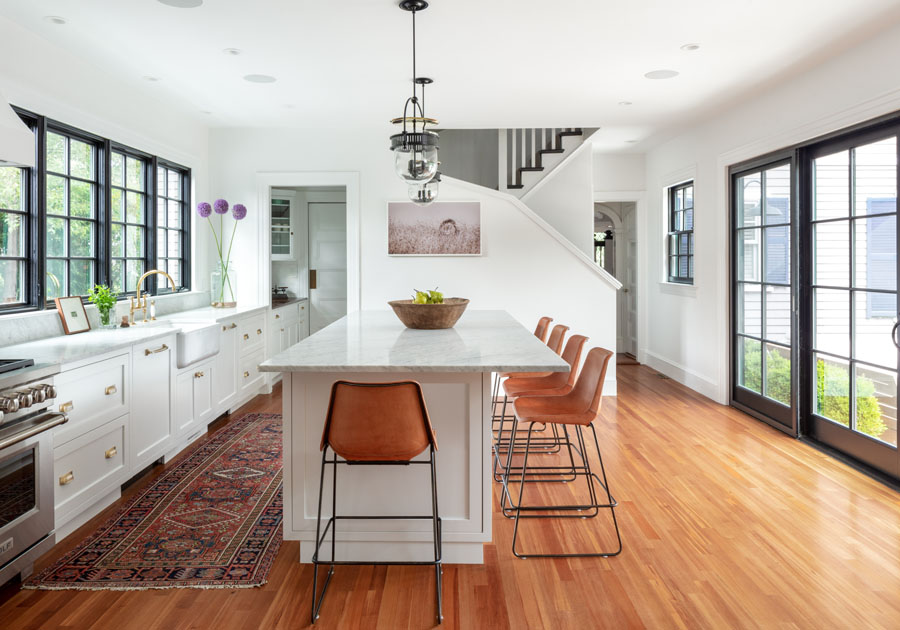 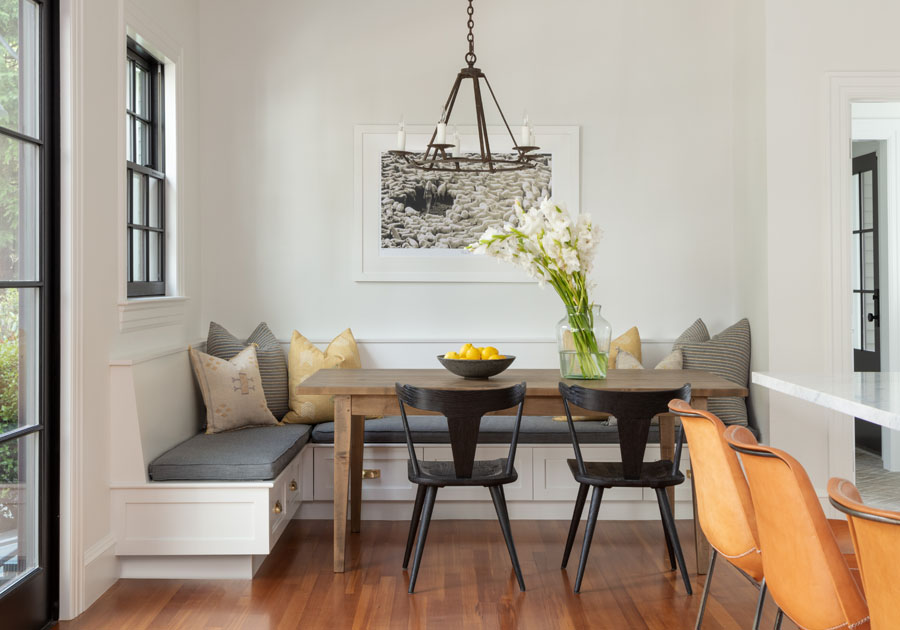 The black windows and doors — and the idea of contrast — are features that both Soule and McGuill really love right now. “I’m not a real trendy person, but I’ve kind of loved — for my home and even sometimes for clients’ homes — that thing that’s not really a trend, but contrasts. Black and white, shiny and dull, all of those things. Again, not that it’s a trend, but I feel like there are elements that can come from that like brass, that’s definitely kind of trendy now, but I feel like it’s also — like Gabby said — it’s also timeless and classic. It’s been used in other countries and spaces for hundreds of years. I feel like those are the things that work really well.”

Embracing contrasts when you’re trying to pull together your own space (but doing it in an intentional way) can really elevate what you’re doing and give your space that something extra. And pulling in something unexpected — like the black windows — to create that contrast can be even more of a show-stopper.

Embracing contrasts when you’re trying to pull together your own space (but doing it in an intentional way) can really elevate what you’re doing and give your space that something extra.

“I love the black-scale windows,” McGuill said. “Is it a trend? I don’t know, but it’s so good. I just feel like it’s the perfect balance of so many things. I feel that it may be a trend, but I also feel like it could be something that’s around for a really long time.” 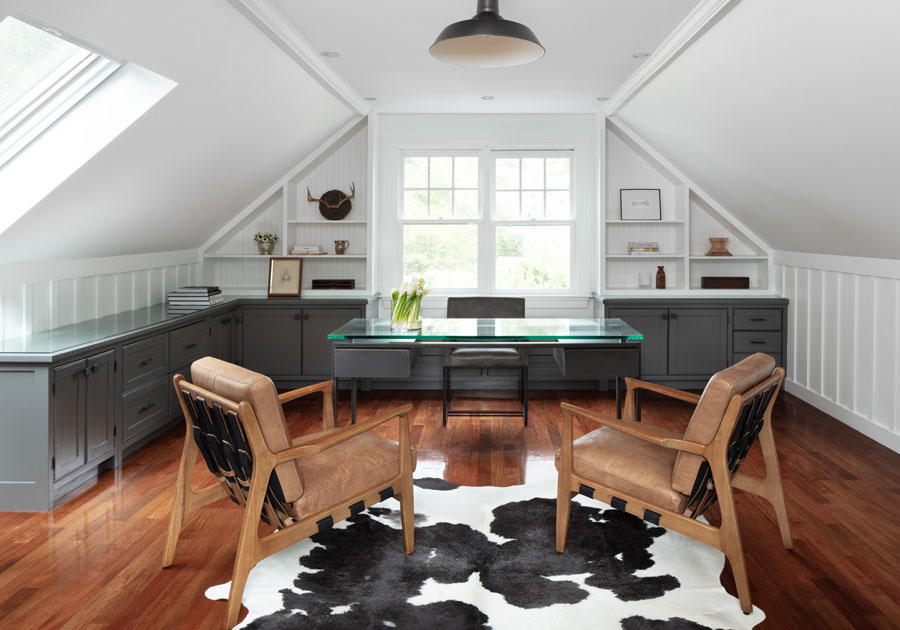 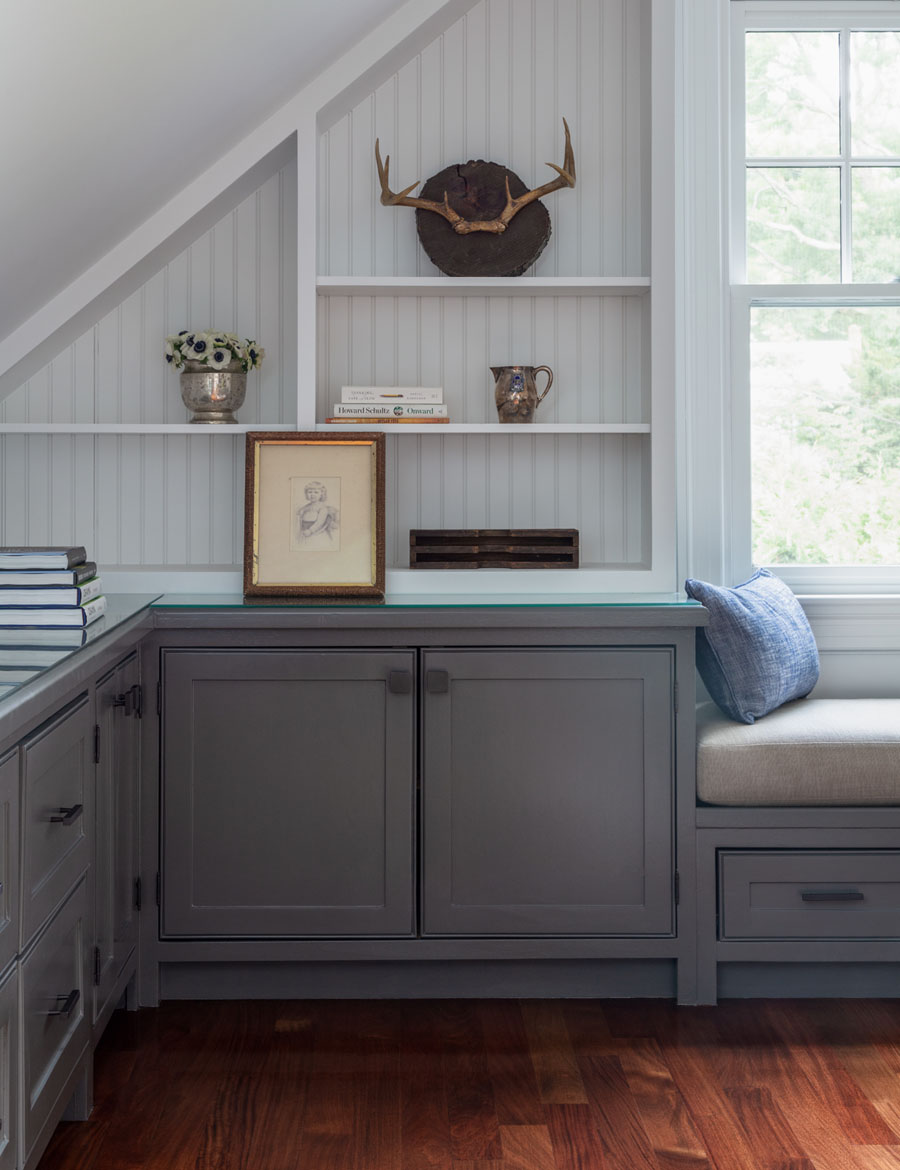 If you’re looking for a design choice that will look great in just about any space, no matter how much or how little you’re able to do at the moment, spring for white walls. Both McGuill and Soule agree that it’s a classic feature that can’t steer you wrong.

“I love white walls,” McGuill said. “I have a house here in our town and then I have a Cape Cod house and I just, I love white walls. I just feel like everything, like I said earlier, everything kind of comes to life. I love hardwood floors against the white walls, and I love texture and I love black light fixtures and I feel like I’ve had this house in Walpole for like 25 years and it’s always done the same thing. I just can create and add new things to the space and it always looks great. It’s timeless for me.”

Who among us doesn’t love an amateur-friendly design tip that you just can’t mess up?