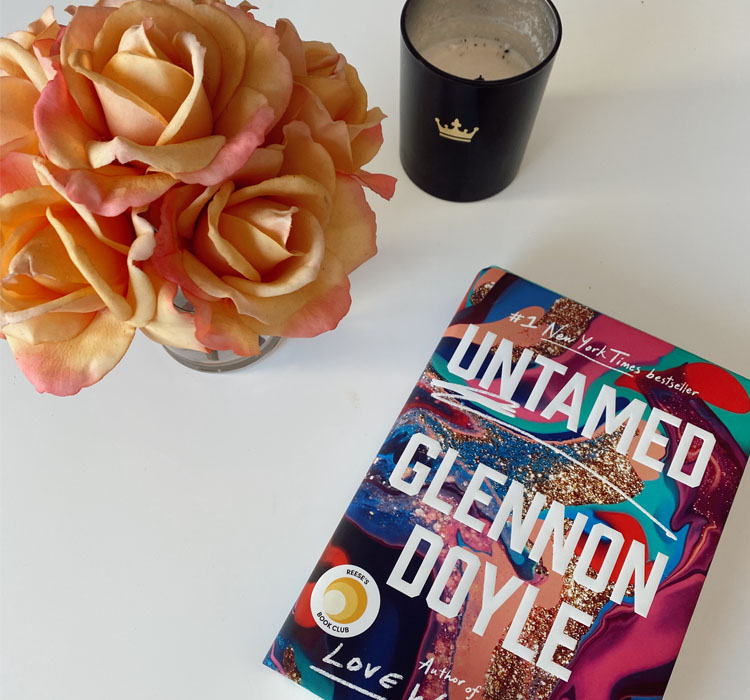 Yes, I have a natural flair for drama, but I can say without any exaggeration that Untamed by Glennon Doyle changed my life. It got me to rethink what I truly wanted, and now I’m questioning everything. In other words, it’s not a light summer beach read. This is now the part where I say that I read the book (three times) so you don’t have to, but it’s so good, you still need to read the book. I certainly cannot get the point across like Glennon can, and her writing will undoubtedly tug at your heartstrings in the least cliché way possible. But until the book downloads on your Kindle, here are seven lessons I learned from Untamed that were (for lack of a better word) life changing. 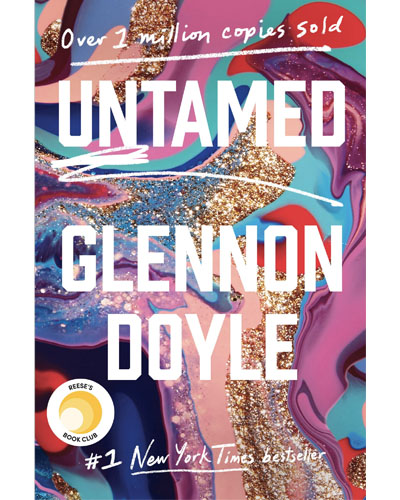 We strive so mightily to be good: good partners, daughters, mothers, employees, and friends. We hope all this striving will make us feel alive. Instead, it leaves us feeling weary, stuck, overwhelmed, and underwhelmed. We look at our lives and wonder: Wasn’t it all supposed to be more beautiful than this? We quickly silence that question, telling ourselves to be grateful, hiding our discontent—even from ourselves.
Shop now

So you know that anywhere the book’s title comes up throughout the copy is something you need to pay attention to, right? Glennon name-drops the title for the first time in the prologue, so you know it’s a BFD. She talks about a domesticated cheetah at the zoo, who probably knew all its life that something was just off. While I’m a big animal rights person and admire Glennon for raising awareness of wild animals in captivity, the point is that we are all cheetahs. We’re taught to be in cages and are groomed to live a certain way.

Glennon explains that we learn to be “good” around age 10. We start learning what feelings we can express and what feelings we can’t. We learn the body we are supposed to strive for, how to behave as a woman, and what kind of life we are supposed to want. I pondered on this one for a while because I don’t feel like I’m naturally “wild” or suppressing who I’m meant to be, but I realized the point is not just to dare to be different (Glennon would never be so cliché). Instead, it’s about knowing the difference between what you want and what you have been trained to want. My (but mostly Glennon’s) advice to you: Question every decision by asking yourself if your choice will truly make you happy.

2. Be still and know

Does anyone else feel like they need to ask every other person in the world for their opinion before you ask yourself what your own opinion is? Whether it’s what to eat for dinner, what to wear, which job opportunity to take, or how to text back the person you like, I’ve noticed that external validation is not only my default, but also the default of most women I know. We poll a group text when in a fight with a significant other or ask each other whether or not we should leave a job we don’t like. I even find myself asking my boyfriend if I should go to the bathroom before or after the appetizers come (as if other people have some secret insight into my biological needs that I don’t have).

Even when it came to whether or not Glennon would leave her husband, she went to Google and relationship books before she asked herself what she wanted. After realizing this, Glennon sat in a dark closet (inspiration strikes where it may) to give herself time to be still and let the answers come to her (and from her), rather than busily searching for answers externally. Only you know what’s right for you if you could just be still enough to listen to yourself. Now, I hear Glennon’s words in my head in any situation, whether it’s starting a business, a move across the country, or the dilemma of when to go to the bathroom: “I now take orders only from my own Knowing.” And I know, every time. 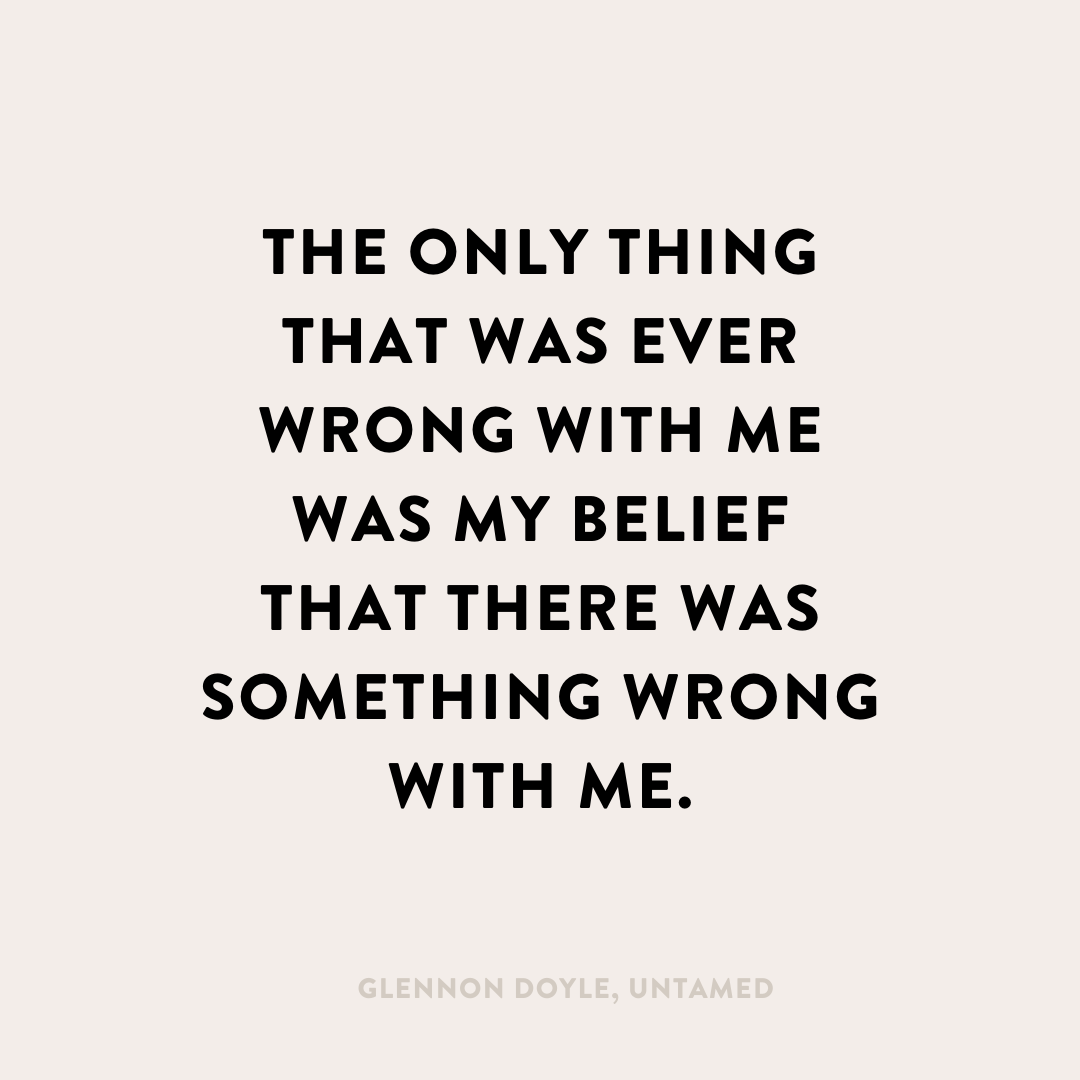 If I could go back in time, I would change the Cinderella song lyrics, “a dream is a wish your heart makes,” to instead be, “dreams are freaking orders.” 5-year-olds all over the world would at least learn something a little more concrete and useful (Glennon and Disney, can we get a collab?). We often use the word “dream” to describe the loftiest imaginations that are far from reality or some distant fantasy that would be nice if it came to fruition (*shoulder shrug*). But Glennon has a different idea of dreams. She tells the reader to think of their truest, most beautiful life. That vision is not a pipe dream; it’s a blueprint for how you can (and should) live your life. Now if someone could just let Zac Efron know that he’s in my life’s blueprint, that would be great.

4. Confidence means loyalty to the self

I’ve written, thought, and talked a lot about confidence in my career as a wellness writer and a health coach. It’s the wellness buzzword that everyone’s seeking but most are missing. I hear all too often, “If I could lose weight, I would finally feel confident” or “I want to get a promotion so I can feel more confident,” as if confidence is a medal we win after achieving a specific circumstance. But after talking to so many women about how to feel confident and also working on confidence myself, I’ve learned that it is really just about trusting yourself.

Glennon put this into words, explaining that confidence is not a circumstance or a set of traits like ambitious, demanding, or outgoing. Instead, confidence just means you are loyal to yourself. Your actions are true to who you are and you live from the inside out. In other words, you say “no” when you mean no and say “hell yes” whenever you really want to. Now that’s a feeling that no pant size or title change could ever give you. 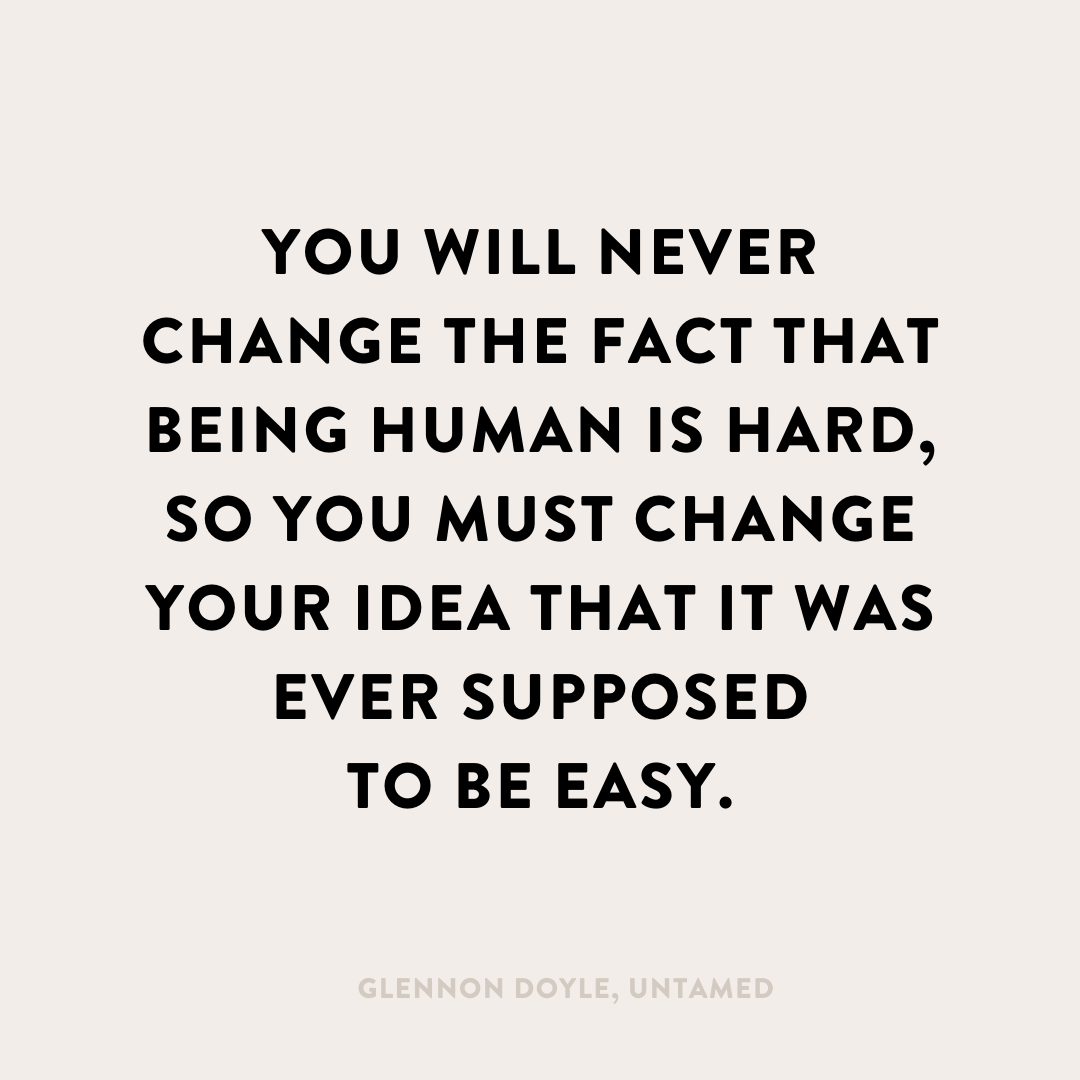 5. All feelings are for feeling

I’m realizing that this is quickly becoming a personal diary, and I already feel like I’ve gone through three therapy sessions just writing this (the magic of Glennon Doyle), but I think many people can relate to her when she talks about going through difficult times. Maybe you didn’t have similar life experiences, but we have all felt hard things. As someone who has had a lot of anxiety, I avoid negative feelings at all costs. I avoid sad conversations, try not to endlessly worry about something happening to the people I love, refuse to watch a horror movie because it makes me think about death too much (morbid, I know), and have used TV as a distraction to get out of my mind since I was 12 years old. When Glennon wrote about someone telling her that it’s OK to feel and that negative feelings are a part of being human, I felt like they were talking to me. It was like a wakeup call, or rather, a message from the universe saying, “Don’t be so dramatic, Josie!”

It’s true: Feelings are for feeling–all of them. We’re accustomed to think that we’re only supposed to feel happy. Any other emotion is wrong, so when we feel pain, stress, sadness, etc., we believe it’s for fixing or deflecting. But here’s the reminder I needed: Every feeling is meant to be felt—yes, even the hard ones. It’s OK to not be OK, and it’s also an important, beautiful part about being human. Pain helps us to become more of what we’re meant to be. I think that when we feel the bad, we can feel the good parts even more. So that’s what it’s like to be human, huh? 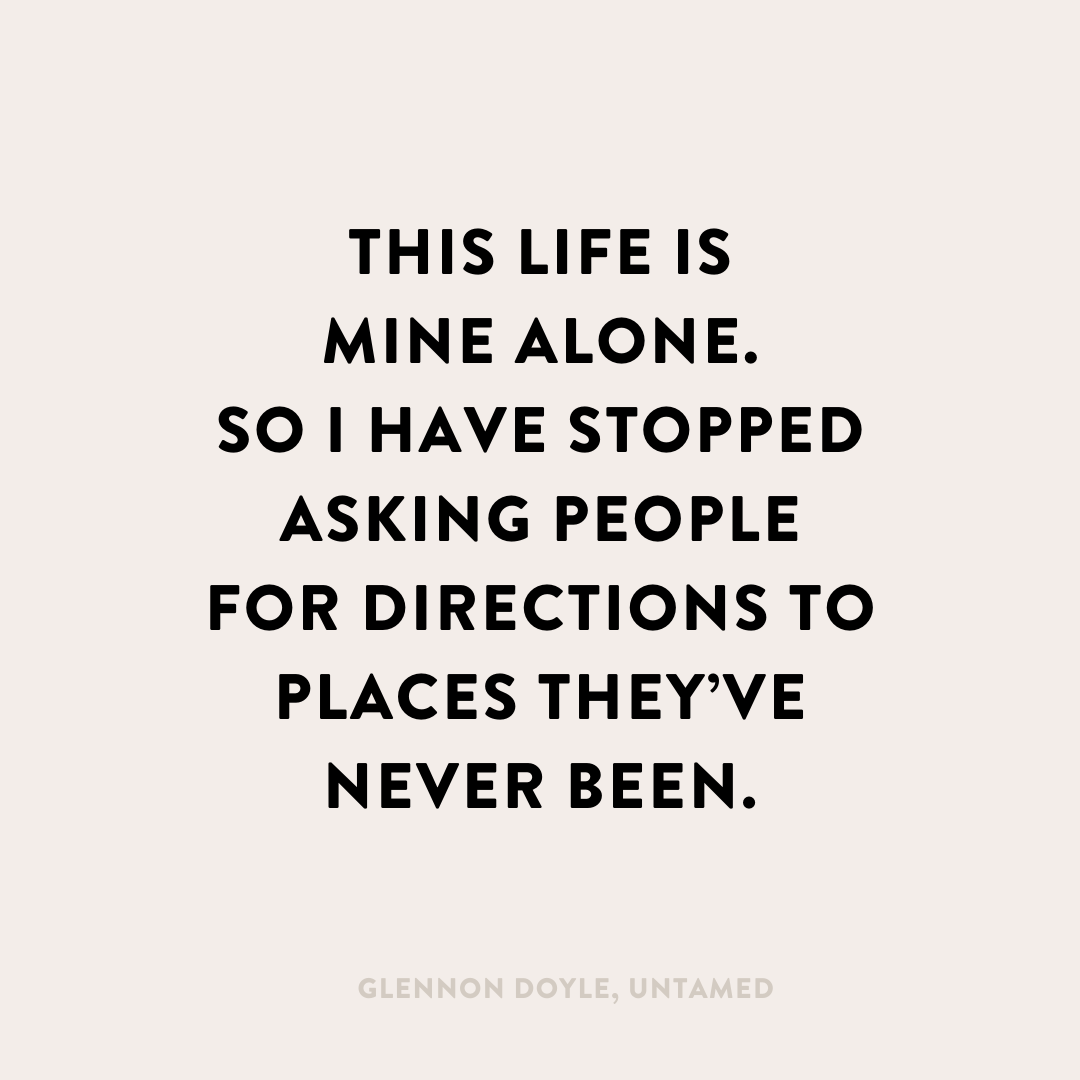 I’m a hopeless romantic, so I’ve read just about every classic love story and watched every rom-com available on a streaming service or at Blockbuster in 2005. One of my very favorite explanations of love, beyond The Notebook, The Titanic, or even Pride and Prejudice, was when Glennon Doyle explained meeting and falling in love with her wife, former U.S. women’s soccer team star Abby Wambach. She describes hugging her to be like electrical currents and even named the chapter of Abby’s proposal “Sparks.” The terminology of having a “spark” is so interesting because we’ve romanticized it for so long. We’ve used it to explain love at first sight and talk about keeping it alive in LTRs.

But I think Glennon uses it in a very different way. It’s not chemistry or destiny between two people, it’s what makes us feel alive. After all, her point is not just about how beautiful and sob-worthy her love is for Abby (even though it really is), the point is that she made choices that made her feel alive. Glennon’s mother tells her soon-to-be fiancé that she hadn’t seen Glennon “this alive” since she was 10 years old. Maybe the spark is not something we need to try to keep alive in relationships; maybe the spark is a sign that we are alive. We can apply this to romantic relationships, but it can also be applied to friendships, careers, and environments. “The spark” is not what The Notebook would have us believe, it’s simply a sign that we’re making decisions based on what we want, not what we’re supposed to want. So go chase those sparks.

And finally, for the lesson that has most tangibly changed my life and the sentence that still makes me cry every time I read it: “Your job, throughout your entire life, is to disappoint as many people as it takes to avoid disappointing yourself.” As a chronic people pleaser, I have lived the majority of my life avoiding other people’s disappointment. I’ve lived in fear of letting other people down (including people who I know love me unconditionally), I care too much about opinions I shouldn’t give a second thought about, and I have always seen “my best self” from the lens of how likable I am.

So all you other people pleasers out there can probably agree that this sentence strikes a chord. With all the pleasing we do on a regular basis–impressing our bosses, hoping dates like us, making our families proud–it’s funny how rarely we stop to think about whether or not we’re pleasing ourselves. My new motto? Abandon everyone else’s expectations of you before you abandon yourself. It’s easier said than done, but at least I’m trying: I have a little Post-It note on my desk with a Glennon Doyle quote to remind me to stop being so damn tame.

We strive so mightily to be good: good partners, daughters, mothers, employees, and friends. We hope all this striving will make us feel alive. Instead, it leaves us feeling weary, stuck, overwhelmed, and underwhelmed. We look at our lives and wonder: Wasn’t it all supposed to be more beautiful than this? We quickly silence that question, telling ourselves to be grateful, hiding our discontent—even from ourselves.
Shop now 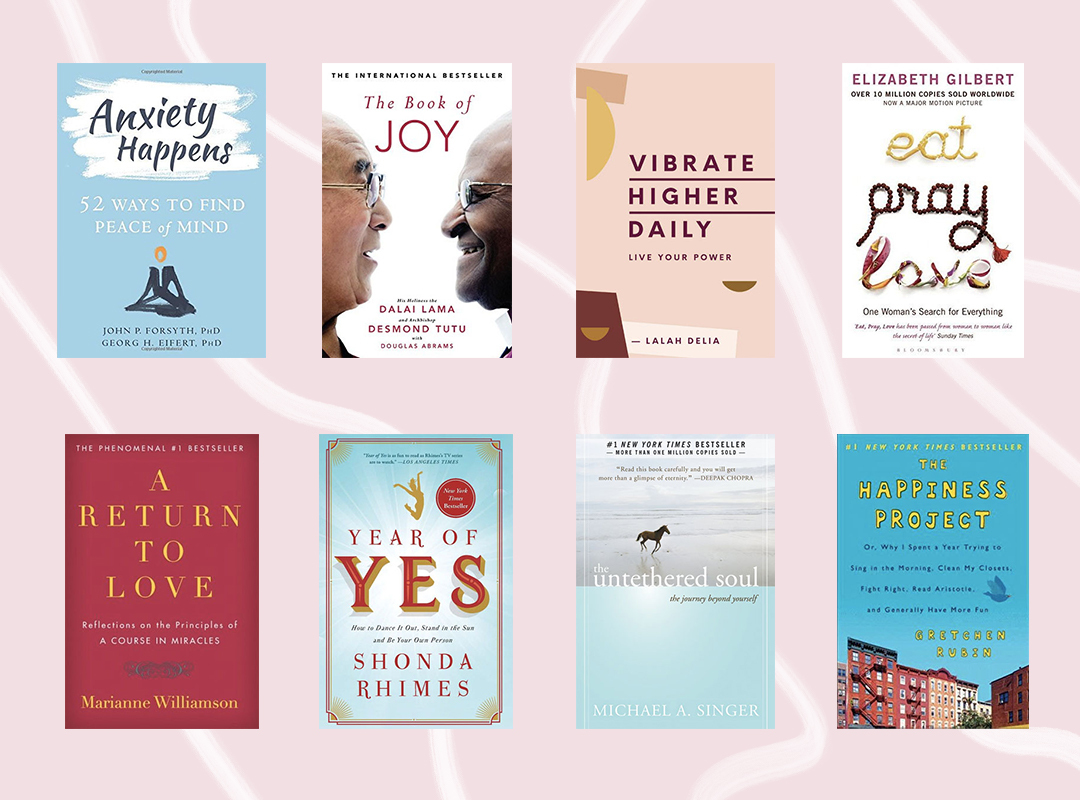