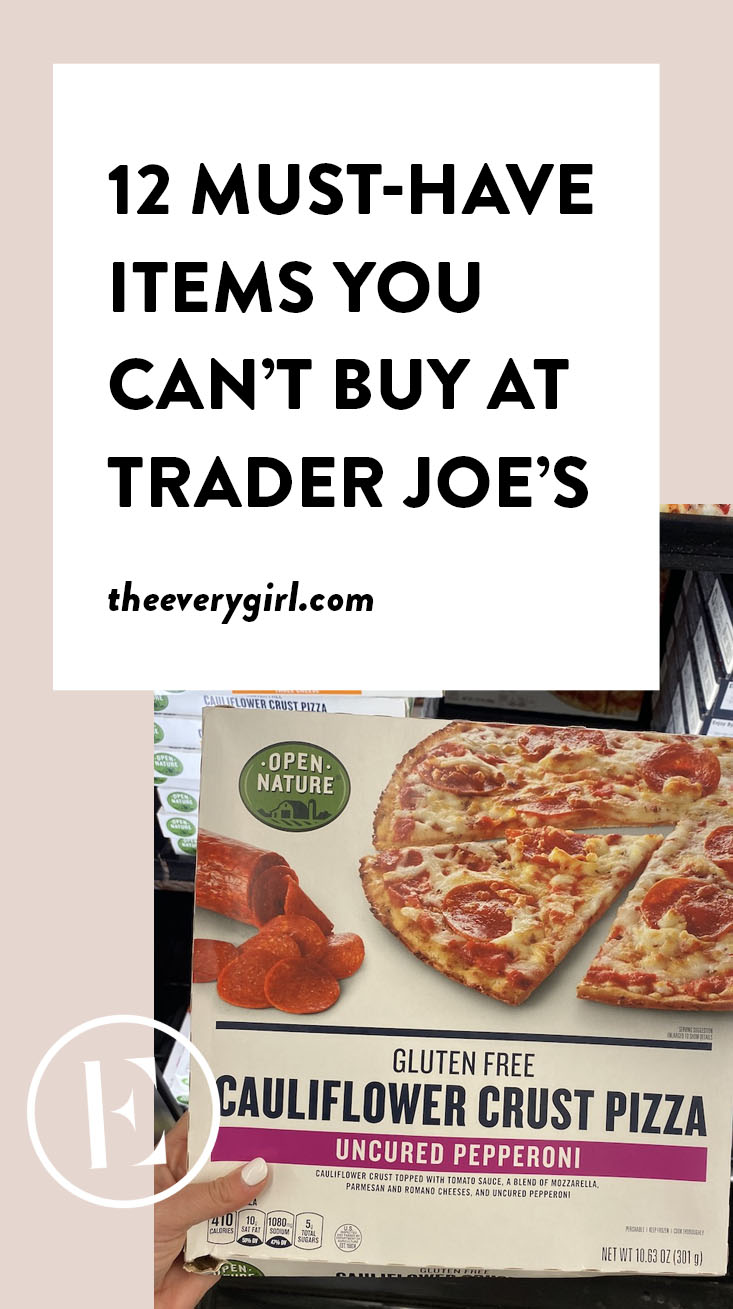 While I was in college, the three main food groups that dominated my diet included pizza rolls, ranch, and coffee. I know what you’re thinking. She was a beacon of health and wellness. I probably cooked a real meal only once (buttered noodles count, right?) and I don’t think that I consumed anything green for an entire year.

It was during this “less than nutritious” time of my existence that I was introduced to Trader Joe’s and, at first, I didn’t get the hype. Sure the prices were to die for and the cheeky packaging caught my eye but something was missing. I couldn’t find my beloved Totino’s pizza rolls. At the time, cheating on a Totino’s by opting for an off-brand pizza roll was an actual sin. So no, I wouldn’t call my affair with TJ’s a “love at first sight” situation.

When I was ready to face the fact that I couldn’t live solely off of pizza rolls, my relationship with Trader Joe’s grew stronger. We flirted, we dated, and now, we’re in a full-blown committed relationship. But, as with all relationships, I’ll acknowledge that our partnership is far from perfect. In an ideal world, Trader Joe’s would be a one-stop shop for all of the groceries I could ever possibly need. But the reality is that if I want, say, pizza rolls, I have to make a second trip somewhere else.

I’m a self-proclaimed Trader Joe’s groupie but here are 11 items I have to shop elsewhere for: 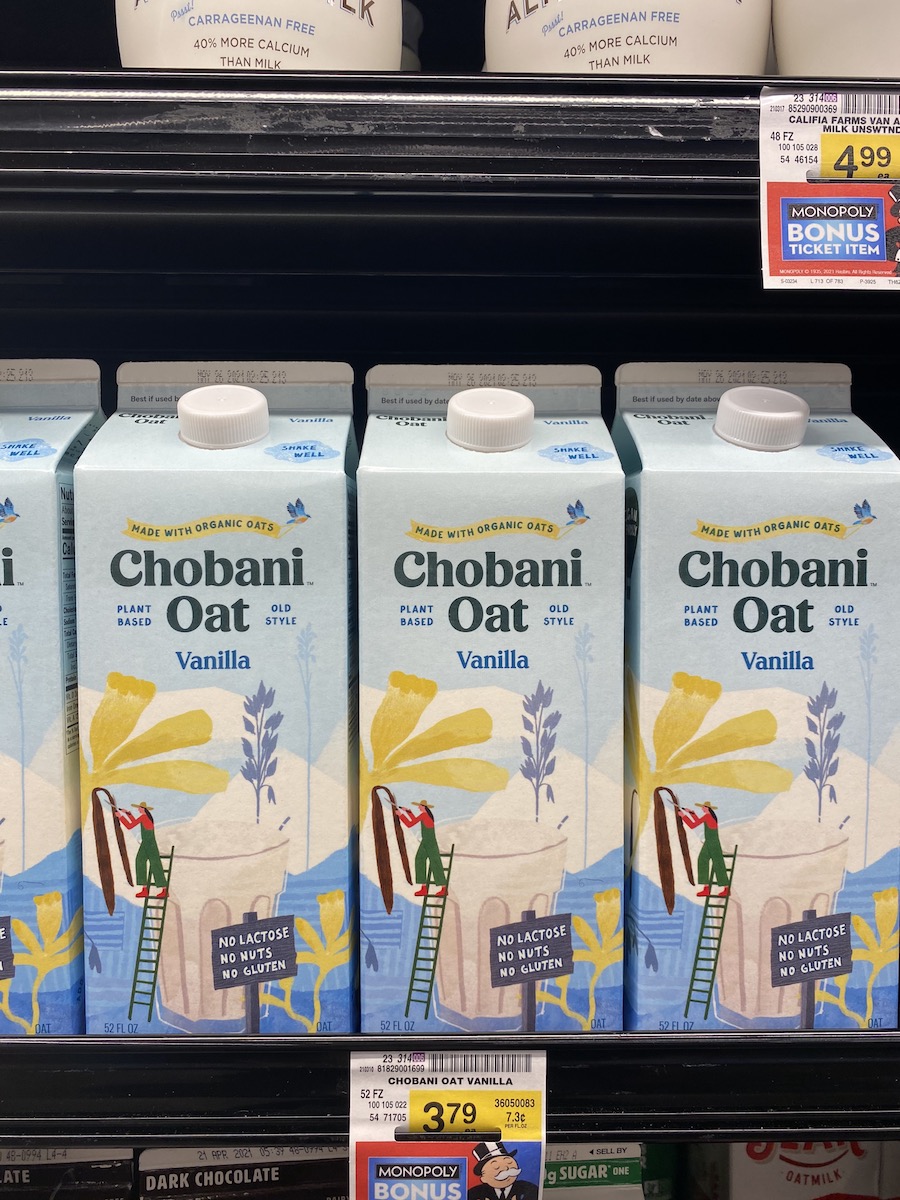 Trader Joe’s came so close to fulfilling my need for flavored oat milk in the fall when they released their maple-infused oat milk and, I’ll tell you, it was absolutely divine. But unfortunately, their Maple Oat Milk is a seasonal item that you can only snag when PSLs roam freely and the leaves boast a warm, rust-red color. Now, all that remains in its place is unflavored oat milk which does a job but not the job that I need it to do. I use this Chobani Vanilla Oat Milk every morning to make vanilla lattes and, until TJ’s brings back some flavored version of their unexciting oat milk, this is my go-to oat milk situation. 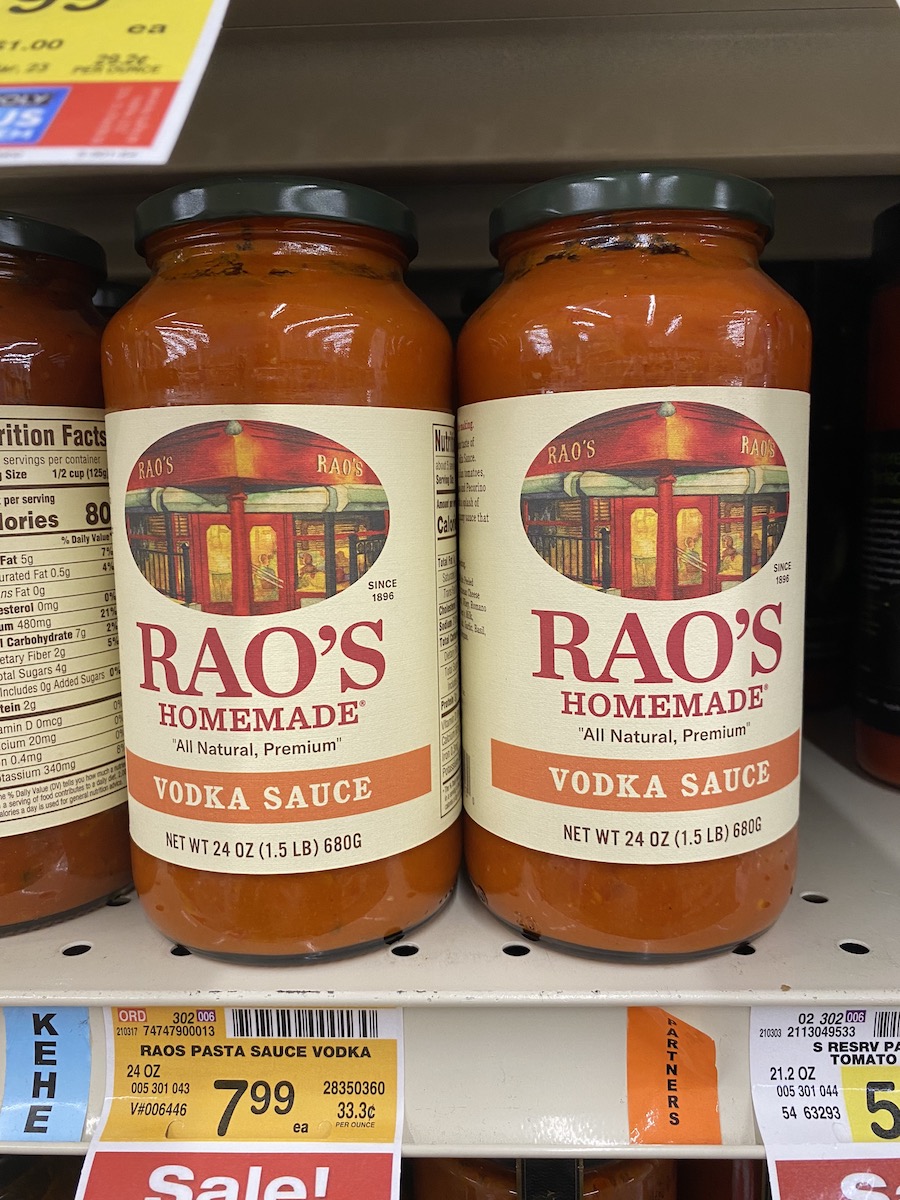 I’ve said it once and I’ll say it again: I would do illegal things for Rao’s. Their all-natural sauces taste so close to my Italian grandmother’s homemade sauce that it’s worth the extra trip on my way home from Trader Joe’s. Don’t come for me, I’m not saying TJ’s sauces are bad. But Rao’s just hits exponentially different. At my local grocery store (s/o Jewel Osco), Rao’s is always on sale, which makes it comparable in price to any of Trader Joe’s sauce options. 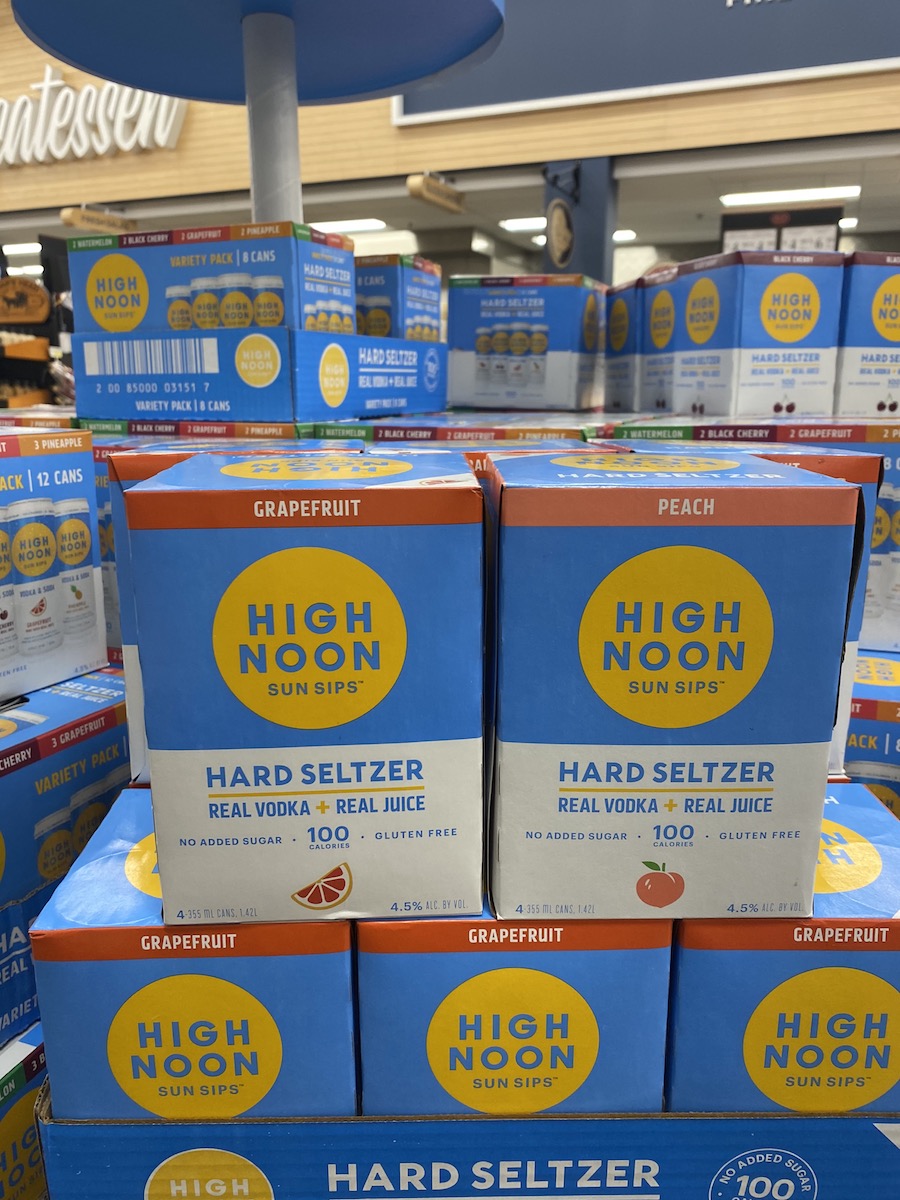 True Life: I’m a High Noon snob. I’ve tried hard seltzer after hard seltzer and, to be frank, most of them are just too flavorless for me. High Noons, on the other hand, are just right. They’re blended with vodka—not malt liquor—which helps to accentuate all of the fruity flavors your heart could desire. As of right now, Trader Joe’s just doesn’t have anything that compares so making a second trip for these (especially in the summer) is so worth it. 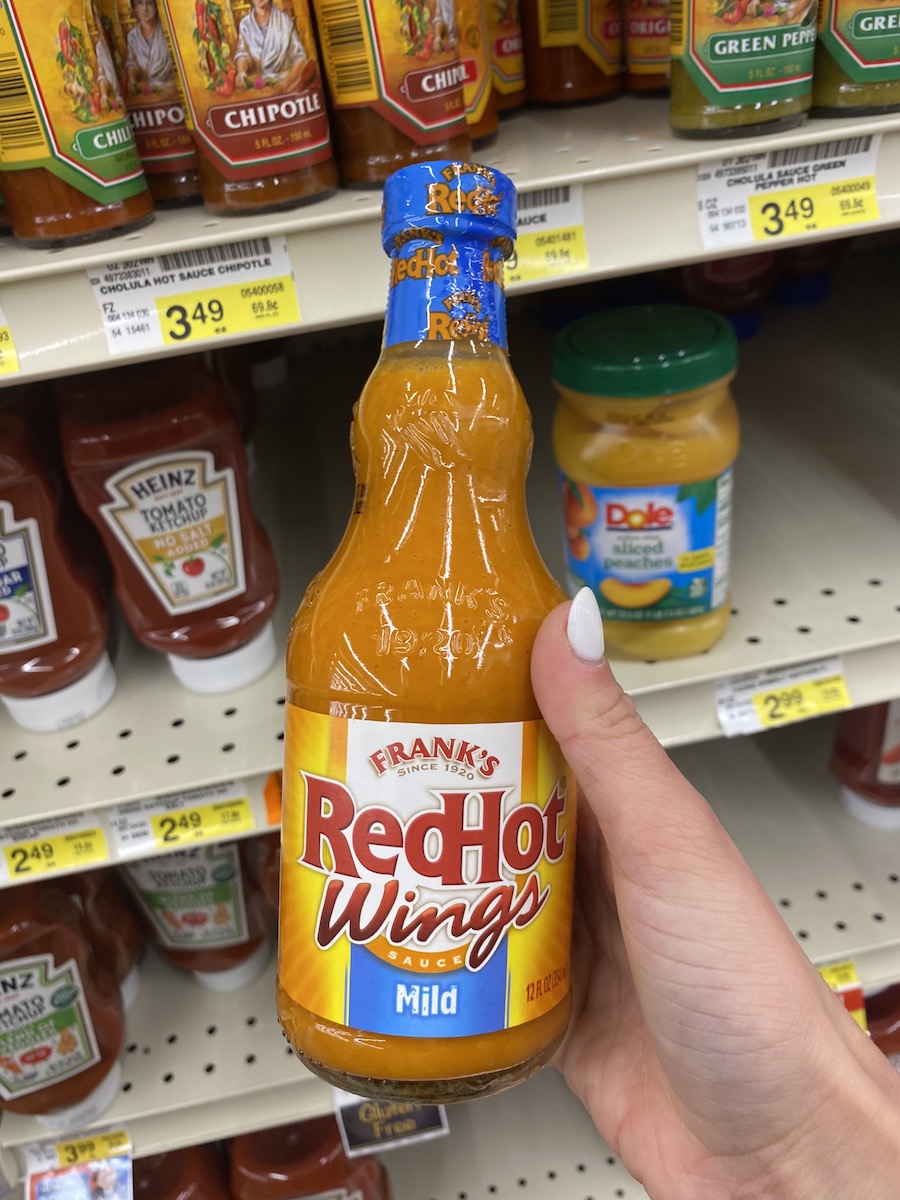 “Why does Trader Joe’s have hot sauce but not buffalo sauce?” is the recurring question that keeps me up in the late hours of the night. I just adore buffalo sauce. I put it on my eggs, avocado toast, buffalo chicken wraps, and salads. I simply can’t live without it. The day that Trader Joe’s releases one of their own is a day that I dream of often. 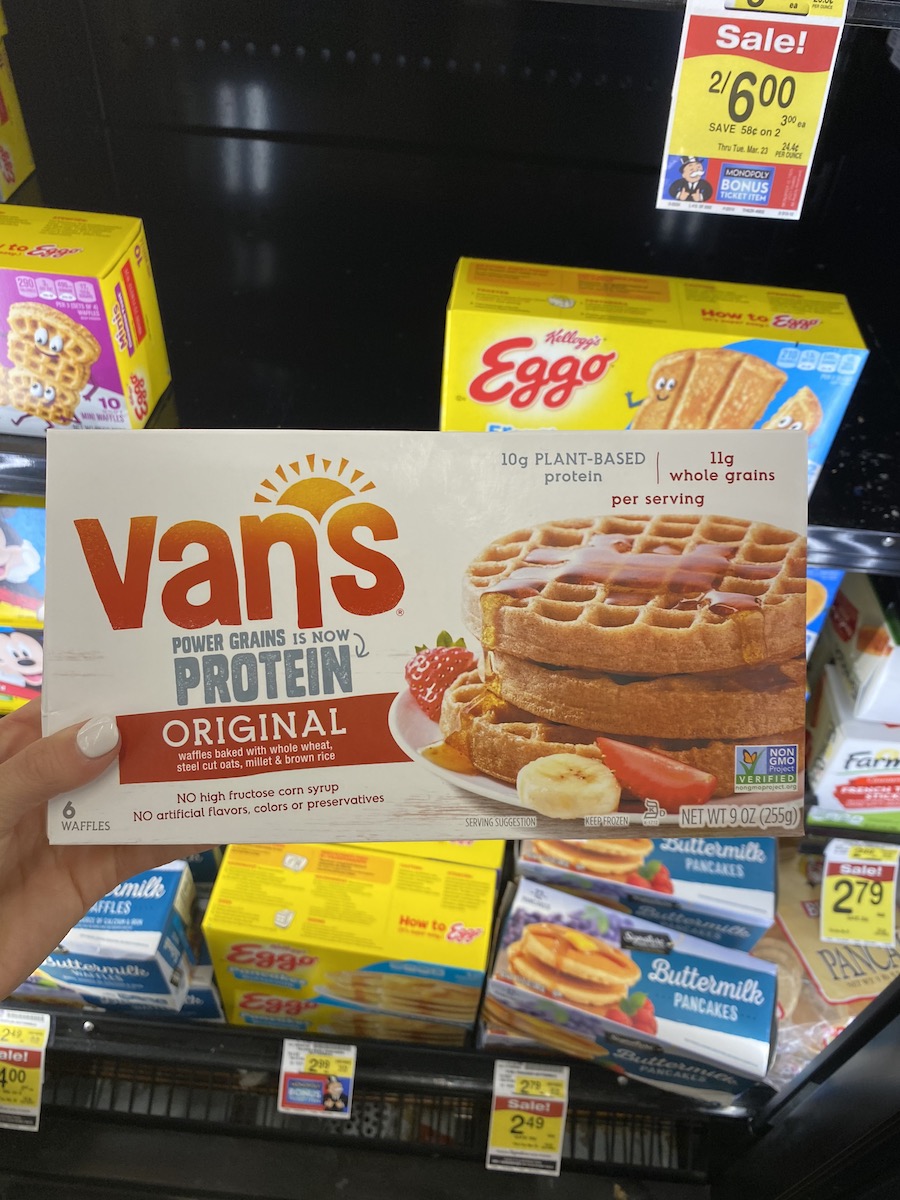 Van’s protein waffles are my favorite waffles in the game for so many reasons. These ones are gluten-free, high in protein, and sans artificial flavors, colors, or preservatives. That makes them an absolute win in my book. Trader Joe’s has waffles in their frozen breakfast section but until they release a higher-protein option, I’ll opt for these bad boys. 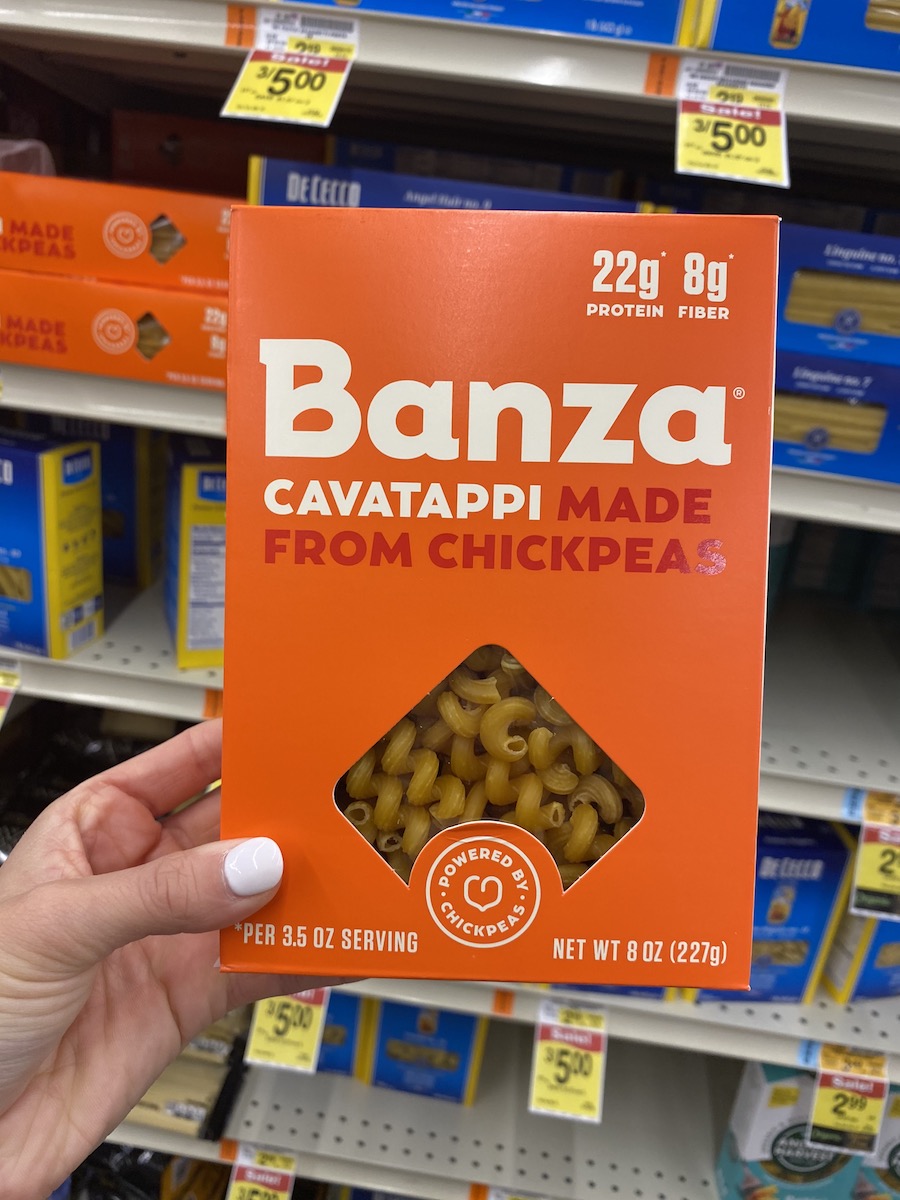 Banza noodles are my love language. I’m always trying to sneak in extra protein wherever I can so when I found out that this chickpea pasta tasted just like traditional pasta, they became a tried and true staple in my pantry. Past me has tried the Trader Joe’s Red Lentil Pasta in search of a pasta alternative that packed in more protein and, while they passed the protein check, the texture was just too suspicious for me to stomach. 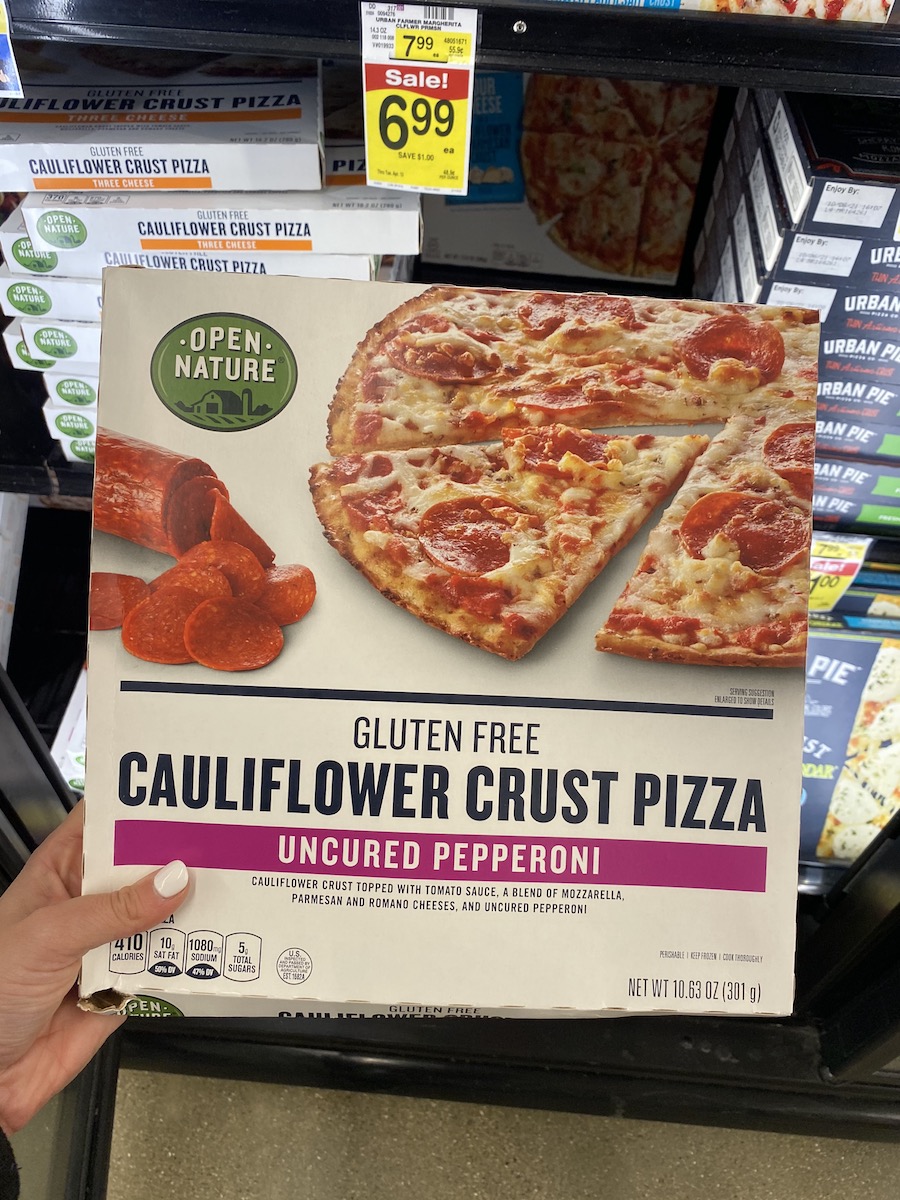 With Trader Joe’s success with cauliflower alternatives (cauliflower gnocchi, riced cauliflower, mashed cauliflower, cauliflower pancakes, etc.) I am shocked that they don’t have a good cauliflower pizza option but, alas, they do not. They do have a cauliflower pizza crust which is great if you want to assemble the pizza yourself but for public record, if I’m getting a frozen pizza, I already want it dolled up. I rave about this Open Nature Cauliflower Pizza to anyone and everyone who will listen. It’s the closest taste I’ve ever experienced to regular pizza sans the guilt and is packed with more protein and fewer carbs. Sign me up, baby. 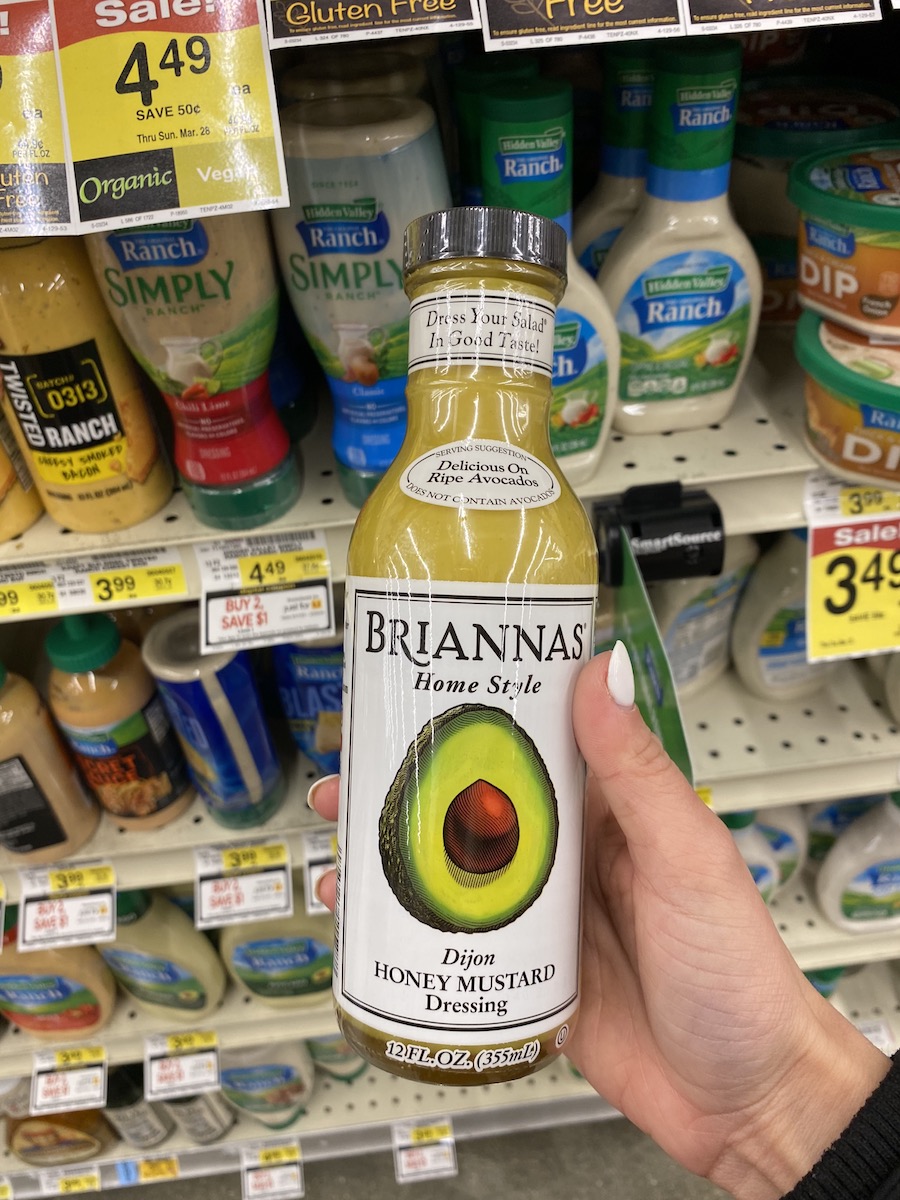 While Trader Joe’s has a decent selection of salad dressings and sauces, traditional grocery stores typically have more. Like this Brianna’s Home Style Dijon Honey Mustard Dressing that I have basically been drinking with a straw this past week, for instance. It’s perfect on salads and avocados and Trader Joe’s has nothing like it. 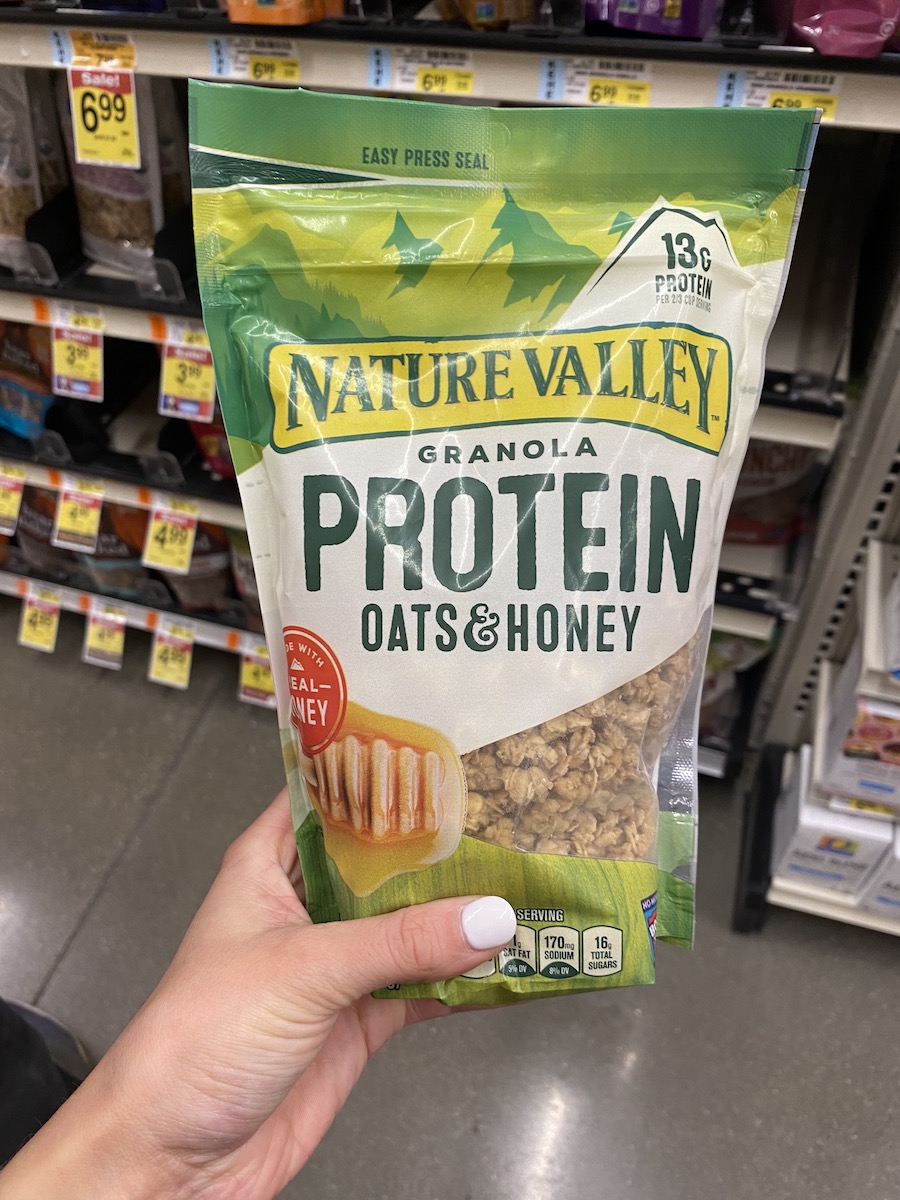 In this house, we stan sneaky protein options—like this Nature Valley Oats & Honey Protein Granola. I’m waiting for Trader Joe’s to come up with something similar but, right now, the only protein granola they carry (that I know of) is peanut butter flavored, which isn’t super versatile. Don’t get me wrong—I love PB. But I definitely have to be in the mood for it. I love eating this Nature Valley granola straight out of the bag, in my greek yogurt with fresh fruit, or on a pita wrap with almond butter, chia seeds, and bananas. And I think I’ll go have some right now. Nom, nom, nom. 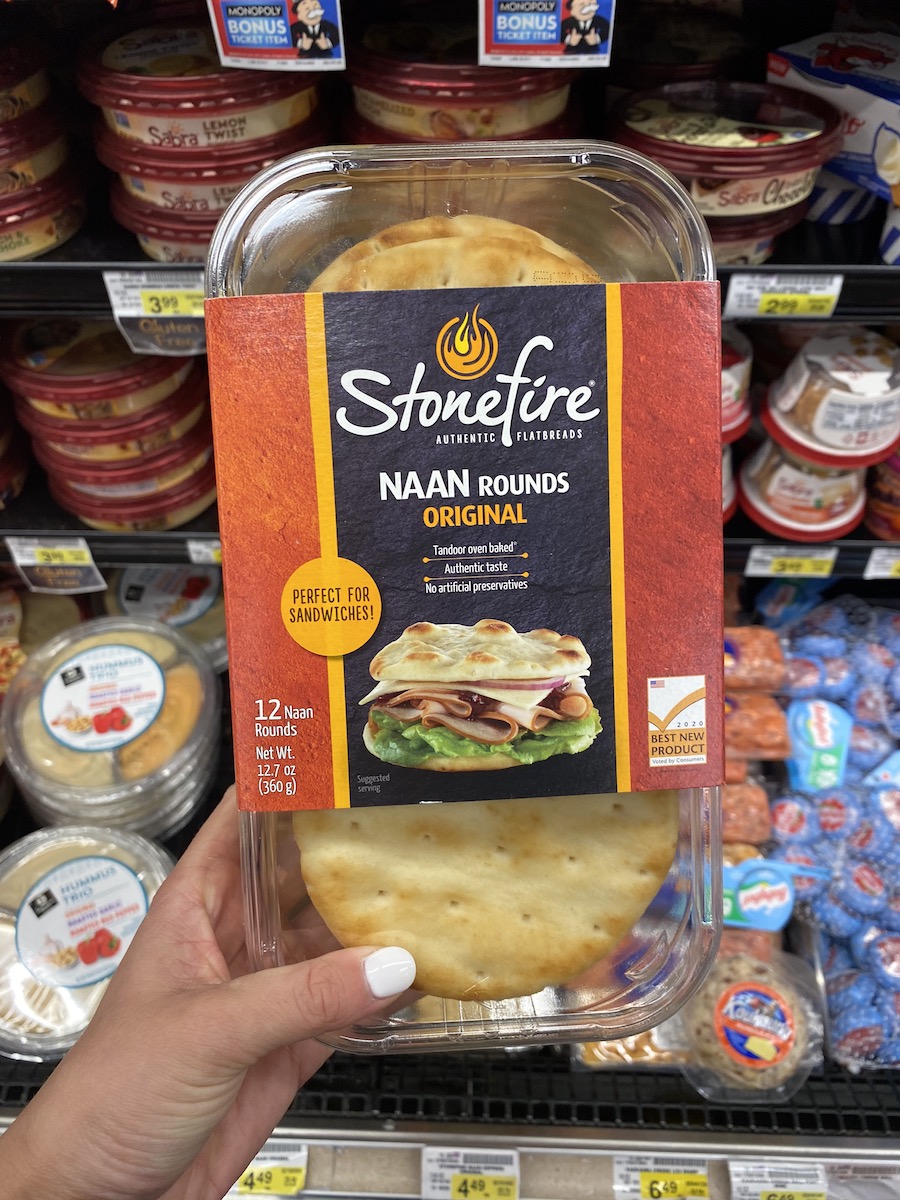 Trader Joe’s carries naan options in their bread aisle and in the frozen foods section but the actual pieces of bread are large and in charge. I prefer my naan to be toaster-size for making sandwiches or even smaller for dipping in hummus. These Stonefire Naan rounds are so good with hummus, balsamic, red pepper flakes, and turkey and I truly can’t get enough of them.

There is something about pre-packaged deli meats that just makes me a little woozy so even though Trader Joe’s carries traditional deli meats, they’re preservative-packed and that is just not my thing. If I’m looking to make fresh sub sandwiches, I head to my local grocery store, bob and weave over to the deli counter, pull my number, and wait my turn—the old-fashioned way.