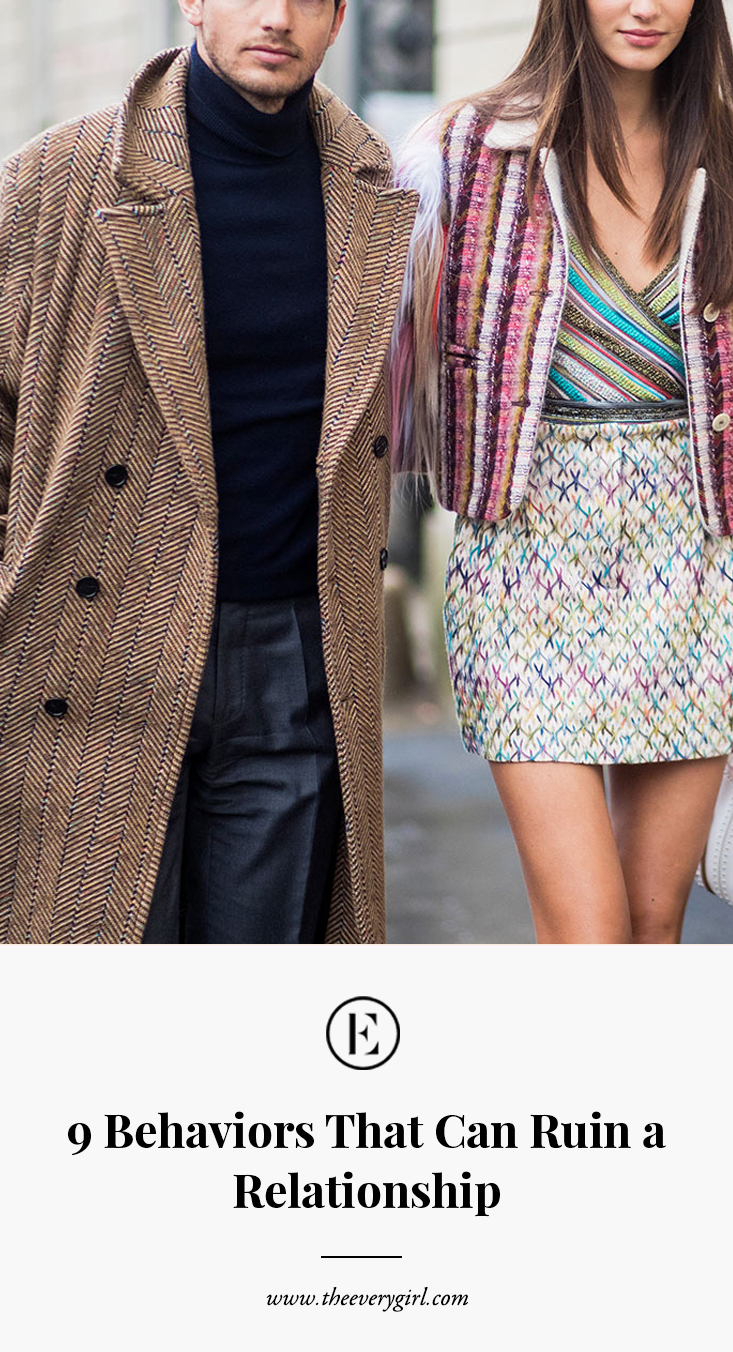 Hey, we’re totally cool being single, independent ladies, but it’s nice to fall in love sometimes, too… right? So why, then, do we so often sabotage good relationships once we’ve finally found them?

Below, find a little cheatsheet to check yourself on behaviors that might be chipping away at your significant other’s continued desire to be your other half. Or, forward this over to him or her so that they can check theirs instead. (Not super subtle, but potentially effective nonetheless!)

If you’re making decisions as a “me” instead of a “we,” you might be in trouble. A common complaint I hear among my coupled friends is that their partners are failing to act as partners at all. Instead, their relationships seem stuck in the early phase of dating, when you see yourselves as two independent people operating with your own best interests in mind rather than taking into account the greater good of the team. Over time, this behavior will keep your partnership stunted and, since most people prefer to grow in relationships, eventually cause a schism.

Sure, long-term partnership can be annoying, and we’re all guilty of nitpicking at our significant others to some degree; however, if you’re constantly criticizing your partner, only one of two things can happen (neither of which is good). The first is that your partner stays with you regardless, resulting in a long-standing scenario that is absolutely toxic. The second possibility is that they get fed up and finally move on.

If you feel like you’re incessantly picking on your partner, it may be time to consider unpacking why you do that, especially if it’s a pattern in your relationships. Or, you might need to break things off so as to find someone whose behaviors are more agreeable to you.

No one wants to “fight” all of the time, but what’s even more unhealthy is letting little grievances build up without airing them. Say, for example, your partner does something that hurts your feelings, but you don’t want to ruin brunch by bringing it up—do it anyway. You may experience a short period of discomfort as a result (expert tip: a bloody Mary might help), but that sure beats an extended period of low-grade resentment. Besides, the way in which you approach the issue can make all the difference. Saying, ‘when you did this, it made me feel like this’ is a lot more productive than lashing out in anger.

Losing Yourself In the Other Person

This behavior is alarming when you notice it in a friend, but it’s can be more difficult to recognize when you’re the one performing a chameleon act. If you start dating someone new, and suddenly you like everything they like and you no longer like the things you liked before you met them, that’s a huge red flag. Whereas once you were a daily jogger, for example, you now think running is boring and prefer to go to the gym. Or, you used to eat meat and now, suddenly, you’re a vegan. You prefer your partner’s friends to yours. And on and on it goes.

To avoid this scenario, check in with yourself, comparing who you were before the relationship to who you are now. Of course, you should change to some degree within a relationship, but not 100%. If your friends have trouble recognizing you in a relationship and are relieved when you become single again because ‘you’re back,’ there’s a problem. Make sure you’re still seeing them and engaging in some of the activities you love best no matter what your partner thinks of them. Some time apart is good, too—isolating yourself into a relationship can make you feel desperate to keep it, which can lead to more relationship-sabotaging behaviors.

READ: 5 Ways Marriage Made Me Independent

Lying is bad, yet sometimes the line between right and wrong can become blurry because in reality, everyone fibs. Still, as a general rule, dishonesty is a relationship killer, and the lies don’t even have to be big (e.g. cheating) to cause catastrophe.

For example, I have a friend whose boyfriend of three years constantly lies about having done little things she’s asked him to do that he has not actually done. The tasks are no big deal—if he’d simply admitted to not doing them, she would be annoyed but not furious. Catching him in these little lies, however, has been off-putting to her, and she’s now questioning her continued involvement with someone who can so casually shun the truth.

No one wants to feel like they’re dating their mom and, on the flip side, no one wants to feel like they’ve become a parent to their partner, either. This dynamic is quite common, however, and it’s a sign of broken communication systems that result in a cycle of nagging. If you ask your partner to take out the trash and they agree to do it and then don’t, and then you, annoyed, ask them again and again to get it done, you’ve entered into an unhealthy loop.

In order to break it, you need  to consider whether or not you really want to continuously force someone to do something they clearly don’t care about. If they aren’t interested in vacuuming, perhaps you can look for a household chore they seem more invested in and consider doing the vacuuming as a tradeoff. Or, tell him or her you’d like to hire a housekeeper, since neither of you seem to want to vacuum.

Obviously, you don’t want to take on every task around the house—or pay to outsource them all, either—but the key here is to look for the tradeoffs you may not be identifying. Perhaps you end up doing the bulk of the housework, for example, but your partner is great at running errands. Perhaps you feed the kids but your partner loves running them around until the point of exhaustion… etc. Whatever the case may be, it’s important to notice nagging behavior and reframe the issue at hand so as to avoid killing your relationship with the dreaded, “Didn’t I ask you to…?”.

This one is tough, and if you struggle with insecurity in relationships you may want to work with a therapist to learn the tools that will help you build more confidence in your position with your partner. After all, nobody (healthy) thinks constant jealousy or need for affirmation is sexy.

READ: What I’ve Learned From My 10 Year Relationship

Respect manifests itself in a lot of ways within relationships. It can mean respecting your partner’s boundaries rather than ignoring them in your quest to get your needs met. For example, if your partner never wants to get married, then you have to respect that rather then continuously push them to be comfortable with a different scenario. This doesn’t mean, however, that you should stay with them if you do want to get married. It just means acknowledging that your feelings on the matter do not outweigh theirs.

Respect can also mean not talking sh*t about your partner every chance you get, or even just airing private issues. Of course, it’s healthy to have some people in your life to whom you can vent your frustrations in confidence; however, you need to be mindful of the content of these conversations. If you don’t respect your partner, your friends won’t respect him or her or your relationship, either. When you go out into the world, in other words, it’s important to act with integrity with respect to your partnership—a.k.a. adopt a “ride or die” mentality—don’t say or do anything you wouldn’t want them to know about.

Every relationship has sexual slumps, but if you’re in an affection slump altogether, you may have problems. Behaviors such as hugging, kissing, tickling, etc. are critical to a relationship’s health. Full-on sex is important, too, but not if it’s feeling forced. Strive instead to cultivate those little moments of intimacy that may (or may not, which is okay, too) lead to sex, aka joining your partner for a scrub in the shower.

Settling Into A Power Dynamic

If there is a clear imbalance of power in your relationship, it’s probably in trouble. You should never be the one who forever kowtows to your partner or vice versa. If one partner is constantly submissive, you may need to rethink the relationship altogether and the unhealthy tendencies it may be reinforcing in one or both of you. After all, such toxic patterns, once established, are hard to break.

This post originally appeared May 8th, 2018 on The Zoe Report.