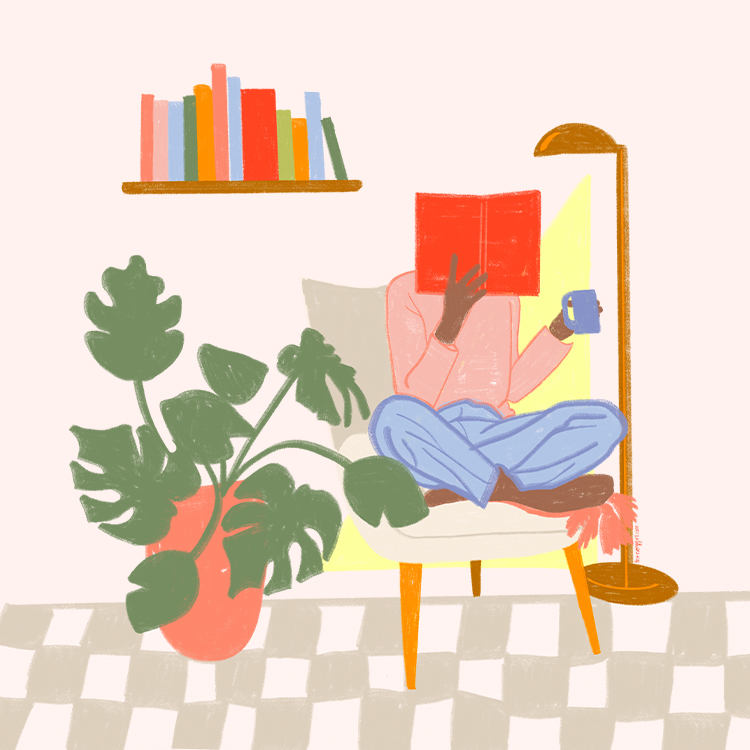 In my humble opinion, as soon as the clock strikes midnight on September 1, it’s officially fall. Is it still blazing hot out? Yes. Does fall not technically start until September 22? Yes. But, as someone who waits all year long for fall to roll back around, I could never let mere technicalities delay me from enjoying my favorite season. It’s the season of changing leaves, crisp weather, Halloween, and diving headfirst into cozy books from the comfort of my reading nook. Can you blame me for wanting to kick things off a little early?

While fall is the spookiest season of them all—and the perfect time to indulge in everything that goes bump in the night—sometimes a thriller book or horror movie simply isn’t what we’re looking for. These cozy books will give you all of the fall vibes you know and love—and even a hint of spookiness, minus the nightmares. Heat a cup of your favorite tea, find the comfiest spot in your home, and get lost in one of these cozy low-stakes stories that will give you your fall fix and leave you able to sleep at night. 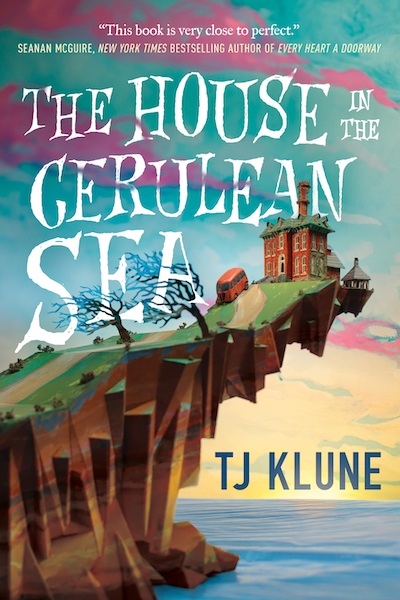 The House in the Cerulean Sea

Linus Baker finds comfort in his mundane, routine life. He works at the Department in Charge Of Magical Youth, overseeing the care of children in government-run orphanages. He goes about his life without much incident, until one day he’s summoned by Extremely Upper Management with an assignment far more exciting and dangerous than any he’s been given before. He’s to travel to Marsyas Island Orphanage to see if the six children residing there, one of whom is the literal Antichrist, will actually bring about the end of the world. Linus accepts the assignment, thinking of it as any other job and not realizing just how special the Marsyas Island Orphanage and its residents are. 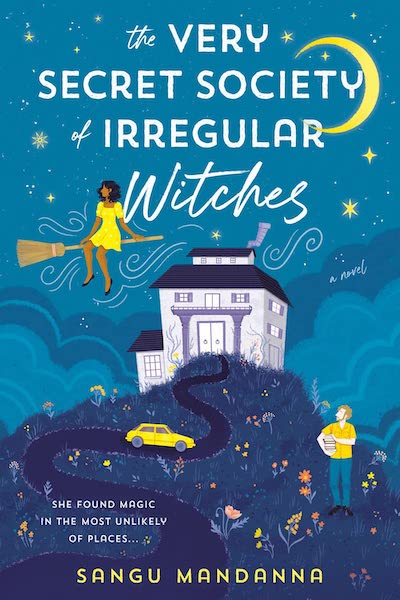 Mika Moon is one of the few remaining witches in Britain. In order to keep her identity a secret, she keeps her head down and stays away from other witches so as not to draw attention. She does a pretty good job of this, save for the silly little online account she uses to post videos of herself pretending to be a witch. It’s a harmless joke, right? Wrong. Mika receives a mysterious message asking her to come to the Nowhere House to take over the teaching of three young witches. Despite this being a bad idea and going against the rules she (mostly) followed, Mika decides to go. Once there, Mika begins to view her new charges and the other residents of Nowhere House as a family of sorts, save for the librarian, Jamie, who can’t find it in himself to trust the newcomer. 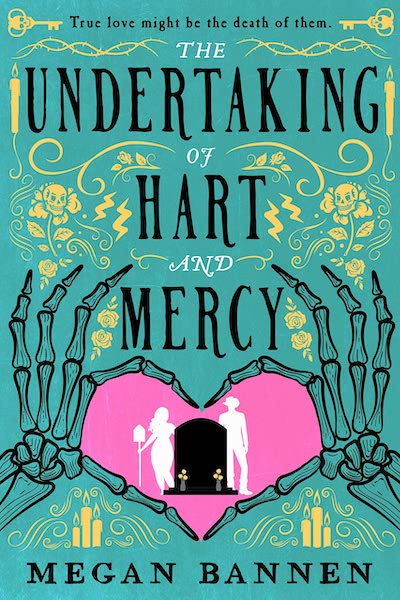 The Undertaking of Hart and Mercy

As an undertaker, there isn’t anyone in Tanria who gets under Mercy’s skin quite like the marshal Hart. The two have exasperating run-in after exasperating run-in, and after one such incident, Hart finds himself writing a letter to no one in particular. When he gets a surprise response, he finds he has a new pen pal and a friendship is born. Unfortunately, the person Hart has been sharing his deepest darkest secrets to is none other than the person he loathes most in the world: Mercy. What will happen to their budding romance when their identities are finally revealed? 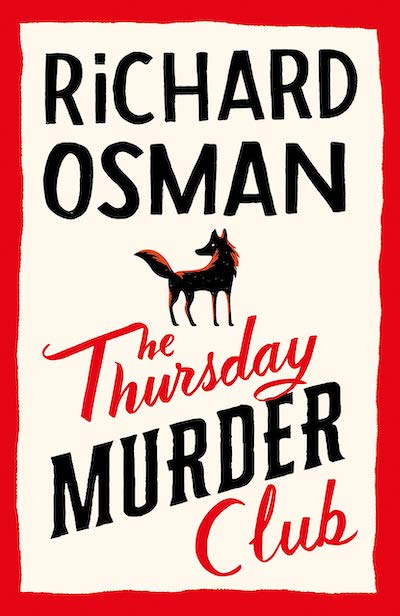 Every Thursday, four residents of a quaint retirement village meet to discuss unsolved crimes. When a local developer is found dead with a mysterious photograph next to their body, the Thursday Murder Club finds themselves in the midst of a real, live case. Can they catch the killer before it’s too late? 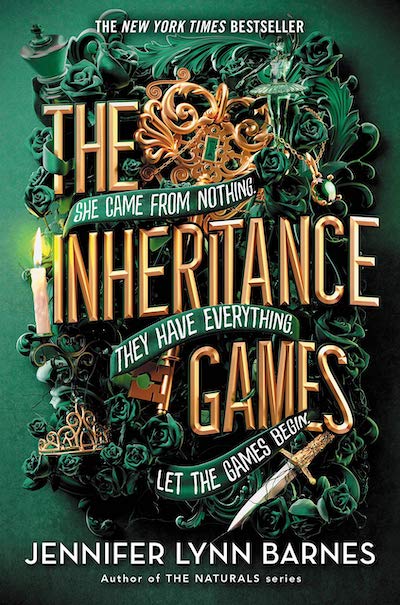 Is there a movie that screams fall better than Knives Out? If so, I don’t know about it. Described as perfect for fans of the movie that gave us sweater-wearing Chris Evans, The Inheritance Games follows Avery Grambs, who, for reasons unknown to her, inherits the entire fortune of one Tobias Hawthorne. In order to claim this inheritance, she must move into his old home, Hawthorne House, with the family he just disinherited. Among them, the Hawthorne grandsons, who believed they were about to inherit billions. So why did the fortune go to Avery instead? 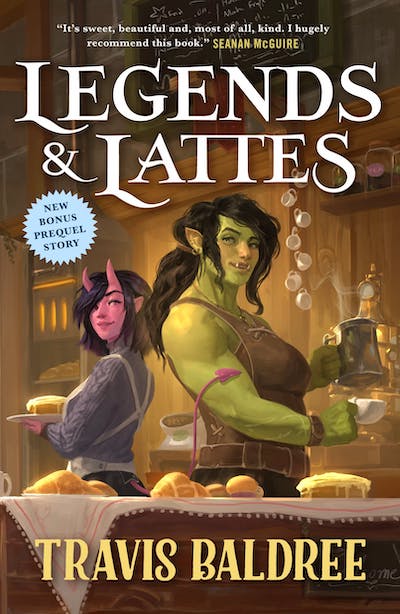 It’s high fantasy and low stakes. What more could you ask for a rainy weekend holed up inside? After a lifetime of bounties and bloodshed, Viv is hanging up her sword for the last time and open up the first ever coffee shop in Thune. There’s just two problems: her old rivals will do anything to keep her from success and no one in Thune actually knows what coffee is. 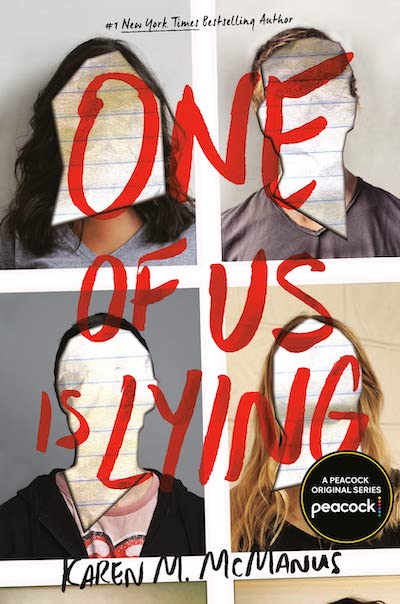 One Of Us Is Lying

On one Monday afternoon, five students at Bayview High go into detention. One of them never makes it out. The catch? The student who died, Simon, runs the school’s infamous gossip app and he was planning on releasing juicy gossip about his detention-mates the very next day. Now, the four of them are suspects in his murder. But did any of them actually do it? Or is there an unsuspected killer on the loose? 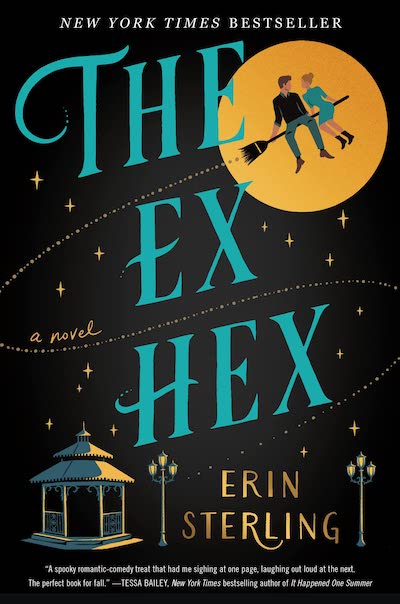 Nine years ago, Rhys Penhallow broke Vivenne’s heart, leaving her to cope like any witch would: vodka, sad music, bubble baths, and a drunken curse on her ex boyfriend. Of course, witches aren’t supposed to use their magic to hex their terrible boyfriends, but it was just a joke between friends, not a real spell. What harm could it do? As it turns out, quite a bit. When Rhys returns to Graves Glen for what should be a quick trip, everything goes horribly wrong. Rhys can’t seem to shake his bad luck, leaving Vivienne with the realization that her harmless little hex might have actually done real damage. 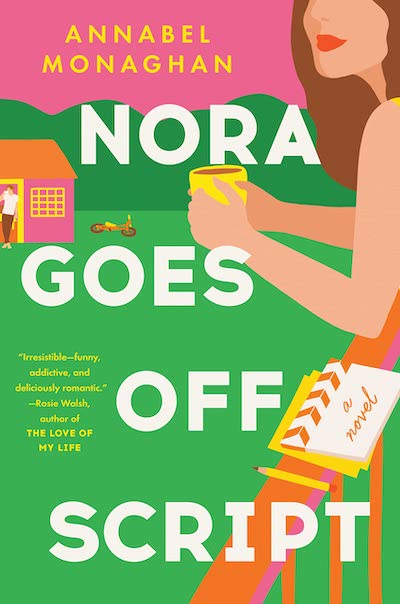 When romance screenwriter Nora’s husband leaves her and their two children, the heartbreak turns into the best script of Nora’s life. When the script is picked up for the big screen and filming begins on location at her own home, she meets actor Leo Vance (former Sexiest Man Alive, thank you very much) and her life is turned upside down. When shooting wraps and everyone finally leaves Nora’s house, Leo approaches Nora with a request: $7,000 to stay an extra week. Nora agrees, and soon discovers that seven days is enough time to fall in love. 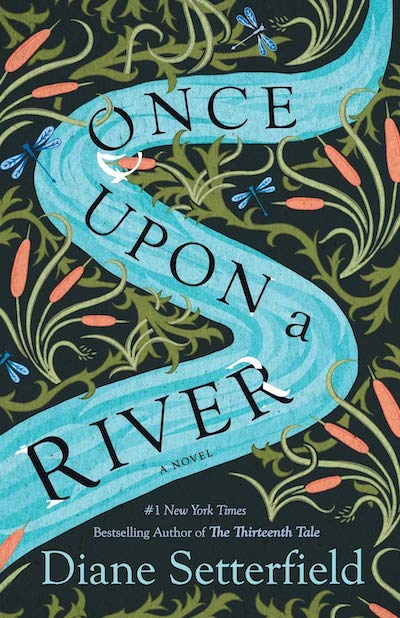 Once Upon a River

On a dark night in an ancient inn on the river Thames, a miracle takes place. The inn’s regulars are whiling away the hours with stories when the door bursts open revealing a wounded stranger carrying the lifeless body of a small child. Hours later, the girl returns to life. Is it a miracle? Magic? Or is there some scientific explanation? Despite everyone putting their heads together to solve the mystery, they’re no closer to an answer when three families come forward to claim her, each with secrets of their own. Before the girl’s identity can be revealed and she can be returned home, all of these mysteries and secrets must be solved and brought to light. 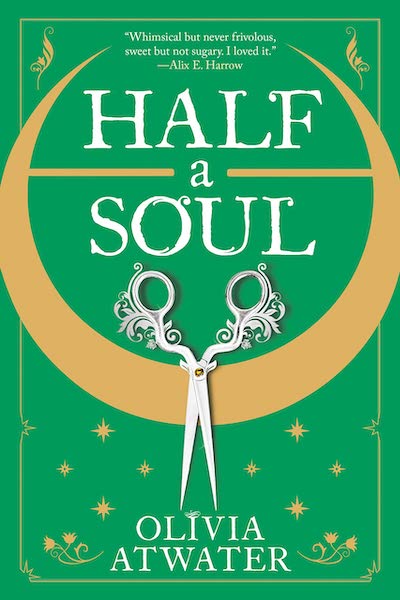 It’s difficult enough to find a husband in Regency England, but to make matters worse, Theodora Ettings has been cursed by a faerie, making her immune to feeling fear or embarrassment. Sounds like a pretty mild curse, but it’s landed Dora in scandal after scandal. When she catches the eye of Elisas Wilder, the most hated man in high society, during the London Season, the odds of her family finding its way back to their old place in the world become much slimmer. But maybe that’s OK if it means Dora discovers she’s able to fall in love with only half a soul. 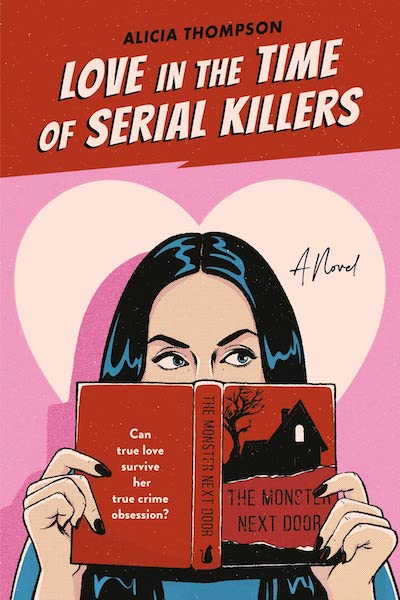 Love in the Time of Serial Killers

PhD candidate Phoebe Walsh is obsessed with true crime—to the point where she’s writing her dissertation on it (that is, if she ever manages to finish it). Between spending the summer in Florida, cleaning out her childhood home, dealing with her obnoxious (yet good-natured) brother, and mourning her father, she doesn’t have much time to focus on her work. To make matters even more complicated, Phoebe is convinced that her new neighbor Sam is a serial killer, but he might be something even worse: a genuinely good guy she could see herself falling for. 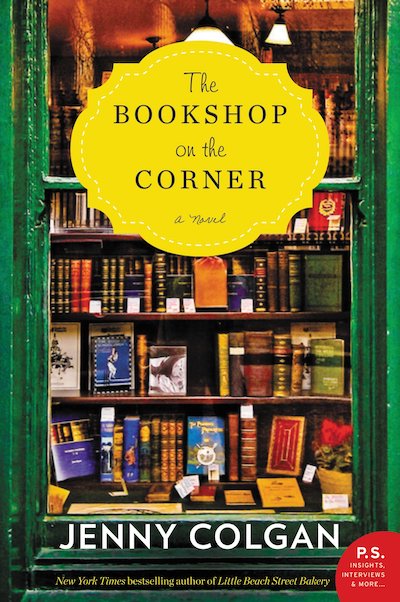 The Bookshop on the Corner

Until yesterday, Nina was a literary matchmaker, pairing readers with their perfect book. When she loses the job she loves, she becomes determined to make a new life for herself. She moves to a small village and transforms an old van into a mobile bookshop, driving from neighborhood to neighborhood to pair readers and books. Throughout her travels, Nina discovers there’s plenty of life to be found in her new town, and it’s even beginning to feel like home. 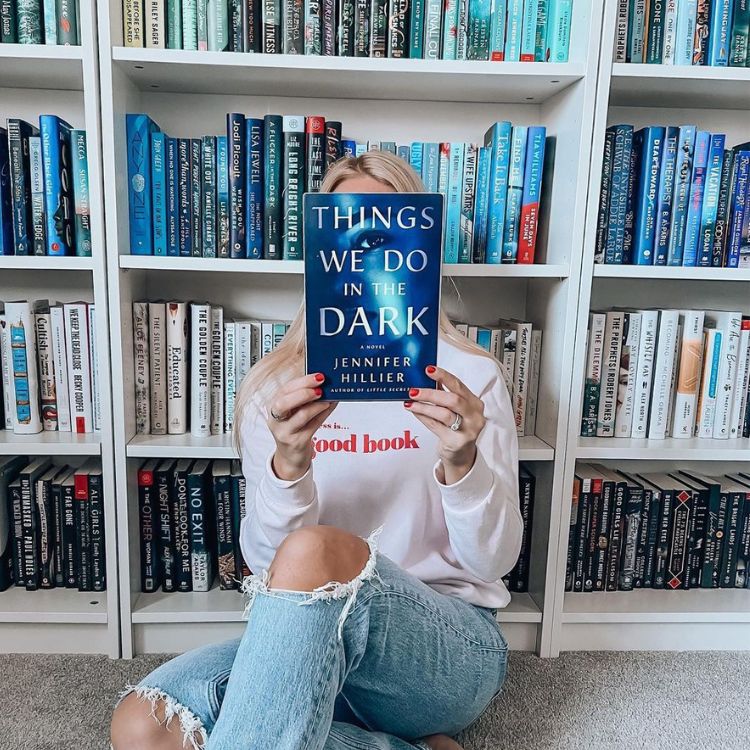