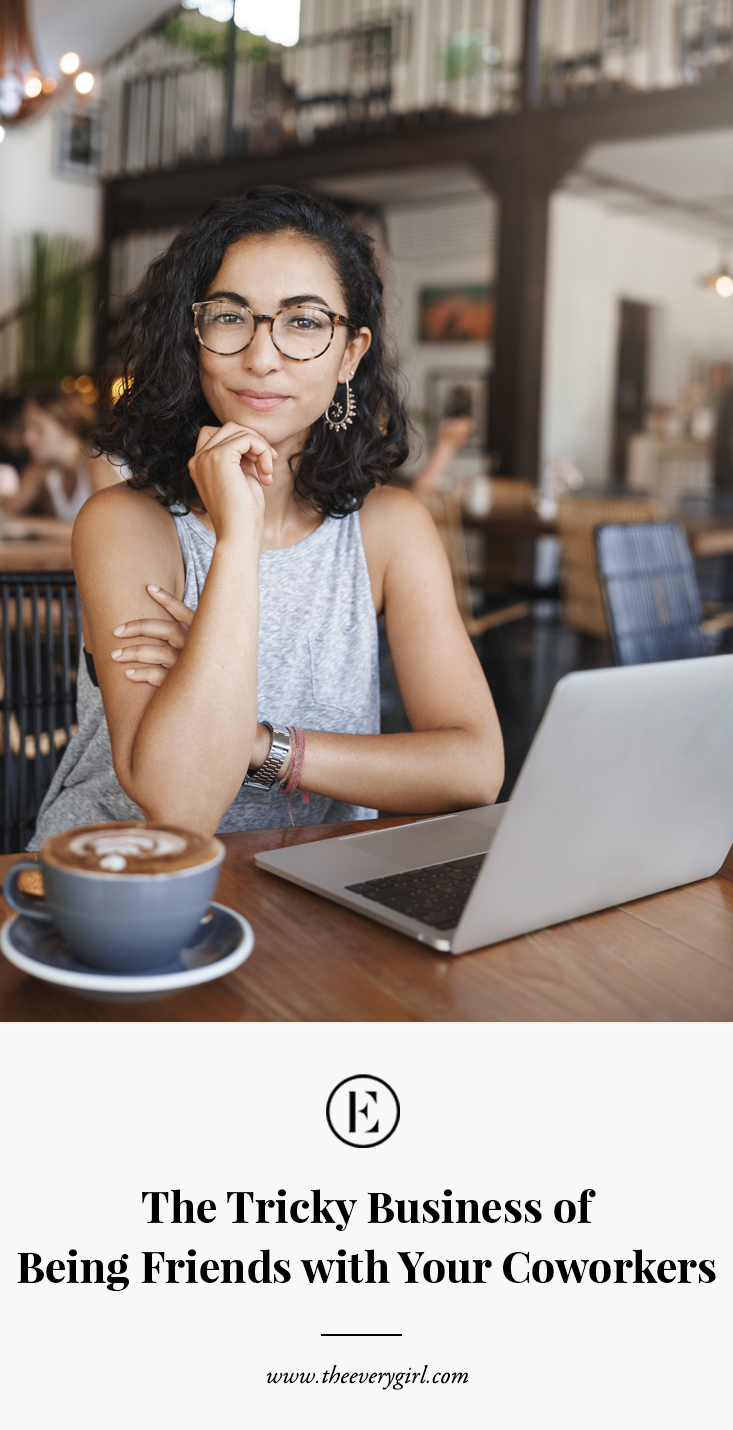 You might have seen the segment on The Everygirl in which our two Editorial Assistants, Maddie and I, try on clothes and talk about how they fit on our two very different body types. In this segment, we often like to say we are both coworkers and best pals. It’s not a joke, and it’s actually even more than that.

Here’s how it started: Maddie and I started interning for The Everygirl at just about the same time. I started a month earlier, but we were trained together and had an idea of who each other were from the start. I’m extremely competitive (enneagram 8!), so I envisioned I’d work really hard at the internship during the day and plot her demise once the clock striked 4pm. But she was nice. We had a lot in common (but not too much in common). A friendship began to bloom.

It’s been a year and a half since baby us texted about intern duties, and Maddie is my best friend. (I rarely say this about anyone.) (She’s reading this. She is our Copy Editor. She is going to make it a thing, and I really hope we don’t have to make it a thing.) (No, this article isn’t a love letter to my friend; I have a point, and I’m about to make it AKA keep reading.)

However, I’ve found it extremely difficult to be best friends with my coworker. I’ve let jealousy, frustration, and annoyance get into our friendship, and I’ve let competition and my own work insecurities hurt our professional relationship at times. And I know I’m not alone. Working with a friend is both incredibly common (you spend so much time together, it makes sense to begin a friendship with them!) and sought after. We’ve done tons of career profiles on women who work with their BFFs, and they all make it work. But how?

Leaving work at work and friendship at home is a lot harder than it sounds, and it isn’t necessarily what I want all the time. It’s fun to be friends at work, but it’s also fun to talk through ideas and collaborate outside the office. So, you have to learn to approach your friendship in two ways: as a friend and as a coworker. Here, we’re running down when you should focus on which, for the sake of your friendship and your career. I haven’t gone through all of these scenarios yet, but I feel confident that I know how to approach them.

When to be a co-worker…

When one of you makes a mistake

This is a part of your working relationship everyone dreads: giving negative feedback. Be honest and come from a place of wanting to help your friend because you work on the same team and you want them to succeed. Don’t put too much emotion into it. You wouldn’t think twice about telling someone you didn’t care about so deeply that they had a typo in a report, and you should take the same reasoning into talking to your friend.

On the other hand, what happens when they have to tell you that you did something wrong? It’s normal to get frustrated and angry when a friend critiques you or calls you out on your sh*t. It feels uncomfortable when that comes from anyone, but from a friend, it feels personal. Remind yourself of the same things above. It’s not personal, and they’re only trying to make you better for the success of the team.

When there’s “drama” at work

When it feels like there’s enough office gossip for everyone to gather ‘round the water cooler for days, you and your work wife probably want to get in on the fun. However, think again. Talking about the drama at work will merely open the floodgates for the two of you to talk about a lot more than you probably want to. Call up your mom and tell it all to her instead.

In work meetings, whether uber-corporate and professional or a casual Friday afternoon brainstorm, it’s important to keep up that professional relationship. Don’t sit next to each other writing love notes while your other coworkers are detailing something you’ll need to know. Instead, come ready with ideas, plenty of pages in your notebook, and a distraction in case you both want to burst out laughing when it is definitely not appropriate.

When to be a friend…

When they’re going through a breakup, loss, etc. at work

We’ve all been there. We just had a breakup, there was a death in the family, your pet is sick, you’re having financial troubles — and you still have to walk into work and act like everything is OK. This is where your friendships come in. While it may seem natural to try to ease their mind by keeping things professional and focusing on your workload, the last thing your friend needs in a tough time is another coworker asking about annual sales. Be there for them in whatever capacity you can. Ask what they need and how they want to be supported at work. Some friends might want you to pretend that nothing’s happening, but you’d be surprised how many might want your support in the office too.

Spend the weekend focusing on your friendship instead of nurturing your work relationship. Use this time to find and discuss the other things you have in common. Do you both love running? Do you have the same taste in movies or music? Leave the spreadsheets and brainstorming sessions for the weekday, and use the weekend to be just friends.

When they move onto other career opportunities

As a coworker, it can feel hurtful when a friend tells you that they want to work somewhere else. It can feel like they’re ungrateful of their position at the time or like the job isn’t good enough for them. But as a friend, you have to understand this isn’t the case. Approach this situation as a friend; understand that everyone has a different idea for their career trajectory, and what might be your dream job right now might seem like a stepping stone for someone else, and that’s OK. Focus on supporting them at the moment and worrying about how you’ll survive without your work wife later.