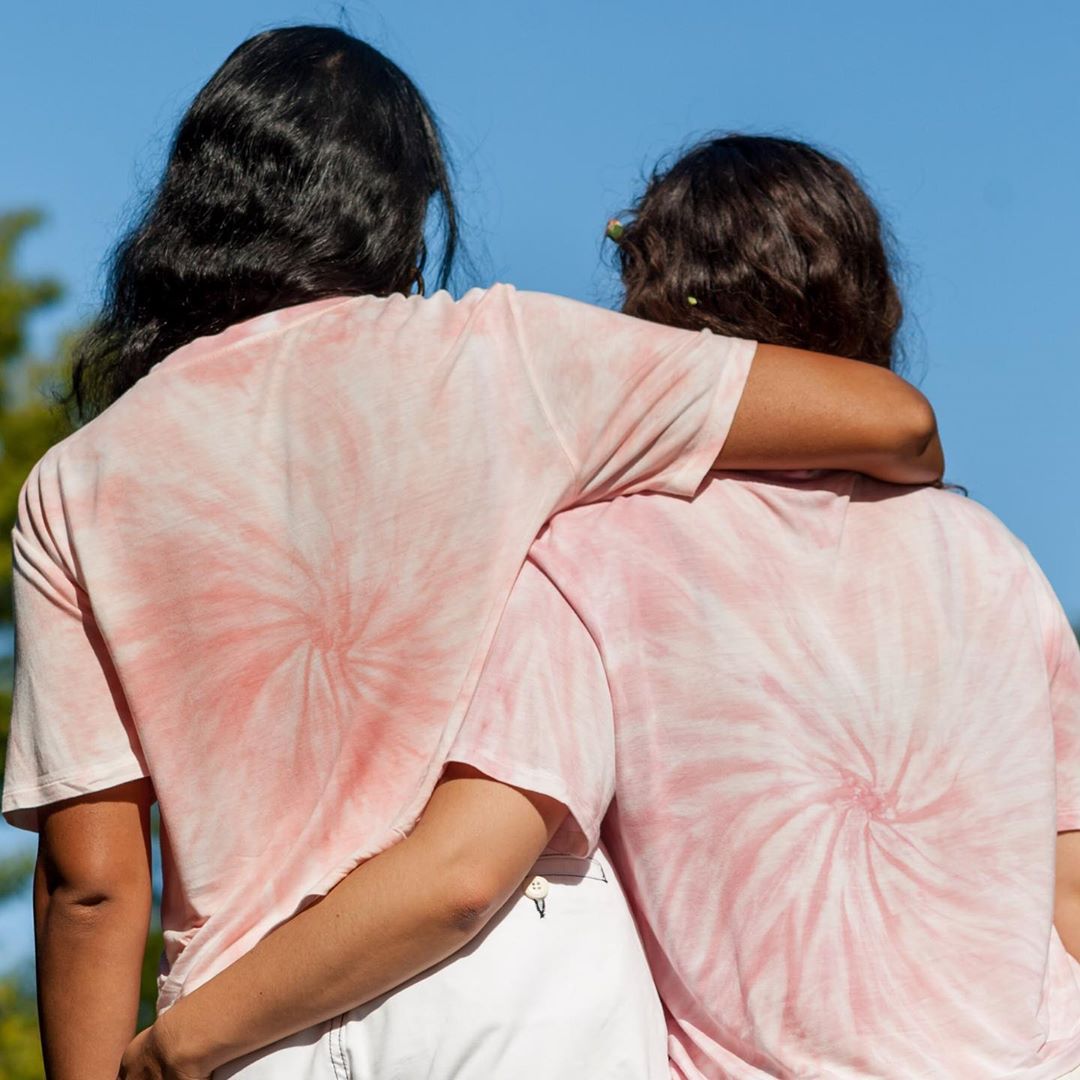 When it comes to tension or strife in romantic relationships, we have a world of examples and advice at our disposal—heartfelt movies, artistic poems, gut-wrenching novels, insightful advice columns, and *millions* of songs. But when it comes to the problems of the female friendship variety, we’re mostly just exposed to melodramatic reality TV à la the Real Housewives.

It’s tough to figure out how to navigate conflict with friends at this time in our lives when we don’t have a lot of guidance given to us the way it’s given to those struggling with romance. Pop culture and social media also often sensationalize female friendships and make us feel lousy when we see issues in our own, but never in others’. No friendship is going to eternally be that perfect moment of Carrie, Miranda, Samantha, and Charlotte blissfully strutting arm in arm in slow motion—because, like romantic relationships (shout it out with me), friendships can be complicated too.

From passive-aggressive tweet wars in high school (very on-brand for 2010) to dramatic roommate blunders in college to misunderstandings and deep questioning of values in adulthood, I’ve had my fair share of troubles with friends over the years. And that has definitely taught me lessons about healthy communication that doesn’t have to end in tears for both parties involved. To help you figure out how best to deal with these sorts of hurdles, we spoke to the experts to gain more insight on the do’s and don’ts of handling conflict with a close friend. With these in mind, you can come one step closer to understanding—and if need be, closure.

DO: Choose the right moment to reach out

When you want to address an issue, it’s never fair to spring it onto anyone. Even if your intentions are positive, addressing a conflict out of the blue without context will only blindside them and make this process way harder than it needs to be. You also want to make sure you don’t have this conversation when either of you are under a considerable amount of stress.

So how do you choose your moment? Dr. Jaime Zuckerman, a licensed clinical psychologist, offered this simple tip: “If something comes up for you in your mind more than three times a day, it’s worth exploring. Otherwise it will fester, leading to passive aggressive behaviors in the relationship.”

When you’re ready, shoot your friend a brief text letting them know that you want to take a few minutes to chat about something that’s been on your mind. If they express discomfort or hesitation, ask them how much time they need, and to let you know when they’re ready to talk.

It’s important to respect their decision, since other factors might be contributing to their current situation too. “It may be that they are avoiding the conversation because they have significant anxiety surrounding confrontation—not because they don’t care,” Zuckerman noted.

DO: Know the best way to engage in conversation

So you’ve both decided on when you want to talk. Now it’s important to consider the best way. Everyone’s different—some prefer written words, some like to to hear your voice, and some want to be able to see your face. However, when dealing with more pressing issues, be sure to consider the pros/cons of these methods.

While you might be an avid texter, tone of voice and body language can sometimes get lost when trying to convey your thoughts in this form. Alternatively, meeting in person might become awkward if you end up having a loud exchange in front of others. Ultimately, employ the method that makes you feel most at ease, so that the conversation can flow smoothly without distractions. If you do decide to go the text or email route, these are Zuckerman’s tips for messaging etiquette:

DON’T: Gear up for battle

Going into this, you might be thinking of it as a confrontation. Nicole Sbordone, LCSW, noted that the word “confrontation” has a negative connotation in and of itself. She encouraged us to “communicate by being assertive and bringing up topics that yes, may lead to confrontation, but ultimately will help to improve the friendship.”

Approach this with an end-goal in mind. If that goal is to keep this friend in your life, it’s worth salvaging the friendship through healthy, level-headed communication.

DO: Plan out what you want to say

There’s nothing worse than hitting that “send” button too early, or letting something slip that you didn’t let your mind process first. Jessie Bohnenkamp, a licensed professional counselor specializing in female anxiety and relationships, advised that to stay as sensible and on-topic as you can, always plan ahead.

“Write out your complaints, and take time to articulate what you really need to communicate before you bring up the issue with your friend,” Bohnenkamp explained. “Think about what their responses might be, and what you’ll say, so that you’re prepared and less likely to get flustered and say something you don’t intend.”

Though the situation might be pretty serious, it’s really important that you don’t go into this armed with insults and a laundry list of ways they’ve wronged you. Maintain your respect and understanding for the other person by avoiding any negative language or placing blame. You don’t want your friend to get defensive and worked up in response.

Bohnenkamp suggested sticking to making statements about how their specific behavior has made you feel, rather than criticizing their character or personality. She added that using phrases like, “It hurt my feelings when you canceled on me last minute,” rather than ones like, “You’re such a flake. I can never count on you,” can help express your side of things while still appearing considerate.

Zuckerman recommended to minimize using the words “you” and “your” (since these can make your friend feel ganged up on), and to substitute “but” with “and” (as it avoids negating what was said previously). For example, instead of saying “I care about you, but I am hurt by what you did,” you could say “I care about you and I am hurt by what you did.”

DO: Stand by your feelings, but keep an open mind

Ultimately, you’re both trying to get your viewpoints across to each other to try and come to an agreement. But there will likely be things you still can’t see eye-to-eye on. You can acknowledge their side of things and say that you hear what they’re saying, and it’s OK if both of you disagree with each other, Sbordone said. It’s all about how you move on from that disagreement.

Keep reminding yourself about the end-goal of this conversation and what your original motivation was, and use those to guide you through it in the most objective way you can. Zuckerman recommended adding in the phrase, “I’m sure you can understand,” after any expression of your concern, as this often limits an angry or passive-aggressive response (and helps them think objectively too).

If they make a point that ends up resonating with you, let yourself take it in—you won’t lose any power in gaining perspective.

Emotions will heighten on both sides at some point, and that is completely normal. It’s OK to have strong feelings about something you’ve said or heard—you’re human, and you have every right to feel the way you do—but be mindful when acting on them.

For your own intense emotions, Zuckerman advised acknowledging them, sitting with them, and not immediately acting on them in an attempt to get rid of them. She added that you shouldn’t feel trapped in the discussion or hesitate to take the time you need to collect yourself to maintain a healthy and rational dialogue.

Now, if you notice their emotions getting the better of them, don’t try to match their level. “If they raise their voice, don’t raise your voice in response,” Zuckerman said. “If they start fighting dirty, don’t one-up them. This will ensure the demise of the communication. Rather, remain neutral and consistent in emotion (even if you are raging inside), regardless of how high or low they go.”

DO: Accept that your friendship might have hit its expiration date

So you’ve both said what you’ve wanted to say. You may have gone into this hoping to have things go back to the way they were (which could totally happen!), but that may no longer look like a possibility for you in this case. When trying to figure out where to go from here, “I think it’ll be known for both of you fairly soon if it’s not beneficial to continue the friendship,” Sbordone said. “You could agree on taking some space for a while and then coming back to re-evaluate.”

If you’ve taken that space and decided that it is best for both of you to ultimately part ways, know that it doesn’t have to equate to unresolved tension, Zuckerman noted. If possible, make it amicable and agree to disagree. Let them know you still care about them and wish them well.

You can finally walk away from this knowing you did everything you could to salvage this friendship—which in and of itself is something to be really proud of.