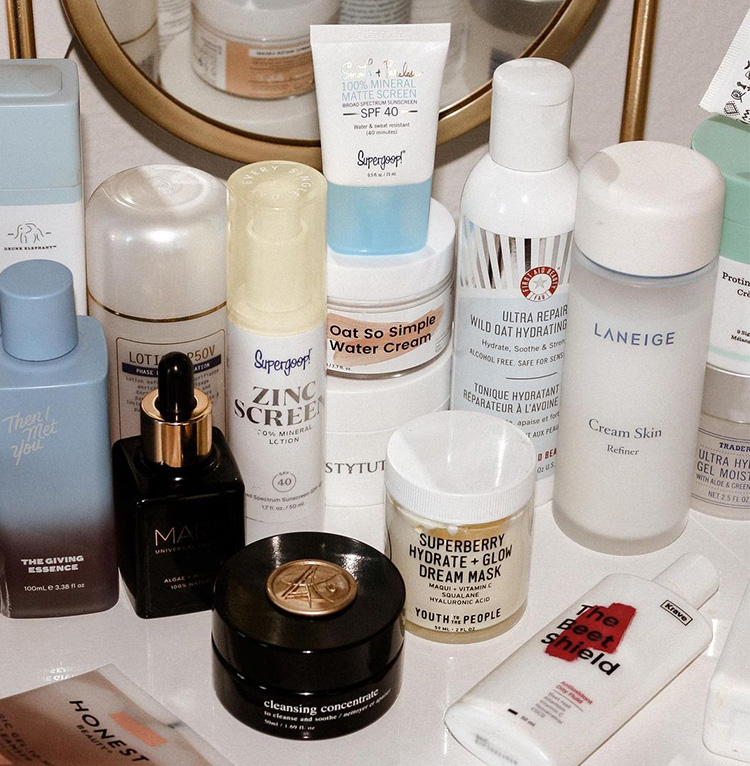 As a beauty editor, I’ve run the gamut when it comes to buzzy beauty products, and finally trying them feels like an initiation of sorts. You know the ones: Augustinus Bader’s The Cream, Skinceuticals C E Ferulic, Creme De La Mer, and Elta MD sunscreens—they have all graced my presence at some point. Some have become my staples (Elta MD UV Clear is God tier), others seem a bit overhyped to me (*cough cough* La Mer), but nothing was thrown at me quite like Biologique Recherche’s Lotion P50, the smelly toner that’s apparently so good that people put up with the horrid scent. After a year of using it, I see why. 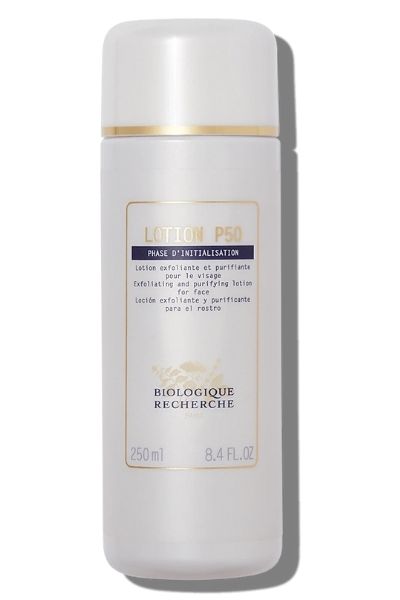 Biologique Recherche struck gold with Lotion P50—it’s been around for decades and is hailed as a “facial in a bottle,” thanks to its purifying, toning, and balancing qualities you usually can’t achieve without the helping hands of an esthetician. Some of the standout ingredients include lactic and salicylic acid, which obviously exfoliate and help with skin texture and tone. But two of the most interesting ingredients in the lineup are vinegar and horseradish root extract—what gives P50 its sour scent (which, thankfully, doesn’t linger on your face). This is what makes it so unique from all the other toners on the market (and why people just can’t stop talking about it).

Which P50 Should You Buy?

P50 comes in six different formulas with varying strengths, and unless you know what you’re looking for, it can be very confusing to know which one you should buy. The first time I ordered it, I had no idea there were different types and ordered the P50V and had to send it back and reorder, so make sure to double check which one you’re buying and that it’s the right one for you.

There is some technique involved in using P50 effectively. Estheticians swear that the best way to apply the product is by applying it to a cotton round and pressing it into the skin (like this) in upward motions, not swiping it all across your face like you would a regular toner. When I first started using the product, this is what I did, but I felt like I was wasting so much and wanted a little more oomph, so I started dripping a little bit directly into my palms and pressing it into my skin with my hands like I would an essence. If your skin is sensitive, I would stick with the cotton round technique, but if you want a little more bang for your buck, your hands have it. 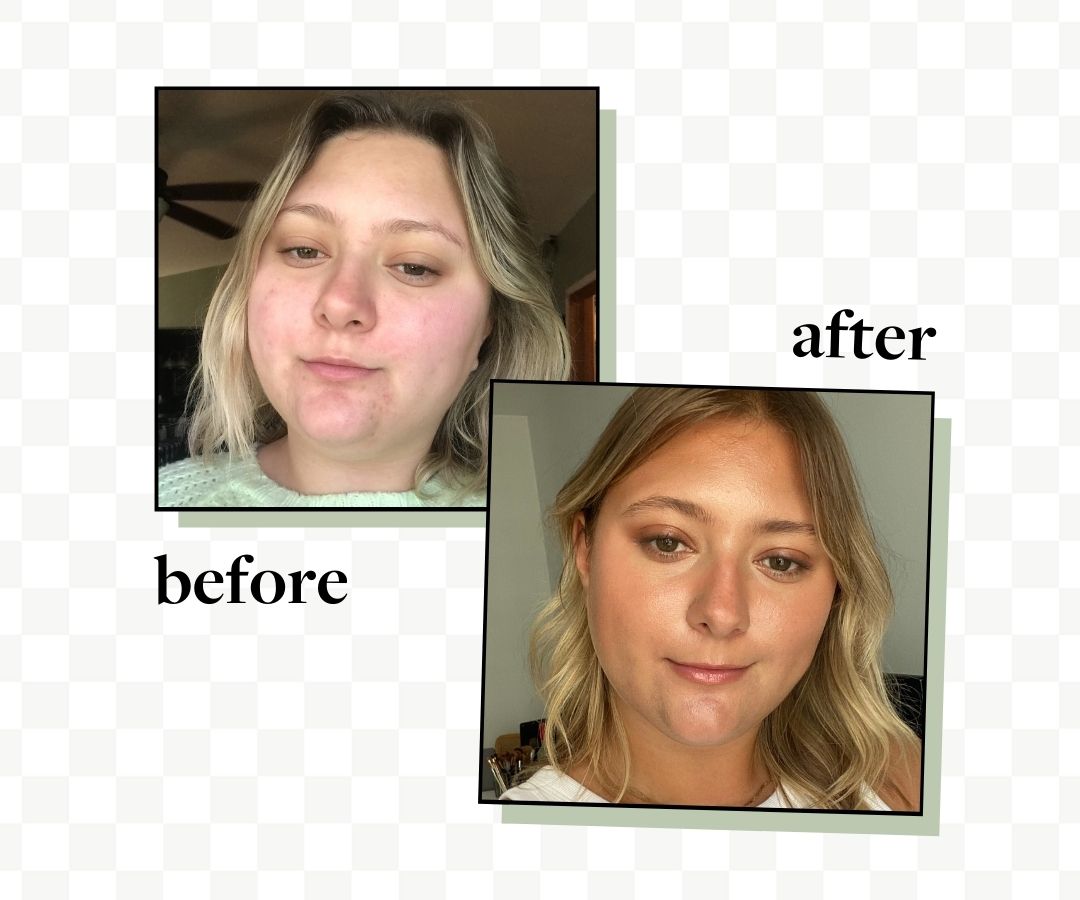 Before: April 2020, the day after I used P50 for the first time with nothing on my face After: September 2021, with a little bit of skincare (and lots of summer sun)

I have combination/oily skin, and while some products can make me tingle a little bit, it’s pretty hard to penetrate the layers of my skin. I go hard with my tret prescription and an AHA most nights and never bat an eye about how my skin will react, but when I first started using P50, it absolutely wrecked my skin.

The first night I used the product, it was tingly and splotchy; my face resembled a Pepperoni Lover’s pizza. I put on so much Skin Food and even followed with an oil because I figured I’d have a little drying. I woke up the next morning, and my skin—which usually has lots of remaining Skin Food on top of it—felt very dry, and my splotches were still pretty noticeable. But what was really bad was my acne. My face was broken out worse than I’d seen it in a while: lots of small dots all over my face, cystic acne on my chin and jawline, and just overall bumpy, rough texture that I wanted so badly to take a piece of sandpaper to. However, it did look like the acne I already had was starting to clear up, so I hoped that this was just purging.

So I used it another night—still burning, still splotches, still dry AF. But when I woke up the next morning, all of the acne that I had the previous day had already come to a whitehead. I lost the battle against picking at my face, slapped on a spot treatment, and went about my day.

After reading articles and posts on Reddit and watching dozens of YouTube videos, I’m seeing that purging is a huge trend with this product. Dozens of reviewers have said their skin purged for more than a few months (with most saying about a month or less), but the skin that was revealed afterward is close to pristine. They also explained that although their skin was purging and breaking out, they could tell it was getting healthier underneath all those breakouts. So, I kept at it. 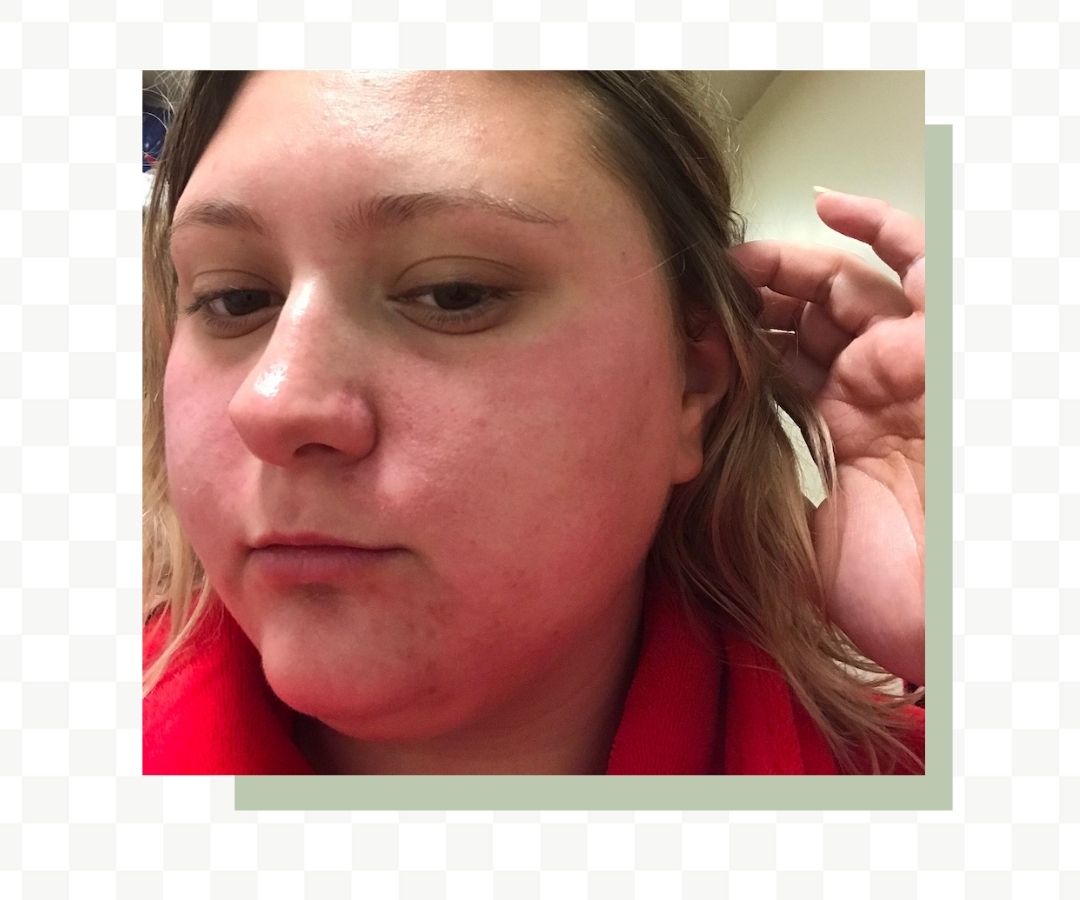 May 2020, after I used tretinoin for the first time again since trying P50

After a few weeks, I decided to add my tretinoin prescription to the mix. I wanted to follow a routine of using them every other night, with one or two days in the week as a break for my skin. Let me tell you, at first, this was a disaster. My face got so swollen and red, and it was painful. Fearing for my life, I stopped using tret and P50 altogether for about a week to get my skin back to a healthy state, then I started my P50 journey again, except I began using it in the morning and my tret at night, and this turned out to be the secret sauce.

After continued use, my skin was clearer and brighter, and whenever I did break out, the spots went away quickly instead of lingering on my skin for weeks like usual. My skin was smooth and practically texture-free for months when I used the product religiously. And how I really know it works? I ran out and put off repurchasing to go through some of the other toners in my arsenal (I try beauty products in the name of science, what can I say), and my skin was not happy with me. I immediately noticed a difference—like my skin went through P50 withdrawals. The second I started using it again, it breathed an internal sigh of relief and was back to its bright, beautiful self.

Biologique Recherche, the spicy little French minx that it is, plays really hard to get. You can only buy BR at participating spas, which makes finding it online (and during a pandemic, no less) a bit tricky. When I first ordered, I purchased it directly from an esthetician on Instagram (a great way to support a small business and reap the benefits of fantastic skin), but when it came time to repurchase, I ordered through celebrity esthetician Joanna Czech’s website. You have to make an account to order, which is a bit of a pain, but you get free samples of other expensive BR products with your order if you ask, and it also comes quickly.

Final Verdict: P50 is worth it

Biologique Recherche’s Lotion P50 might just be the one beauty product where I understand the hype—and I’m as skeptical as they come. Our journey together was a bit tumultuous, but I’m so glad I stuck it out for the long run. There’s no denying the visible results I’ve achieved after using it for a year, and I can’t wait to see the balancing and anti-aging effects I’ll receive by keeping in my routine long term. It’s pricey and makes me gag every time I apply it, but I’m willing to overlook its flaws for the beautiful skin it gives me. 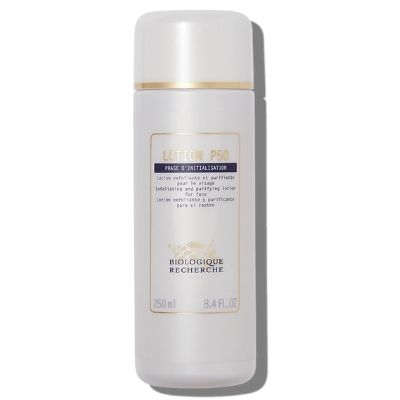 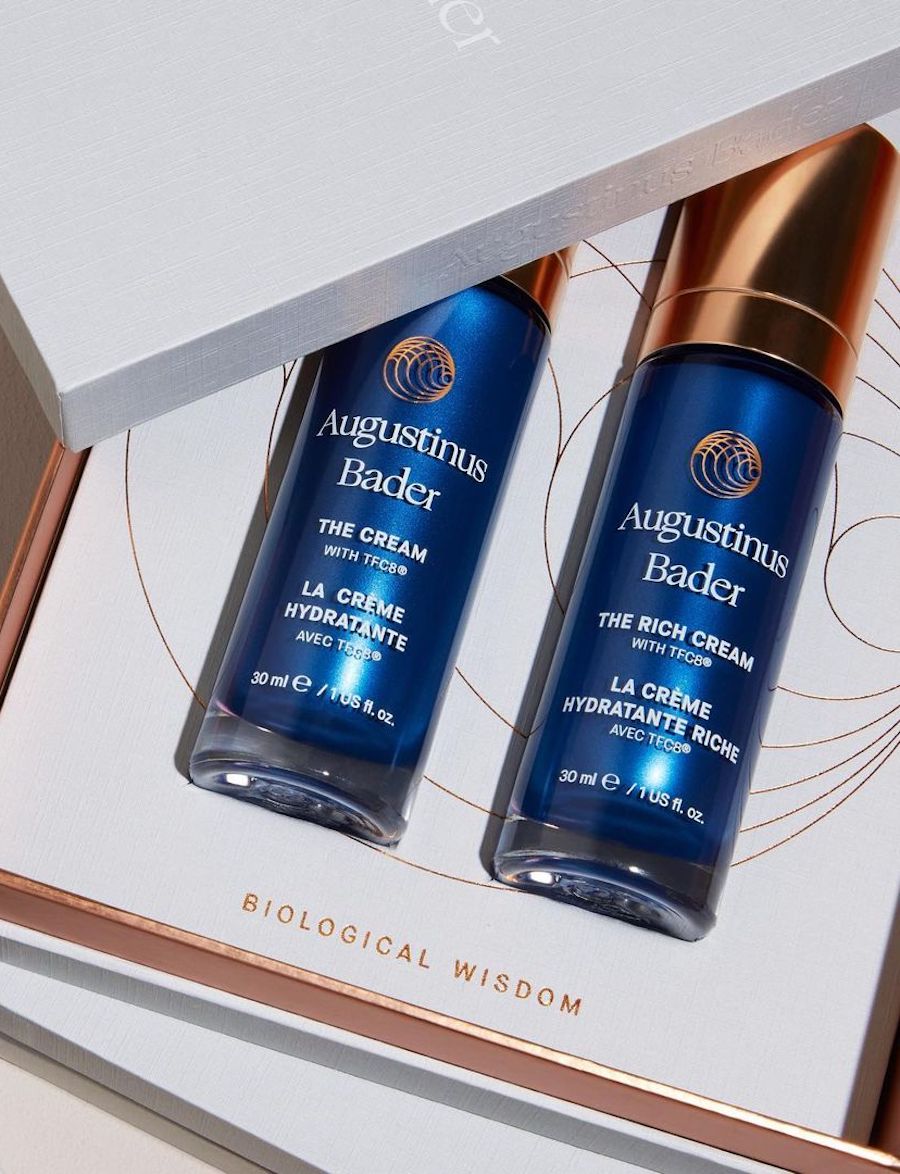 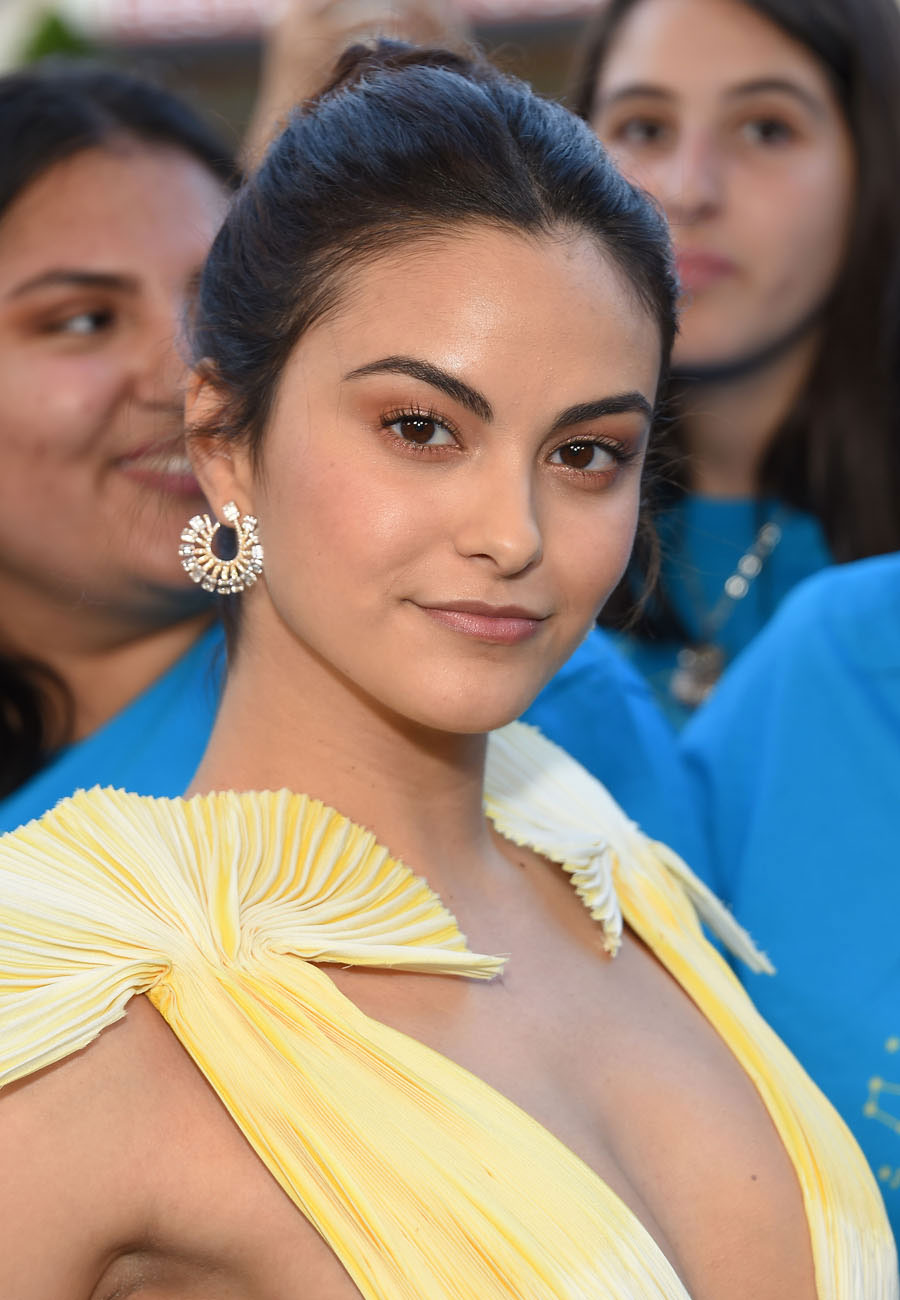