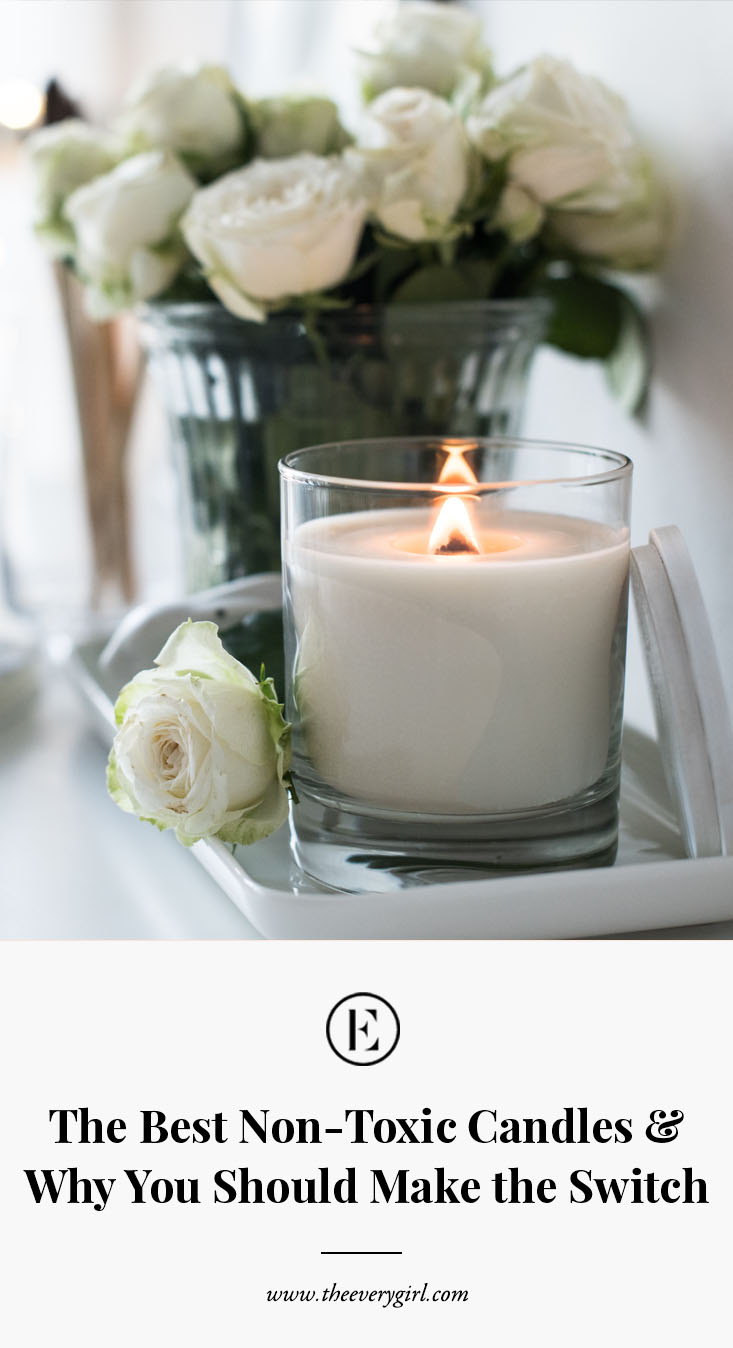 Candles are my kryptonite. Just when I’ve made the rational, adult decision not to buy any more, I’m drawn to a certain nice-smelling aisle in Target. I love a good seasonal scent, and I am a sucker for a chic container. Until recently, though, I hadn’t given much thought to what’s actually in the candle, and I certainly didn’t think the ingredients could be bad for my health.

Both clean eating and clean beauty products have become hot topics. Even clean cleaning products have been given their due, but less attention has been paid to this common home decor item. One reason? There’s a lot of conflicting evidence around the potential dangers candles may pose.

In 2017, a study at the University of Copenhagen found that breathing in particles from burning candles could have a similar effect as inhaling diesel exhaust fumes. Possible side effects included lung inflammation as well as lung cancer. However, this study was conducted on mice, not humans, and the candles were made from stearin wax, which is derived from animal fat. Stearin wax is common in Europe, but paraffin wax (made from petroleum or coal) is more commonly used in the United States.

In 2019, the British newspaper Daily Mail piggybacked on this study by doing some research of their own. They asked a lab that monitors air quality to assess the levels of pollution emitted by 10 citrus-scented candles and compared them to the output from a diesel engine. These findings, while admittedly not done by a research institution or published in a peer-reviewed journal, were insightful, given that it’s the only research I came across that named actual candle brands. The newspaper also gave the brands the chance to comment on their findings.

Delving deeper, I came across a study in the peer-reviewed journal of Regulatory Toxicology and Pharmacology that concluded that, under normal conditions, “scented candles do not pose known health risks to the consumer.” However, this study listed SC Johnson & Son and Procter & Gamble, two major manufacturers of candles, as co-authors. The extent of their involvement is unclear, but under the study’s “Conflict of Interest” section, it states that “Financial support for this work has been provided by a consortium of companies organized by the Research Institute for Fragrance Materials Inc.” The RIFM is a New Jersey nonprofit that claims that all of their research is reviewed by “an international group of dermatologists, pathologists, toxicologists environmental, and respiratory scientists that have no commercial ties to the fragrance industry.” While their methods may be sound, a study in favor of scented candles, co-sponsored by candle manufacturers, still gives us pause.

Similarly, a study sponsored by international candle organizations — including the U.S.-based National Candle Association — compared paraffin wax, soy wax, palm wax, and beeswax candles and determined that they all burned similarly and safely. This study was nicknamed the Ökometric study, and its authors said it was “the most extensive and rigorous scientific investigation of candle emissions to date” and analyzed “more than 300 chemicals known or suspected of toxicity, health risks, or respiratory irritation at elevated concentrations.” The only problem is this study, commissioned and published by the candle organizations, does not appear to have been published in a peer-reviewed journal. In other words, an independent third-party hasn’t double-checked their work. At the end of the study, the authors stated that “a formal paper on the Ökometric study will be submitted to a peer-reviewed journal for publication,” but looking at the research section of the NCA’s website, it does not look like it’s been published in a journal in the 12 years since the study was done (I reached out to the NCA via phone and email to confirm, but received no response).

Another study, conducted at South Carolina State University in 2009, raised concerns about the chemicals released from burning paraffin candles. The study’s lead researcher, Dr. Ruhullah Massoudi, a chemistry professor at the university, said, “For a person who lights a candle every day for years or just uses them frequently, inhalation of these dangerous pollutants drifting in the air could contribute to the development of health risks like cancer, common allergies, and even asthma.” The NCA, in turn, has called the professor’s findings “bad science,” partly, they said, because it was not published in a peer-reviewed journal. Whether it was in response to the NCA’s criticism or not, the study was later published in 2017 in the peer-reviewed International Journal of Tropical Disease & Health (read more about the article’s peer review process here). Instead of paraffin wax, Massoudi encourages consumers to instead use soy candles, noting that “none of the vegetable-based candles produced toxic chemicals.” The NCA, however, pointed out a potential conflict of interest, stating that the research project was funded by the US Department of Agriculture’s (USDA) National Institute of Food and Agriculture (NIFA) agency. SCSU also states “Massoudi’s research stems from a desire to address a possible public health concern, boost the American agricultural economy, and promote sustainability.”

To recap, the Danish study was insightful because it specifically looked at how candle particles affected the body (albeit, the bodies of mice), while the other studies measured toxicity levels for certain chemicals in a controlled environment. But the Danes used stearin candles, which are less common in the U.S. The Daily Mail research helped to assess specific candle brands but did not carry the same scientific backing as some of the other studies. The remaining three studies were potentially problematic because of possible conflicts of interest. Neither research teams for the Okometric study or the study sponsored by candle manufacturers disclosed the exact brand of candles that were tested (this would have been particularly helpful to know in the study where SC Johnson & Son and Procter & Gamble were involved to determine if the candles tested were made by those manufacturers).

I thought maybe I could count on a government agency to clarify the conflicting information, but as Snopes reported, “There doesn’t seem to be an agency in the United States that has jurisdiction to oversee whether scented candles present a health risk or not.” The Environmental Protection Agency weighed in on candle wicks back in 2002 but has otherwise provided little insight. When I called the Federal Trade Commission to discuss certain advertising claims on candle labels, they were eager to help but found that no cases have been brought against candles in the last 30 years. I also reached out to the USDA, since they oversee soy production, and they said that while they “regulate the development of biotech varieties of soybean plants, once they are approved, we do not continue any oversight.” The USDA suggested that I reach out to the Center for Disease Control, other consumer-focused agencies, or the NCA.

Where does that leave us? Conflicting evidence, plus a lack of transparency and oversight, makes it difficult to know exactly what we’re getting as consumers. In the same way that you can have a mostly clean diet and occasionally indulge in McDonald’s fries, it’s probably safe to sometimes light a candle that may not be up to snuff. The point isn’t to throw everything out, but rather to make more informed decisions moving forward. Here are some tips on how to be a more mindful consumer.

Where does that leave us? Conflicting evidence, plus a lack of transparency and oversight, makes it difficult to know exactly what we’re getting as consumers.

Like I said, paraffin wax is derived from petroleum or coal. Soy wax comes from soybeans, and beeswax is made from — you guessed it — beeswax.

According to a study done by Iowa State University in conjunction with the Center for Crops Utilization Research, soy has become a popular and healthier alternative to paraffin, with proponents praising its renewable and biodegradable properties. Yet marketing jargon makes it hard to determine what really constitutes a soy candle. A wellness blogger and nutrition consultant noted that a candle labeled as “pure soy” only needs to contain 51 percent of soy wax, so the other 49 percent could be paraffin. I checked with the FTC about the use of “pure” on a label, and they said, “We don’t have any guidance on using this term in marketing and advertising.” Still, according to the NCA, candles can contain a blend of wax varieties. Bath & Body Works candles are a great example. On their website, the company states that “The main ingredients for all formulas are vegetable wax, paraffin wax, and soy. Our Signature Collection Candles are considered vegetable wax candles. Although soy is an ingredient, our candles are not considered soy candles.”

Beeswax candles have also been around for thousands of years. They retain their natural color, are often unscented, and are non-GMO (critics of soy candles have raised concerns over whether the soybean plants may have been treated with pesticides, although this has not been substantiated and the USDA could not confirm). Some companies are also exploring the use of coconut-based wax, but be skeptical of claims that it’s the most eco-friendly wax, burns slower, or is soot-free, as we were not able to find scientific evidence to back up those claims. The NCA states that “There is no such thing as a soot-free wax. Sooting is primarily a factor of wick length and flame disturbance.”

While the toxicity of paraffin and other waxes is still up for debate, I personally feel more comfortable burning a candle made from more natural materials, like soy or coconut. To avoid any confusion, look for labels that break down the wax blend by percentage (For example, “100 percent soy wax”). Also, reducing the burn time can help limit exposure — always read the manufacturers’ instructions, but a good rule of thumb is no more than four hours.

Members of the NCA voluntarily agreed to no longer use lead wicks in the 1970s, and the U.S. Consumer Product Safety Commission issued an official ban in 2003, so it’s highly unlikely you’ll encounter a lead wick. However, some candles still use other metals to help wicks stand up straight. Opt for a 100 percent cotton wick or a wood wick.

The Fair Packaging and Labeling Act of 1967 made it so that the FTC and the Food and Drug Administration require all consumer commodities to be labeled to disclose their contents. The FDA does not regulate candles and instead points consumers to the CPSC for products such as “room fresheners” (it’s worth noting that the only candle-related information I could find on the CPSC’s website was for recalls for fire hazards or injuries).

However, advertising or marketing claims made on most product labels are overseen by the FTC and under the aforementioned law, manufacturers are permitted to list “fragrance” as an ingredient without disclosing the exact chemical makeup. The reason? It’s considered a “trade secret.”  This makes it impossible to discern whether certain synthetic and potentially harmful elements are present.

To be safe, seek out companies that clearly state their ingredients, use 100 percent naturally-derived essential oils, or are phthalate-free. Unscented candles, while a bit of a buzzkill, are also a good option. On that note, here are some natural candles we’re loving. 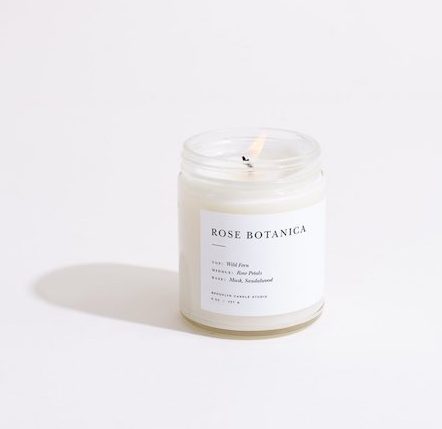 These candles check all the boxes and come in a variety of scents, from Japanese citrus to sweet fig. They’re also available at Nordstrom and Anthropologie. 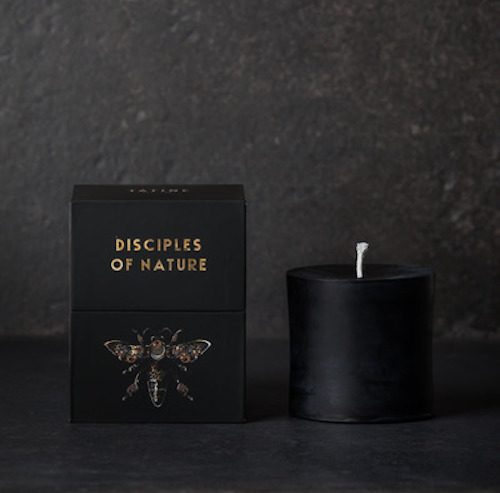 The simplicity of this moody candle is beautiful, but the packaging takes it to the next level. 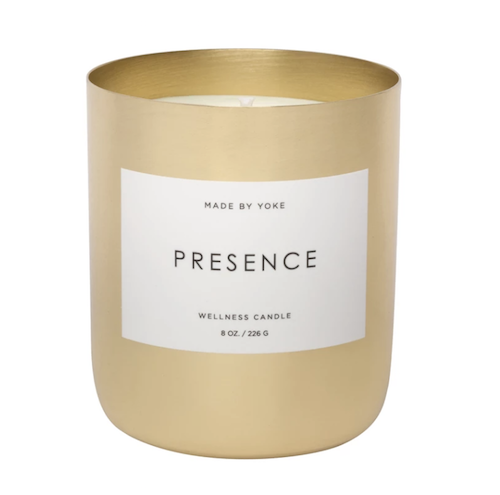 Designed by yoga and meditation teachers, this chic line of candles is good for both body and mind. 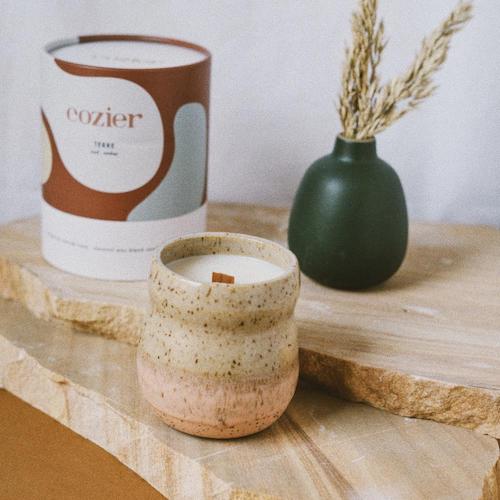 Housed in one-of-a-kind ceramic vessels, each candle is unique. 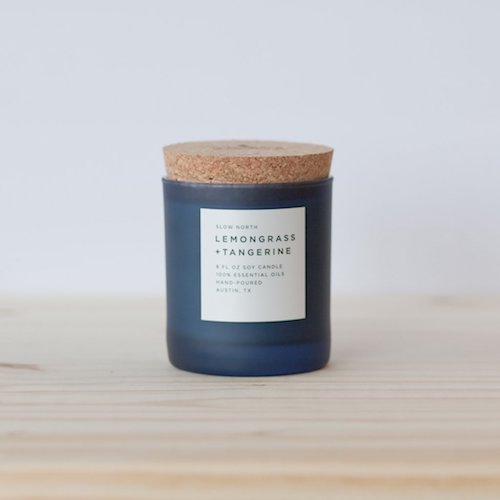 This brand is focused on sustainability and supporting American makers. 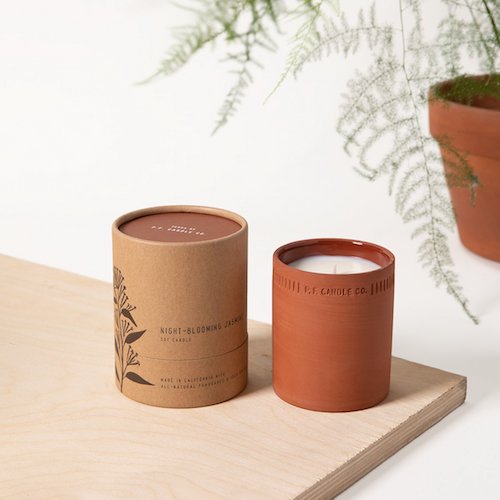 Plant ladies will love these all-natural candles that can be repurposed as a planter.