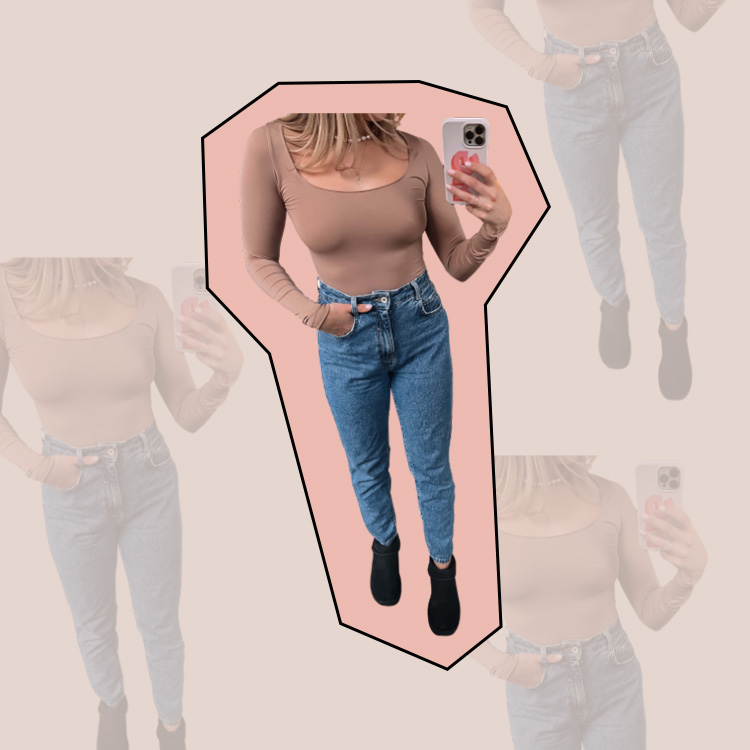 When the Kardashians started releasing brands, they garnered their fair share of eye rolls from the general public. People expected them to slap their names on any old item and upcharge them by an amount that most people wouldn’t even consider spending. But to everyone’s surprise, after people started testing out the likes of Good American and Skims, social media started buzzing over the fact that they were more than good—they were basics that deserved real hype. And nothing got more attention than the famous Skims bodysuits.

It makes sense: Who better to make shapewear and body-contouring pieces than Kim Kardashian herself? When she released Skims in 2019, there was immediate buzz, and one product in particular always circulated with claims of it being a miracle product: the bodysuits. Made to contour the body and serve as the base layer of any outfit you can dream up, people claimed that they’d never put anything on that made them feel so confident—so I decided to put them to the test, once and for all.

But not only did I test three of Skims’ most popular bodysuits; I also tested the ones that TikTok has been swearing is a near-identical dupe for a fraction of the price.

Ready for the low-down? Here’s what I think about the Skims essential bodysuits and if I think the dupe meets the mark. 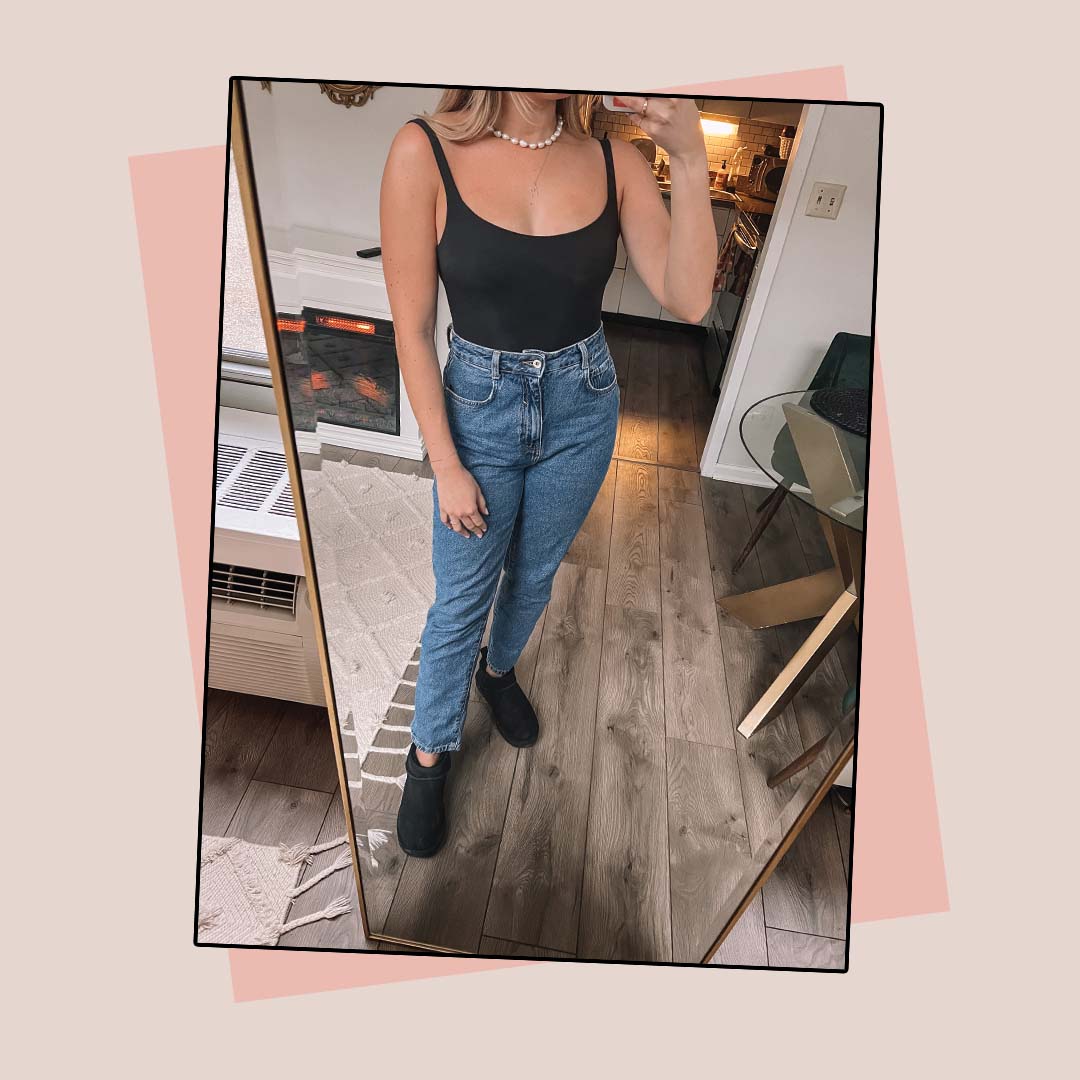 What I’m about to say is the absolute truth: When I put this on for the first time, I gasped.

The material of this is thin. When I took it out of the box, not only did it look thin, but it also looked smaller than I imagined, so I didn’t try it on right away and let it sit there for a couple of days. I can’t express this enough: I did not have high expectations.

It’s difficult to even explain the material. It’s incredibly soft and thin, and when you put it on, it literally feels like you aren’t wearing anything. But at the same time, it contoured my body (without flattening out my chest) in a way that I have never experienced before. Given the results, I’d expect the bodysuit to be tight and make me feel like I was suffocating, but instead it was one of the most comfortable things I’ve ever put on.

I also found that despite how thin they are, you don’t need a bra with them; the material provided enough support that I felt more comfortable without one. I absolutely love that it’s a bodysuit and not a regular tank—it makes tucking it into pants incredibly seamless and allows you to wear it with a pair of jeans and look sleek, not bulky. The result? A piece I feel more confident in than anything I’ve put on my body in recent memory. 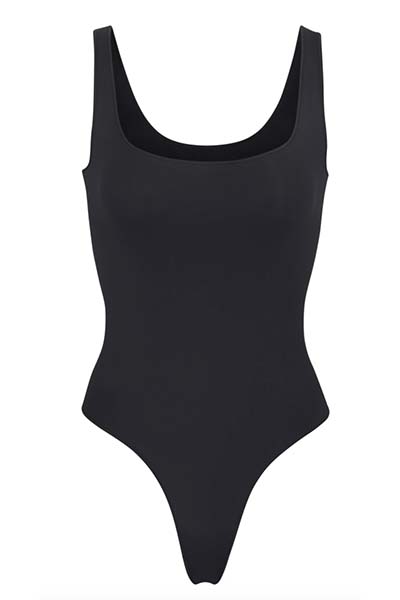 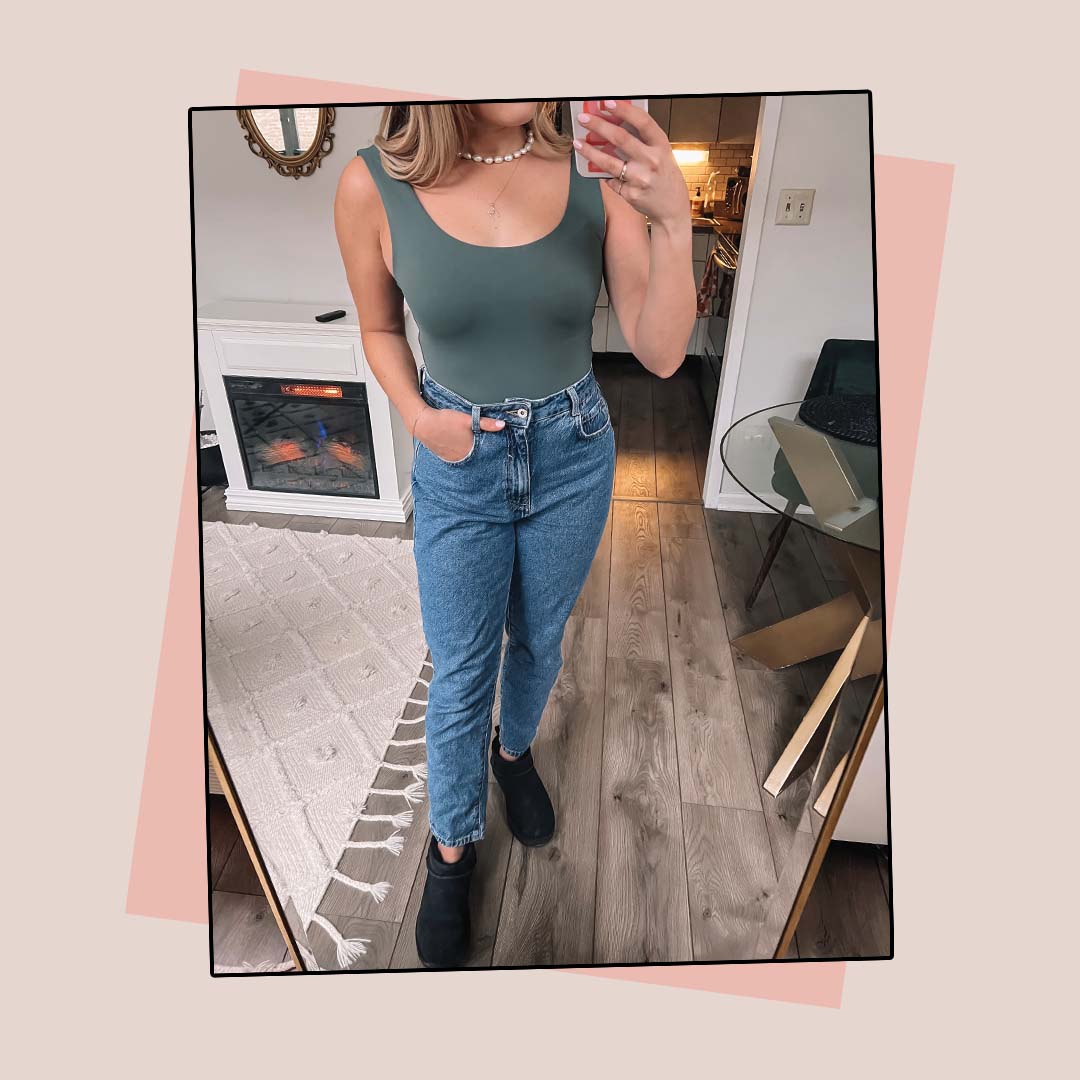 I’ll be the first to admit that I haven’t shopped at Express in years. But after seeing buzz about these bodysuits on TikTok and my coworker Jess texting me that she tried one and that it was amazing, I decided to give them another shot.

Off the bat, there’s one major difference between the two bodysuits: These have double layers, which isn’t necessarily a good or a bad thing. On one hand, you feel more secure and definitely don’t need a bra; on the other, it feels thicker than the Skims one but not in a way that was constricting or uncomfortable.

I felt just as confident in this bodysuit, and since they have options outside of the nude family (whereas Skims only comes in nudes and neutral shades), I could see myself ordering this in more colors to wear on its own come summer. At the end of the day, I think I’d reach for the Skims one more—but for a third of the price and a stock that’s less hard to get your hands on, this is pretty damn close, and the result is almost identical. 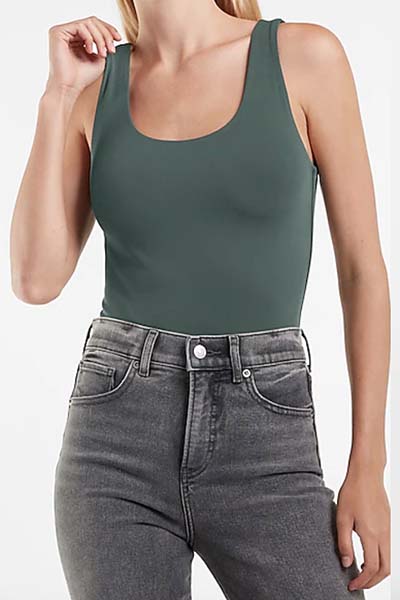 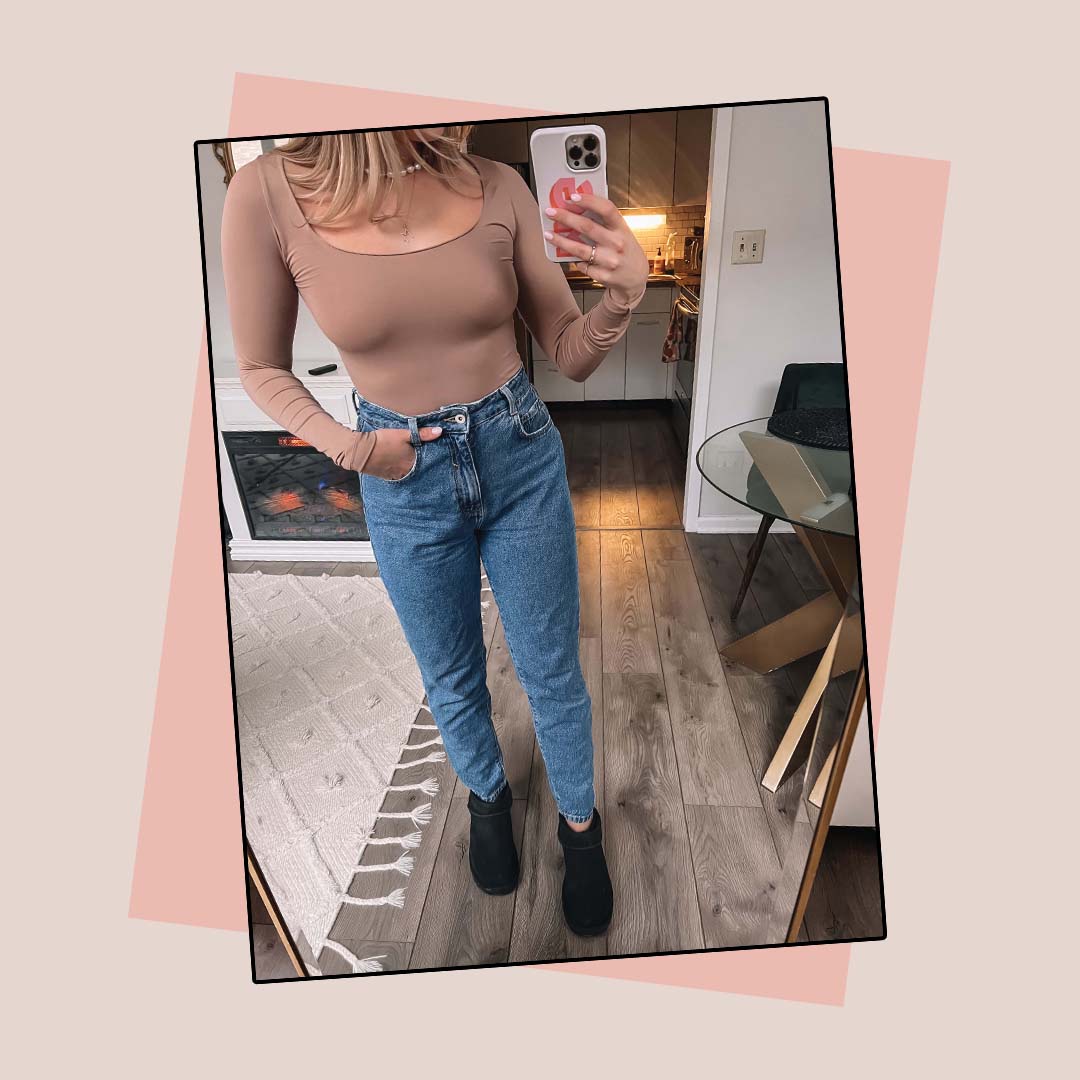 Of the three Skims tops I tried, this was the only one I had mixed feelings about. I found that while it gave a super flattering effect just like the tank, something about the material in a long sleeve felt a little constricting on me.

Despite that, I absolutely see a need for this in my wardrobe and have never found a nude that I feel is quite so flattering. Especially in the winter, I would layer this under jackets and sweatshirts to keep warm, but I could see myself wearing it just as often on its own. 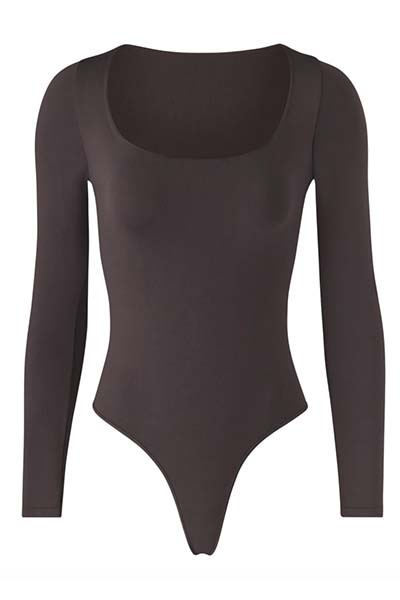 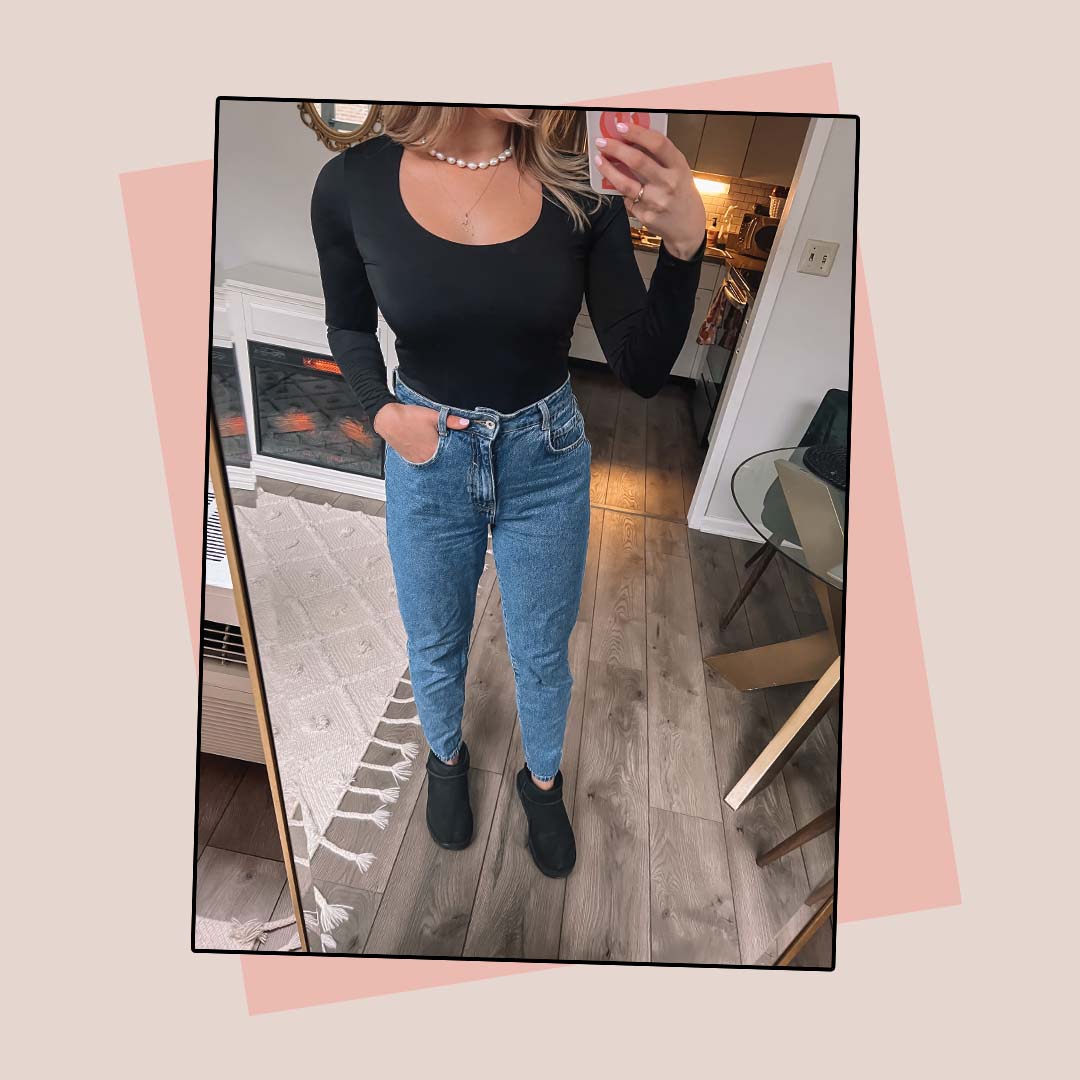 Between this version and the Skims, I actually preferred this one in the long sleeve. I found the double layer to feel more comfortable on my arms and that the slightly higher neckline led to a more seamless result. The black is a classic, but again, I could see myself picking up more colors in this to wear in the colder months, since I find a good long-sleeve near impossible to come by. 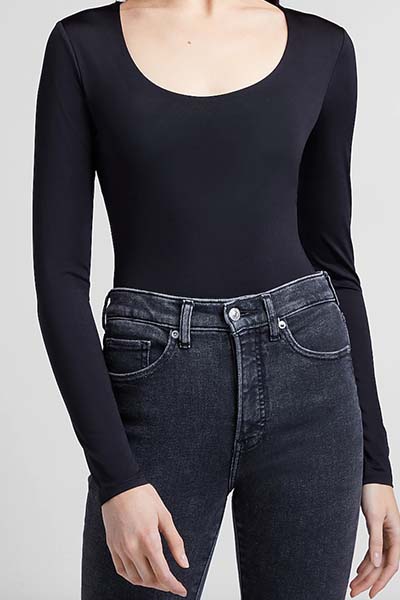 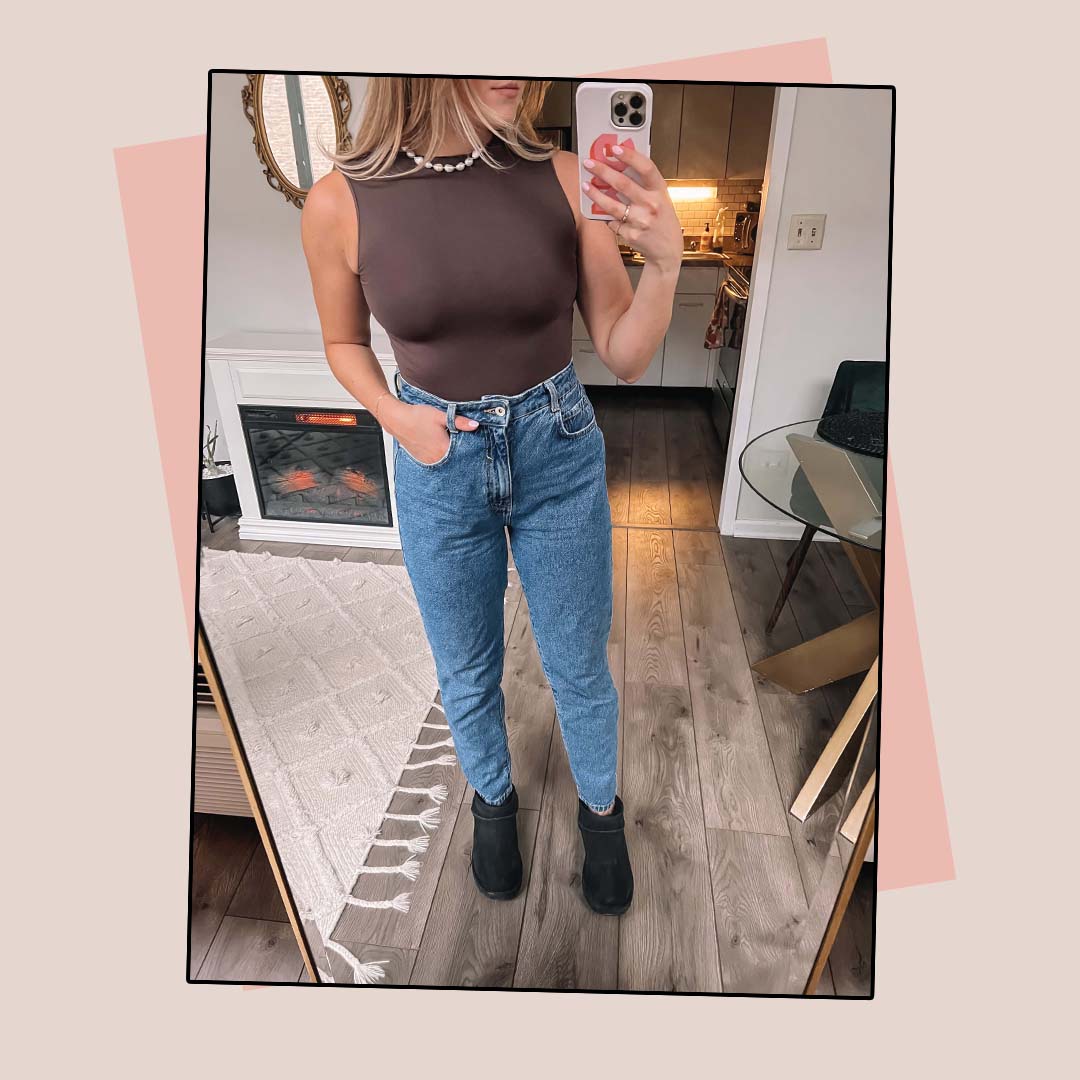 I absolutely love a high-neck tank, so I was not surprised that I was utterly and completely in love with this. I don’t think it could possibly be more flattering and love that it’s form-fitting and sexy without needing to worry about cleavage showing.

When the weather is warmer, I would absolutely wear this on its own every single day with a pair of denim shorts and call it a day—I’d feel like an absolute 10 doing it. If you want to wear a basic and run out of the house, you should let it be as amazing as this.

Until then, I’ll be layering it under every single jacket I own. 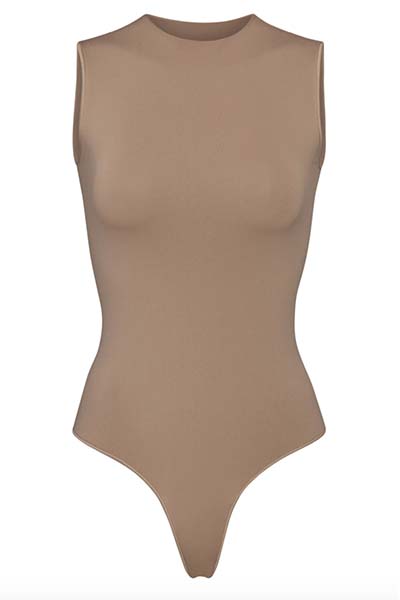 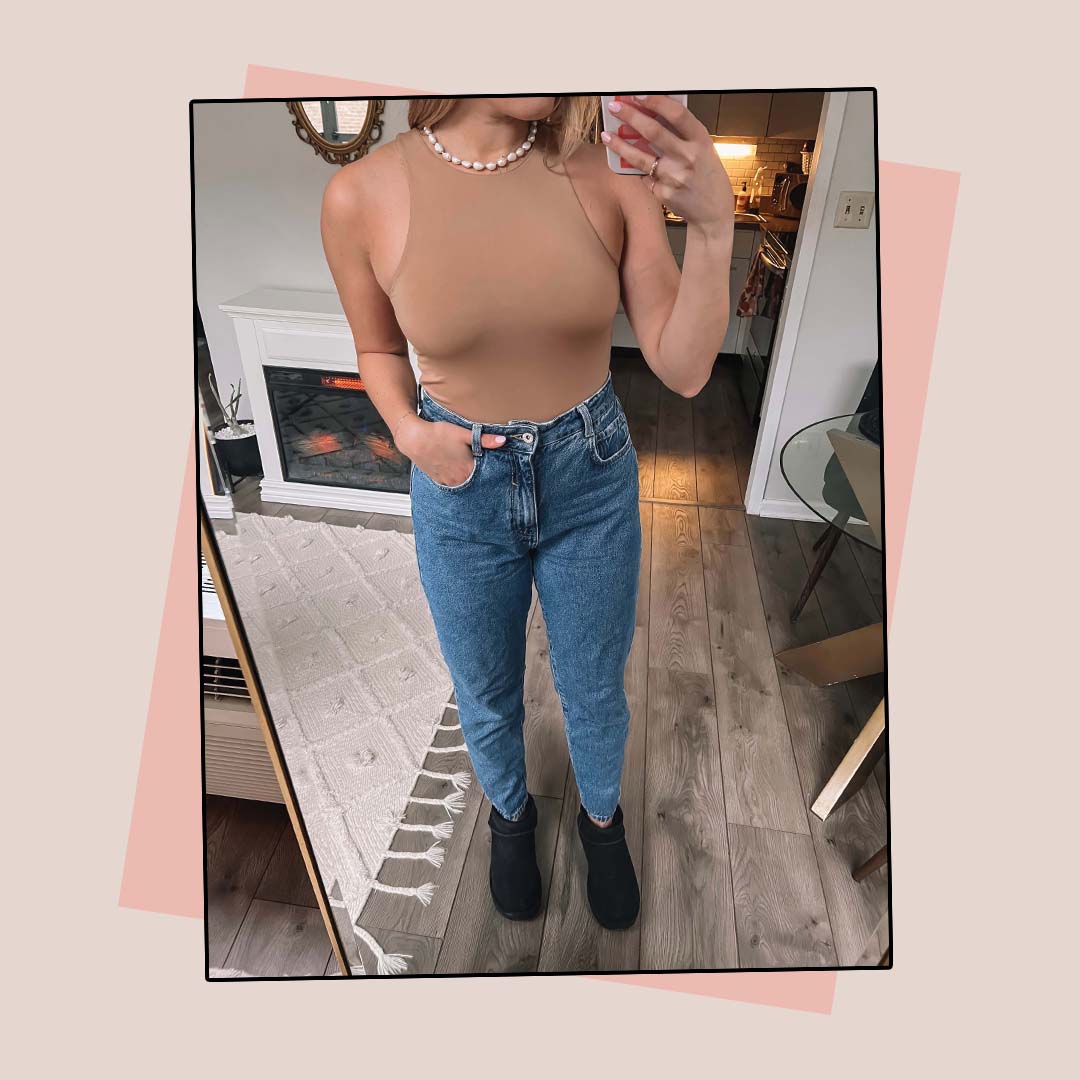 The only difference between this bodysuit and the Skims one is that this one has an ever-so-slightly lower cut near the arms, which didn’t bother me personally. They had the color I would have bought from Skims if it was in stock (which, at the time I ordered, it wasn’t), but despite the slightly thicker material, I’d call this a dead ringer for the Skims one and have a hard time choosing between the two if I were reaching for one in my closet. 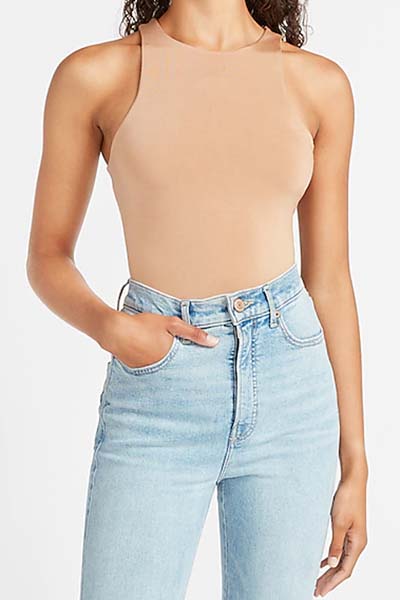 If push came to shove, I would choose the Skims bodysuits over the Express ones on account of the unique material that feels so much like you’re not wearing anything and given that they have a better size range. But—and that’s a big “but”—despite the difference in fabric, the Express ones give you an almost identical result for a fraction of the price. These converted me to be a full-on Skims lover, and I will definitely be ordering more Skims products in the future. But if you can’t get your size or you like the Express colors more, they’re an amazing option. You truly can’t go wrong with either. 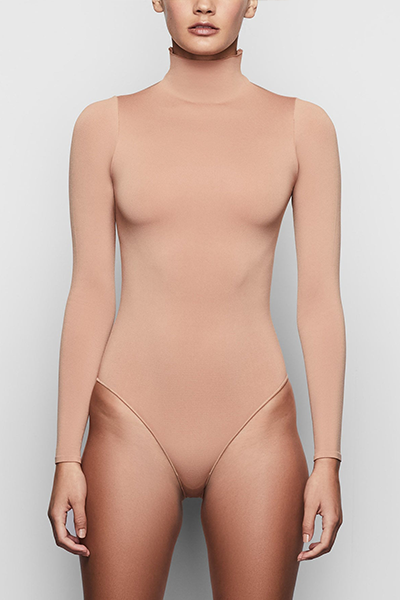 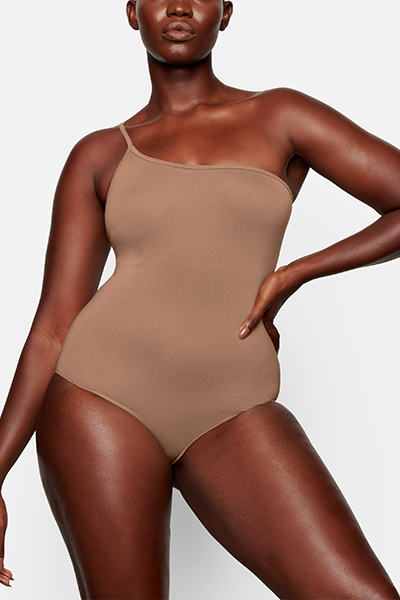 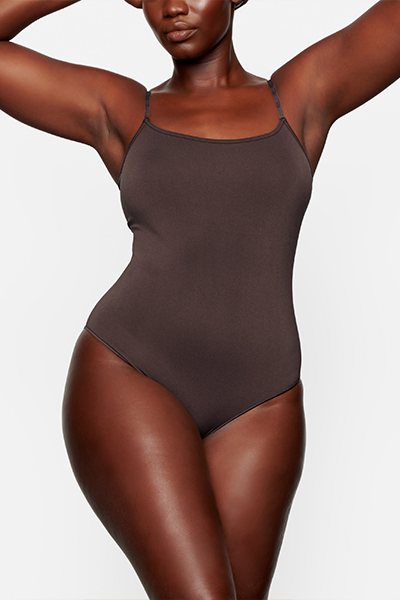 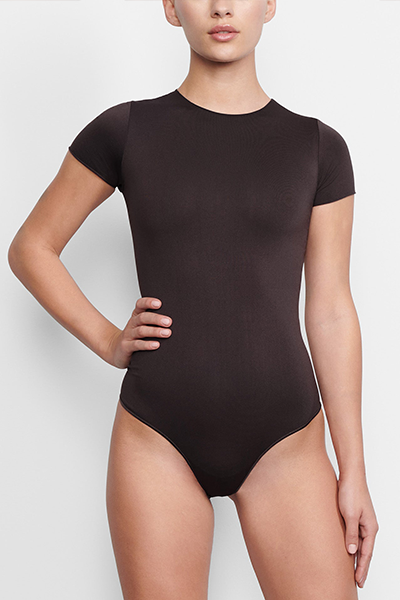 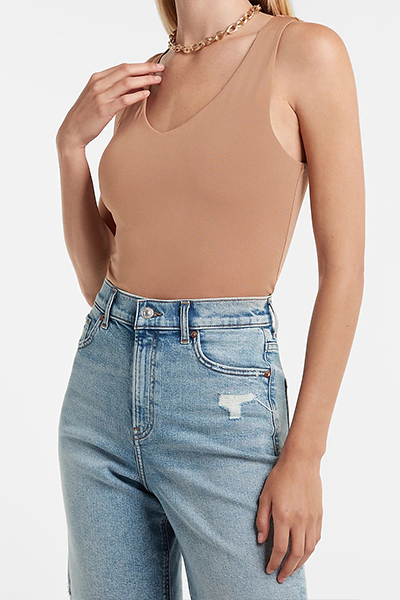 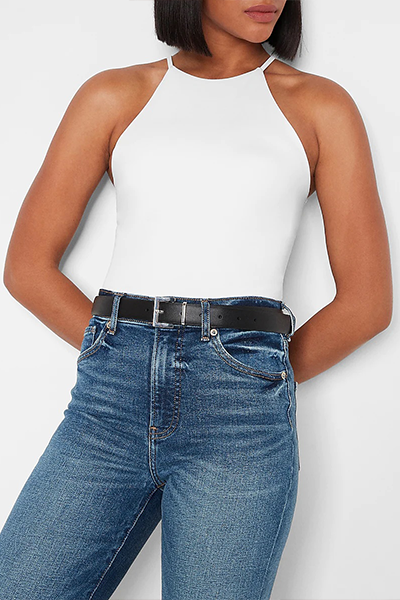 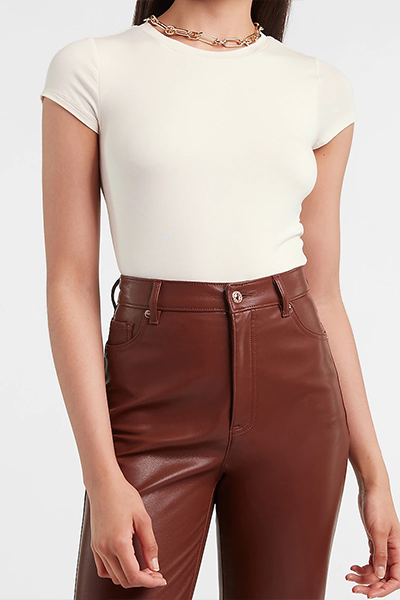 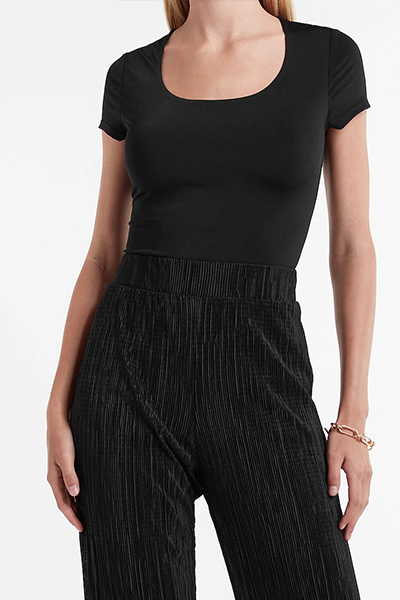 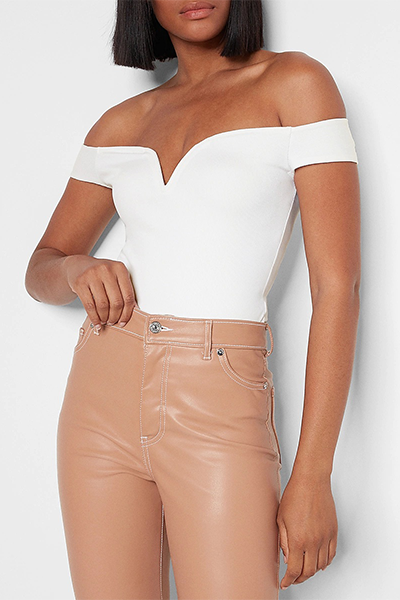 Ribbed Off The Shoulder Bodysuit 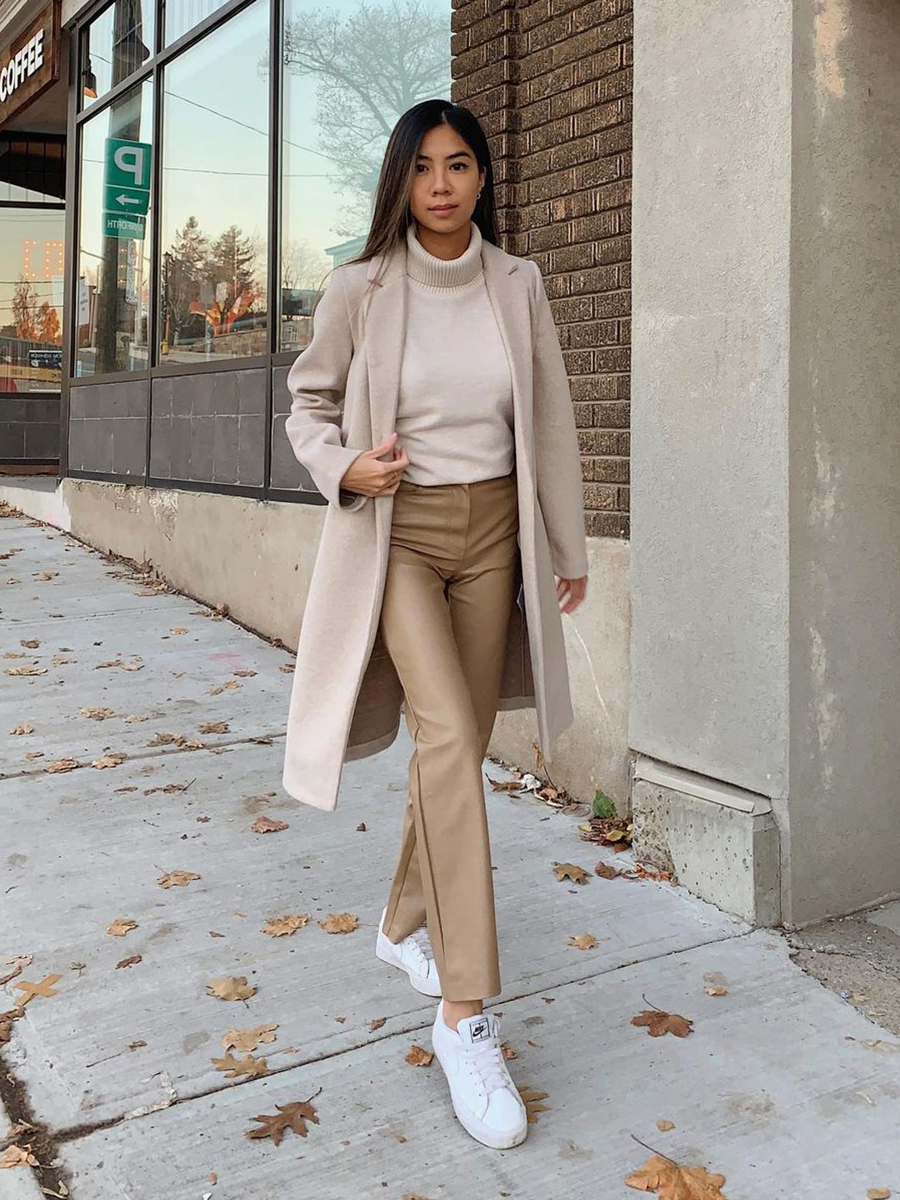 10 Wardrobe Staples Our Editors Are Bringing Into 2022
READ ON