Twenty days ago, I embarked on my first day of Whole30. Since then, I’ve gone to a lot of grocery stores, read a lot of labels, and put a lot of things back on their shelf.

Why? Because they have added sugar.

Of all the Whole30 rules (no grains, no alcohol, no legumes, no dairy, no added sugar), I figured this would be the hardest rule — but I didn’t realize just how hard it would be. I thought it would cancel out buying things like Oreos and vanilla lattes, and I was sadly very, very wrong. Even the foods that you don’t even slightly associate with sugar often have it as an added ingredient.

Of all the shocks and lessons of Whole30, so far the absolute biggest has been just how many foods have added sugar that you would never expect (and that truly don’t need it). If there’s one habit I want to keep up from this month, it’s to keep finding and eating the foods without refined sugar — because you can find them, it just takes a little more digging. It’s an easy way to be just a little healthier, especially when the sugar-free options taste exactly the same. These are the foods that tend to have added sugar that surprised me the most:

I’ve made a few different recipes that have required chicken or beef broth, and literally almost every one I picked up at Whole Foods had added sugar as the last ingredient. I had to take out my phone and Google which brands to stick to in order to find one. This was obviously a shock to see listed amongst other ingredients like veggies and chicken.

One of the small miracles of Whole30 is that bacon is allowed. But even ones that aren’t maple or flavored in any way often have sugar.

Basically all spices are allowed, but you still need to read labels to make sure that there isn’t sugar snuck in there — especially for spice blends. (This happened to me last week with a taco seasoning!).

I’d obviously expect super processed chai tea blends and the like to have added sugar, but I’ve always assumed the loose-leaf ones I’m used to getting at David’s and Adagio are as healthy as can be. Some of my favorite blends have “stevia” stuck on the end of their ingredient lists.

Yes, even when the front of the carton says sugar-free, it’s possible there’s added sugar in there (just labeled with a crazy-long name). To be safe, I’ve stuck to Trader Joe’s almond milk that’s nothing but almonds and water.

One day while I was in a pinch, I thought I might be OK getting a Panera salad and putting my own dressing on it. Low and behold, their chicken marinade has sugar in it. Anything that other foods are cooked in often has added sugar for taste.

I’ve bought Primal Kitchen’s (a Whole30-approved brand) version of all of the condiments I normally eat for this, but last night I picked up an organic kimchi paste out of my fridge (which I love to throw into stir-frys), and it had added sugar. Almost all toppings you scoop out of a jar are going to have added sugar thrown in there — even if they aren’t sweet.

I like to have a couple of Whole30-compliant foods on me in case of emergency, and I went to pick up some dried fruit to have if I needed it in a pinch. You guessed it: almost all of them had sugar added (to a food that’s already super sweet!). Trader Joe’s saved me with this once again with their dried fruits that have no added ingredients.

Other names for “sugar”

Another thing I’ve needed to get used to is how many foods disguise added sugar by calling it a word besides “sugar.” These are the words to look out for; they are just fancy words to refer to added sugar (it’s a lot) and added sweeteners (none of which are allowed on Whole30, and are something to look out for). 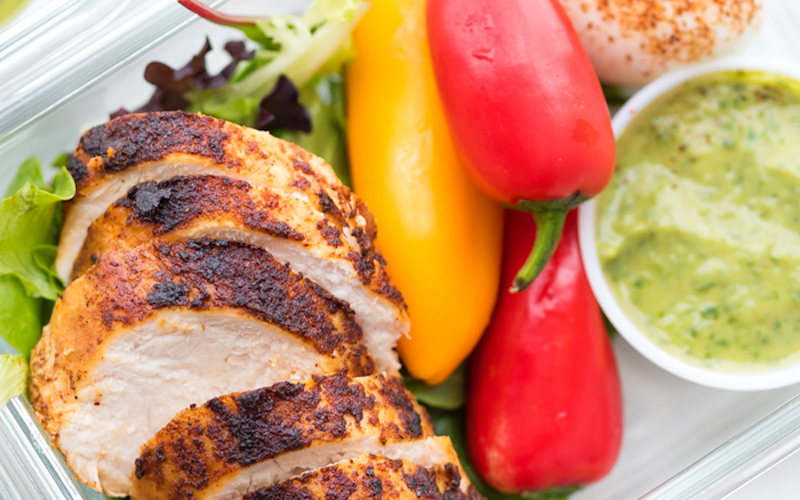 30 Recipes to Help Get You Through Your Whole30 Month >>