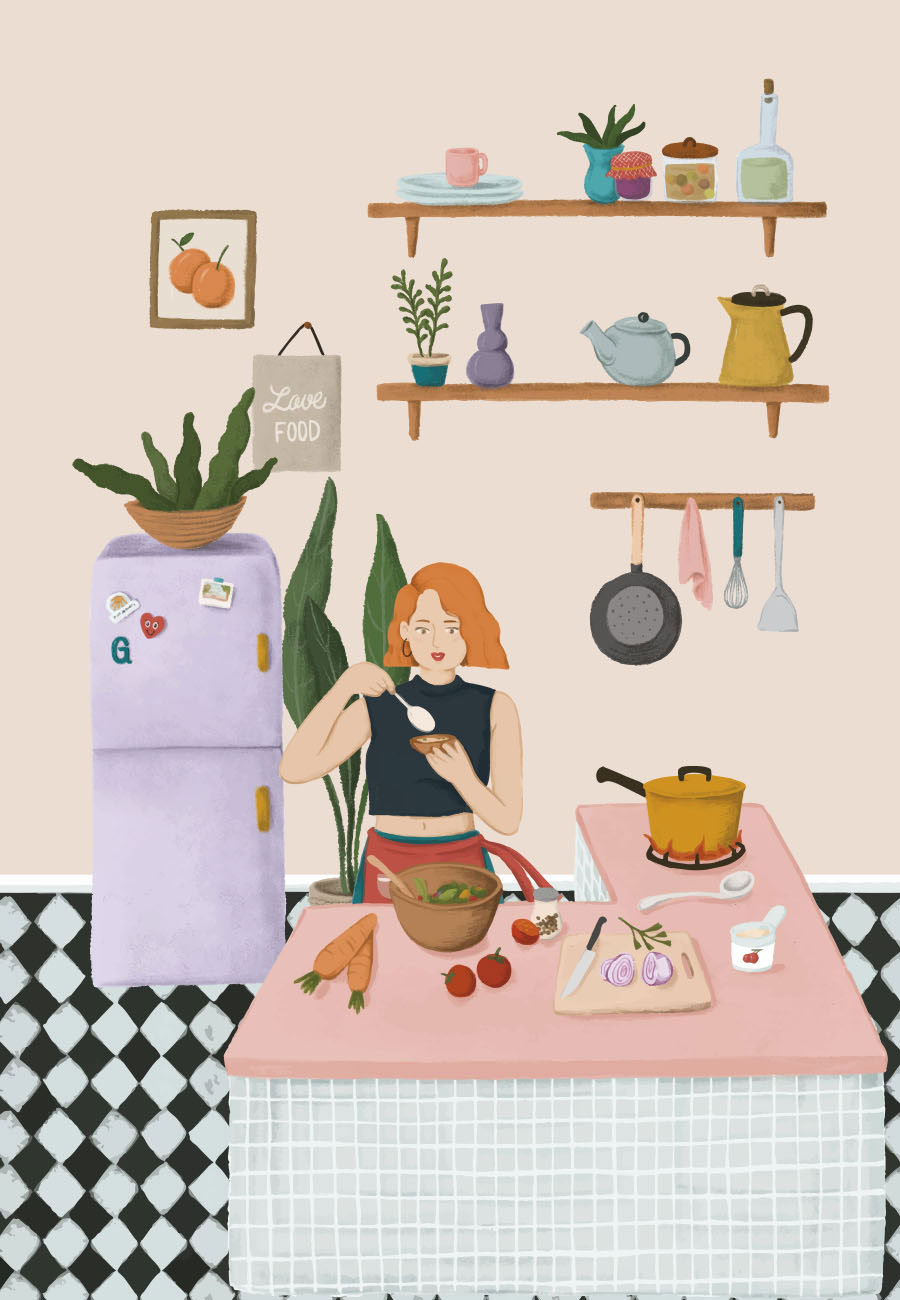 From a young age, I was led to believe that there were only two types of food: those that were “good” and those I understood as “bad.” The latter category was made up of foods that I, as an 8-year-old, had thought were the epitome of true bliss: ice cream, pizza, candy, gummy snacks, and fries.

On the opposite end of the spectrum were the foods that I did allow myself: Special K, skim milk, vegetables, 90-calories yogurts, and low-fat frozen yogurt (yep, this was the early 2000s). I began to associate these foods with virtue, believing that I was virtuous for eating them. With that, I developed the belief that to receive approval, I had to let these rules I’d created for myself (but which in hindsight, were created by the diet industry), guide every decision I made around food.

This early introduction into dieting led to experimentation with a string of other eating plans—Whole30, keto, intermittent fasting, South Beach Diet (throwback, right?), the list goes on. But coupled with a history of eating disorders, these attempts to cobble together some semblance of healthy eating were problematic to say the least.

In 2020 (new decade, new mindset), I’ve decided to throw away these past notions of how I should eat. In fact, I’m choosing to no longer be influenced by external motivators and am instead committing to my present self—body, spirit, and mind.

I’m doing this by listening to, communicating with, and honoring my body’s needs. A key element of this is practicing intuitive eating. Here’s what I’ve learned from incorporating intuitive eating into my life, and why I’m never going back to dieting.

The term was introduced by Evelyn Tribole, RD, and Elyse Resch, RDN back in the 1990s, according to Health. There are 10 principles that guide the concept, and at the center of intuitive eating is the idea of trust—trusting your body’s inner signals to tell you when you’re hungry and believing your body when it’s satisfied.

In the past, I dove into diets and wellness trends seeking control, believing that in a chaotic world, my eating habits—and as a result, my body—were something I could manipulate. I became obsessed with serving sizes, measuring my food so that I knew exactly how many calories I was putting into my mouth. This silenced my body’s cues, as I relied more heavily upon numbers and percentages than what I could learn from listening to my body.

Intuitive eating is silencing this noise, and a rebellion against what diet culture has tried to convince us is the truth. Intuitive eating is releasing the need for an artificial structure to guide how you eat, and instead letting your body’s wisdom lead the way.

Mindfulness Is A Game-Changer

Among the many wellness buzzwords crowding the internet today, mindfulness might top the list. For me, mindfulness is about bringing intention and awareness to things I do each day, and eating is just one of the many things that has benefited from the practice.

While intuitive eating and mindful eating are different practices, incorporating them concurrently into how I eat has helped me develop a healthier practice surrounding my thoughts and approach to eating. While intuitive eating asks you to separate yourself from diet culture’s rules, mindful eating is more about giving yourself space to focus on the present moment—and the present meal—in front of you.

A big part of letting my intuition guide my eating has been allowing mealtime to be a mindful moment dedicated to tapping into my senses. Instead of counting the fries I’ve eaten or making sure that I leave at least half of my plate unfinished, I’ve started deliberately taking note of the flavors and textures I’m consuming and whatever visual or auditory experiences I’m having throughout the meal.

Just as intuitive eating has helped me release the subjective value I used to give to food, mindful eating has helped me separate my emotions from my meals. I’ve learned to pause before eating, take stock of my headspace, and ask myself if I’m eating to fill a physical or emotional need. This has helped me let go of the value statements I used to place on food and myself (i.e., I ate something bad therefore I’m bad), and has allowed eating to become a way to satisfy my hunger instead of using it to cope with my emotions.

I Learned To Say Goodbye To Guilt And Shame

I used to get bogged down with immense amounts of guilt and shame after having eaten a “bad” food or bingeing after days of extreme restriction. Guilt used to be my default response to eating ice cream after dinner, or sampling a freshly-baked cookie from the cooling rack. While I used to believe that berating myself for this supposed bad behavior would change my habits, I’ve now replaced these responses with acceptance, kindness, and love.

Being gentle with yourself is a more productive and sustainable way of moving forward. In the past, I would get caught up in a negative thought spiral, which would lead to a cycle of this behavior. But just as negative self-talk begets more negativity, I’ve found that flipping the script and changing to more positive language or affirmations leaves room for more self-love to come into your life. Say it with me: “I can move past this uncomfortable experience by being kind to myself.”

I Listened To My Fear, Learned From My Fear, Then Released My Fear

To someone with a history of eating disorders, the idea of intuitive eating was laced with fear. When I was younger, the exchange between restricting and bingeing ran through a nearly constant cycle. I was afraid to be left alone in situations where I had access to food, terrified that once I’d start eating, I wouldn’t be able to stop. When I first learned that crucial to the philosophy of intuitive eating was letting myself eat whatever I wanted, I imagined slipping back into bingeing.

But then I listened to myself, giving space for these fears to express themselves. Through therapy and deep internal work, I’ve learned that much of my bingeing was done out of the feeling of deprivation that came from restricting my eating. I didn’t know when I would eat next, so when food was available to me, I felt an intense desire to eat as much and as quickly as I could. With this clarity behind my behavior, I was able to separate myself from my fear and trust that I could move past it. Fear used to immobilize me, but through acceptance and understanding, I’ve come to a place where I can heal.

Health Is More Than What I Weigh

I used to believe that to be thin was to be healthy, but after experiencing the fatigue, stress, and anxiety that came with shifting in and out of countless diets, I realized how far this was from the truth.

The principles of intuitive eating agree: Tribole, one of the dietitians who coined the term, began to depart from the practice of using weight as a primary factor in dietary health and started to prioritize other ways of measuring a person’s well-being.

When I learned this, an epiphany washed over me and I felt this shift in perspective change everything. Not only do I no longer weigh myself every day (or own a scale for that matter), but I’ve also learned to look at myself differently. I was once blinded by what I thought were the parts of my body that needed fixing, but now I can look at myself and admire my joy, my kindness, my intelligence, and my humor.

This has also helped me care for myself differently (and admittedly, better). While there was a time when I was the girl who logged miles on the treadmill to counteract what she’d eaten for lunch, I’m now the woman who sees the psychological and physical benefits of rest and more restorative forms of exercise. My self-care toolkit includes yoga, breathwork, walking, biking, and barre classes—not because of how many calories each of these burn, but because it makes me smile to put effort into the things I love.

Intuitive Eating Has Allowed Me To Live My Life More Fully

As someone who loves food—reading recipes, grocery shopping, cooking, going to new restaurants—it’s something that’s often on my mind. But what I realized was that this interest used to spiraled into obsession, and food would become the center of my life.

Since I’ve begun eating intuitively, my interest in food has shifted from compulsion to hobby. I’ve learned not to let it define me, and as a result, food has had less influence over my life. While I still love making meals with my boyfriend, hosting the occasional dinner party, and perusing the cookbook section of Powell’s, I’ve placed food on the back-burner, dedicating more time to friends, hobbies, learning opportunities, and other things that were once swallowed up by my obsession.

Eating intuitively has helped me give food a healthier role in my life. Sometimes, it’s solely fuel, while at other times it can be the connective tissue that brings people together. But food is never inherently good, and it’s never innately bad.

Because let’s be real: while our dietary practices are an important factor in our health, there’s so much more to us than how we eat.