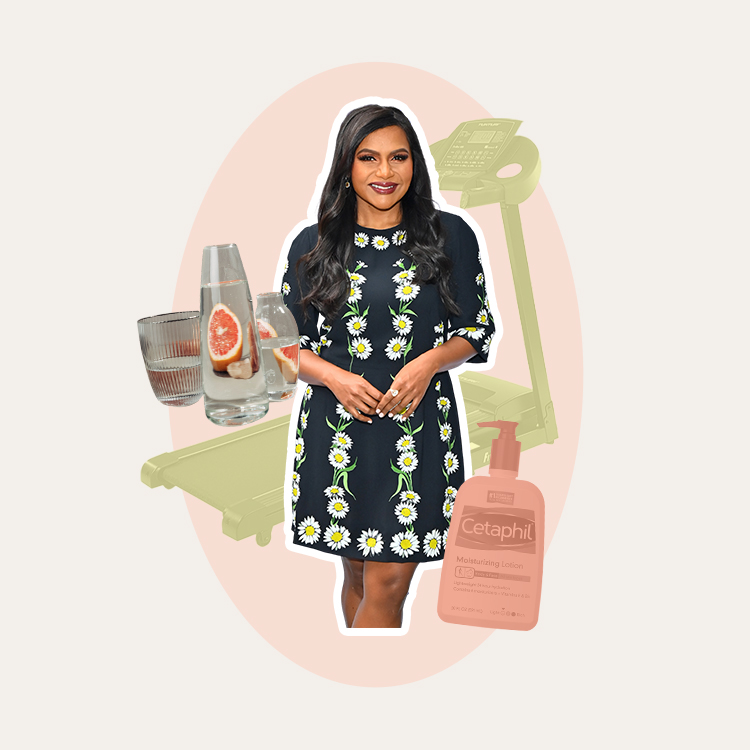 You probably know her best as the pop culture-obsessed Kelly Kapoor in The Office or the hopeless romantic Mindy in her eponymous hit show The Mindy Project, but what you might not know is that Mindy Kaling was born Vera Mindy Chokalingam and was the sole female writer for the first season of The Office. And ICYWW what she’s been up to since her days at Dunder Mifflin, she’s been hard at work building a media empire with her very own production company, shows Never Have I Ever and The Sex Lives of College Girls, three books, and co-writing Legally Blonde 3—all while maintaining her infectious smile, raising two kids as a single mom, and keeping up her wellness routine. So what’s her secret to juggling it all? After getting to know Mindy through countless interviews (seriously, ask me anything about her), I uncovered seven values she lives by. Hint: They only further prove the point that she’s the BFF everyone wants to have.

Work out because it makes you feel good

If there was one takeaway I got from reading up on Mindy and her workout regimen, it’s that her MO is focusing on movement that brings her joy. Whether that’s Pilates or PLATEFIT (think: lunges, dips, planks on a vibrating device), she’s a self-proclaimed group fitness junkie who is first in line to try the latest “it” workout. But her tried-and-true forms of exercise? Running on the tread, stretching, and walking. “Surprising the body with lots of different things I think is really good, particularly for my body… I’ve really been mixing it up and knowing that if a workout doesn’t necessarily make me soak my clothes with sweat, that it still was a good workout… It does not have to be punishing,” Mindy told People. “The endorphins that I get from working out centers me. I’m kind of an anxious person and it makes me feel centered and makes me more focused. And I have some of my best creative ideas when I’m working out.” I think we can all agree on that.

It wasn’t always sunshine and rainbows when it came to Mindy’s relationship with her body and exercise though. Because she didn’t fit the mold of what a “healthy” body should look like, she put herself through grueling workouts and hid her enthusiasm for being active. “I used to look at fitness as, like, It’s not successful unless you look a certain way at the end of it, and I’m never going to look a certain way,” she said in an interview with Byrdie. “I used to think there was no point if I wasn’t running for 45 minutes five times a week and then doing an hour of lifting. But, the point is that I feel so much better mentally if I’m in better cardiovascular health.” The moral of the story? Any sort of movement gets a gold star, and the best form of exercise is the one that you find the most fun and will stick with.

Drink up first thing in the morning

When it comes to hydration goals, Mindy is queen. In her interview with Byrdie, she said she drinks an “enormous amount of water with lemon” as soon as she gets up. She admittedly does it against her will but keeps up the ritual every morning as a pick-me-up (she doesn’t drink caffeine). And her H2O routine continues with 100 ounces of water throughout the day (if math isn’t your strong suit, like me, that’s equal to 12.5 cups).

Since coffee and matcha are off the table, Mindy also reaches for a green smoothie, created by celeb nutritionist Kimberly Snyder, in the AM. Mindy’s take on it, or her so-called “cheaty version,” calls for lemon, apple, romaine, celery, spinach, banana, frozen pineapples, and coconut water. Mindy told Marie Claire that regardless of what she eats the rest of the day, she knows she got in a healthy dose of fruits and veggies to start her day.

Keep your skin in check

There’s no denying that we at The Everygirl dig a good drugstore find, and Mindy is no different. She keeps Cetaphil in her skincare arsenal to cleanse her oily and acne-prone skin (who would have thought?). Chalking her good skin up to not wearing makeup every day, Mindy shared that she feels the most confident with just foundation, strong liner, lots of mascara, and blush. Her favorite part of her whole low-key process? Washing off a day of makeup. “I find it very meditative to take it all off. It feels like self-care,” she told WhoWhatWear. As someone who takes her bra and “face” off as soon as I get home, I totally feel her.

Her face-washing habit, walks, a solid bubble bath, and Selling Sunset are just a few things Mindy calls self-care. “I used to be very conscious of the term self-care because I was worried it seemed self-indulgent,” she says. “But in the last couple of years, I’ve started to really embrace it. It doesn’t have to be a big thing, and it’s really the simplest things that have such a unique power to elevate your mood,” she elaborated to Real Simple.

With the little downtime Mindy has, you might also find her in the kitchen whipping up and sharing a meal of coconut curries with vegetables with her loved ones. And the long-time foodie in her will take her me-time in the form of having dinner out with friends any day. But the foundation of self-care for Mindy comes down to a few small and ordinary hacks she let us in on in her interview with Forbes: hitting the hay at 10 p.m., leaving her phone in another room when she goes to bed, preventing the endless scrolling on IG, getting quality shut-eye, and taking her probiotic. Because sometimes keeping it simple is best.

There’s no denying Mindy works hard to get what she wants, but even A-list celebs like her use manifestation to set goals. Mindy’s go-to practice? Vision boards. At first skeptical of their efficacy, she now considers them “a nice mix of creativity and reflection.”

In her one-on-one with Vogue, she explained her experience creating vision boards: “…in the last month of the year, three of the things I had put on there came true—and they were three big ones—and I remember thinking, ‘Oh my gosh, it was that damn vision board.’ I just had to be patient. And I thought that was a really good lesson because when you put up a vision board it’s not like asking Santa for things. So one of the things I have on the new one is patience, because last time, I took it down. This year, I’m going to try not to do that.” Excuse me while I go gather all of my magazines and make a trip to Office Depot.

In the same vein, Mindy swears by practicing gratitude to put her in the right headspace. On any given morning, you’ll find her sitting cross-legged, saying what she’s thankful for aloud. “There’s something about having to say it that makes it really real,” she expressed.

Mindy doesn’t let not looking a certain way stand in the way of her love of style and getting dressed up. One quick scroll through Mindy’s IG and you’ll see it’s a collage of colorful, lust-worthy dresses and matching sets. Rather than being confined by societal pressures, she embraces self-awareness and body positivity (you go, girl!). “I’ve always steered away from light-colored jeans or white denim because I’ve never felt comfortable wearing light colors on the bottom half of my body, I think a lot of women feel this way. I’ve decided to make the commitment that when it gets to the dead of summer, I’m going to wear white jeans,” she told Forbes.

Like for most of us, body acceptance hasn’t come easily or naturally for Mindy. She confessed to Shape that she once held herself to restrictive eating habits the weeks before award shows and fashion events but has since bid them adieu. “I love to eat at restaurants, I love to eat home cooking, and I don’t like restricting my diet. And [now] I’m like, as long as I’m getting enough nutrients and feeling like my heart and my lungs are really getting exercise, I don’t really beat myself up about that.” Mic drop.

Mindy has made a name for herself as a multi-hyphenate and bringing fictional characters to life on screen. But off-screen, she stays true to herself and makes it a point to bring her most authentic self forward. Case in point: Her snapshots of being a mom and laugh-out-loud memes on IG. In her recent exclusive with People, she articulated how she keeps it real while still striving to grow: “There’s this Maya Angelou quote that’s like, ‘Do the best you can until you know better. Then when you know better, do better.’ So to me, that’s what I’ve just been doing.”

When Mindy spoke to Byrdie, she recalled feeling repressed and uncomfortable in her own skin as a young adult, a far cry from the mindset of the actresses on her two shows Never Have I Ever and The Sex Lives of College Girls. “Every day, I am struck by how brave and authentic the young women I’m working with are… They are courageous activists and not ashamed of being that way. They love their bodies, and they’re still quirky.” Taking a cue from Mindy and her counterparts, why not be your unique, beautiful self? There’s no one else like you—flaws, insecurities, and all. When you find yourself lost or lacking self-confidence, remember the piece of advice Mindy’s late mother left her: “Always be your own best friend.” 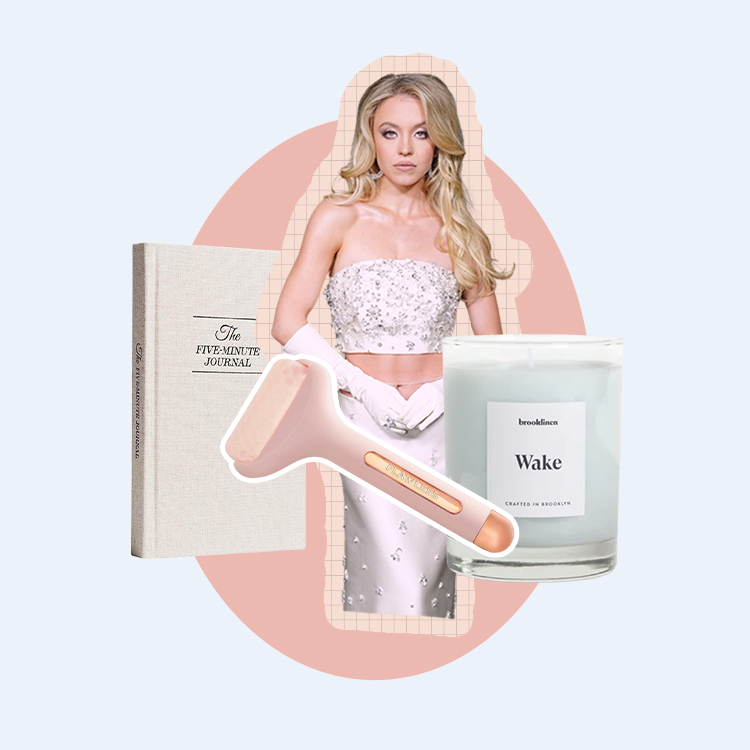