I’ve loved dressing up and trying new styles of clothing ever since I was a little girl. For as long as I can remember, my sisters and I would spend hours rummaging through our mom’s closet, dressing up (even in her traditional clothing) and walking our imaginary runaways, cheering each other on.

I am a Muslim, and when I decided to wear the hijab, one of the very first challenges I knew I was going to face was finding my style that incorporated modesty, one of the religious requirements that comes with putting on the hijab. That included wearing clothing with long sleeves, full pants, and that were loose and opaque. It was so hard to find clothing that checked all the boxes and still looked chic at the same time. I started to hate summer because I could not find any tops that were light and breathable. My love affair with fashion quickly began to grow complicated.

With the rise of social media in just the last decade, it started to get easier. I got Instagram, and decided to follow a bunch of Muslim women bloggers and influencers who faced the same fashion challenges I did. I became inspired, and slowly, my own sense of style evolved. It was not as hard to find modest clothing anymore, and I found that I preferred that neutral, simple, effortless look. 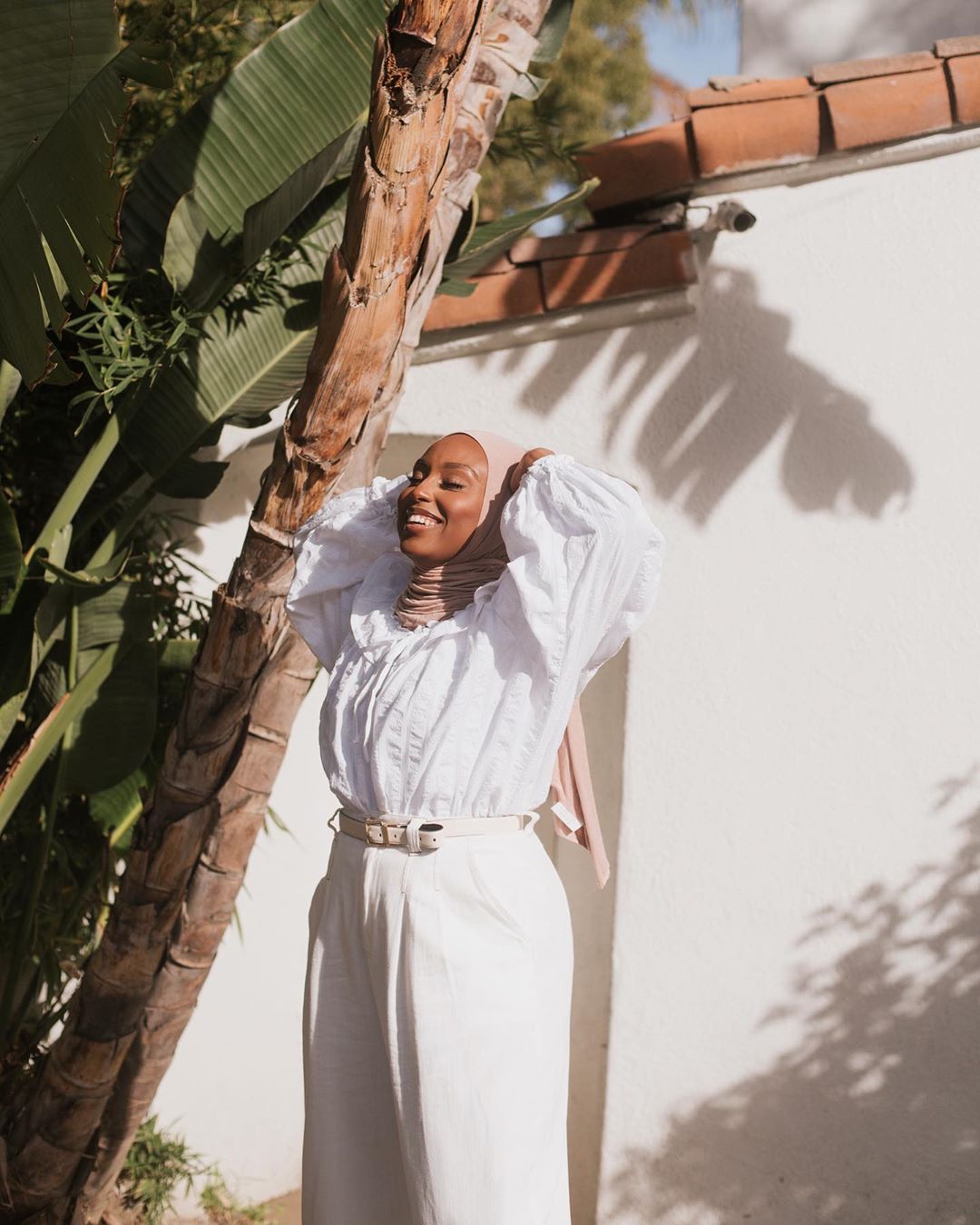 As Instagram and other social media platforms began to ascend, so did many visible, Muslim women fashion bloggers. After many years of not being visible in mainstream media, Muslim women are now receiving more recognition on various social media platforms such as Instagram, and on the runway, through what the fashion world is calling the “Modest Wear Movement” or “Modest Fashion Movement.” It really grew as Muslim bloggers offered examples of fashionable, yet modest clothing—without sacrificing religious guidelines and personal beliefs to their followers.

What is modest fashion? Basically, it’s clothes that cover most of the body, without sacrificing style.

What makes clothing modest is subtle; the differences are usually higher necklines, longer sleeves, and looser fits made from opaque fabrics and textiles. To some, that might sound “blahhhh,” “bland.” and “boring,”  but as someone who dresses modestly myself, I assure you, it’s most definitely not! The array of modest fashion includes maxi dresses, long skirts, and kimonos. Modest fashion pieces I personally own can be considered timeless—wide-leg black dress pants, long-sleeved white button downs with a longer hemline, and neutral overcoats that are super easy to throw over something that might be more fitted. Modest fashion has unintentionally become a modern day fashion trend in its own right. For a long time, tight clothing has been in power in the fashion world, but the trend nowadays is to go loose. Designer labels like Gucci, Balenciaga, and Chloe also seem to be attracted to that modest look, and are showcased in a lot of their collections with the tunics, dresses, and big coats. Major retailers like Zara, Uniqlo, and H&M have also started exploring this trend, making clothes that cover most parts of the body but still experiment with the latest fashion trends.

Modest fashion has unintentionally become a modern day fashion trend in its own right. 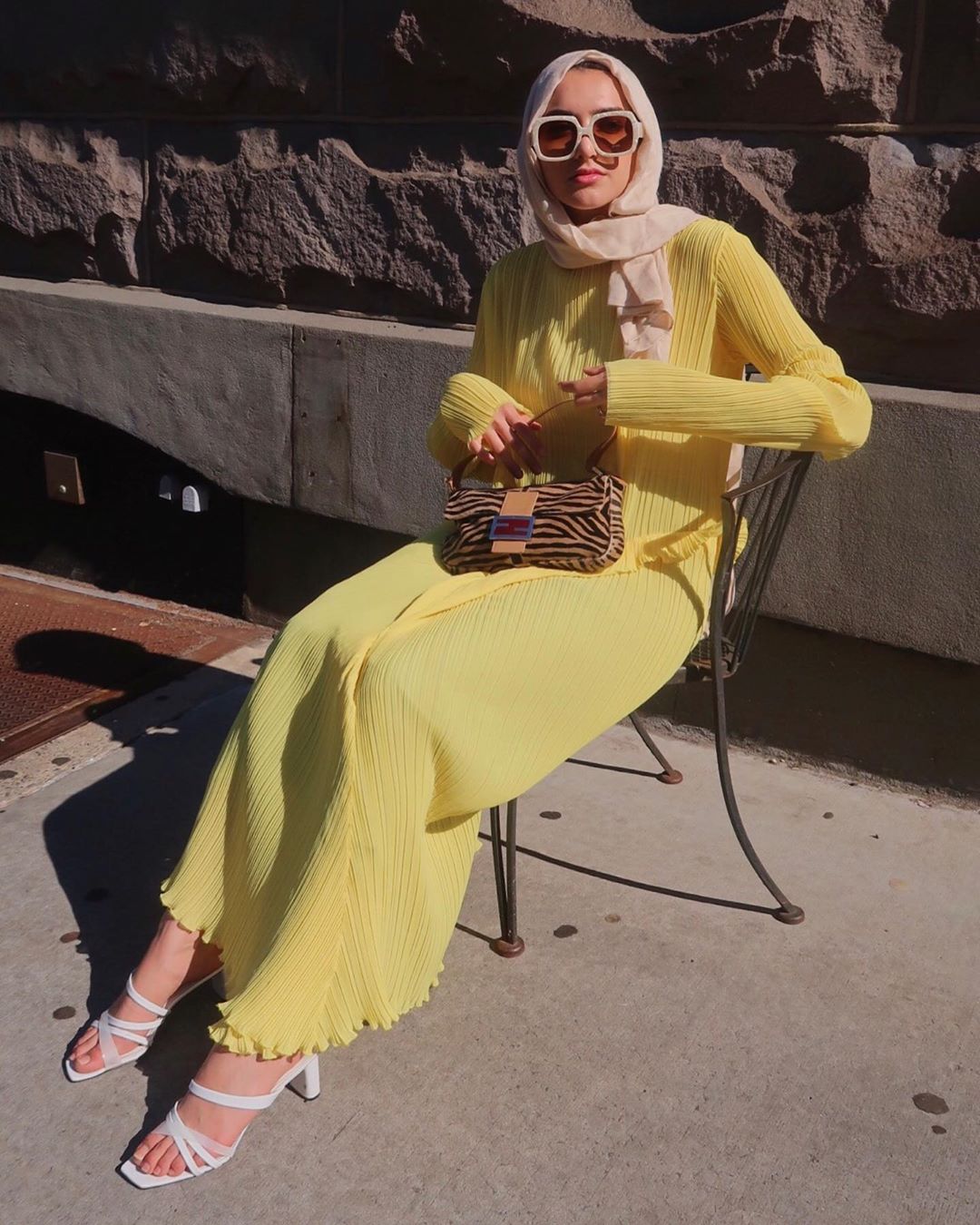 The modest fashion industry—and yes, it really is an industry—has boomed over the last few years. According to Vice, The State of the Global Islamic Economy Report, Muslims spent approximately $270 billion on fashion in 2017. The growth of this industry is driven by many factors. Amongst those factors include the fact that there are almost two billion Muslims in the world today, according to Pew Research, and that number is projected to  be three billion by 2060. In recent years, the fashion industry has also shifted; it has become more inclusive and diverse, satisfying needs for people from various cultures and backgrounds. Another major factor is the rise of Muslim women fashion bloggers and influencers on social media, who are also becoming designers, to show their life and sense of style to their followers, mostly consisting of Muslim women. That includes British, Canadian, and American famous fashion bloggers who are now designers, such as Nour Kaiss.

Modest fashion for Muslim women is not just a short-lived fad; it is a need because it is something that is embedded in our mindset and beliefs that will remain with us for life. Fashion designers and retail companies recognize that and acknowledge the incredible niche there, and are creating collections that cater to those needs. Stores such as H&M, Banana Republic, and Macy’s have designed modest clothing and headscarves and have hired visibly Muslim women to model their lines. Mango has also released collections of tunics, kaftans, and long sleeved maxi-dresses that are modest-friendly. In 2017, Nike successfully released a sports-friendly, high-performance hijab for its female Muslim consumers. Some luxury brands have also released some of their own modest collections, such as Dolce & Gabana debuting a line of hijabs and abayas, and Oscar de la Renta designing a capsule collection for the month of Ramadan.

Modest fashion for Muslim women is not just a short-lived fad; it is a need because it is something that is embedded in our mindset and beliefs that will remain with us for life. 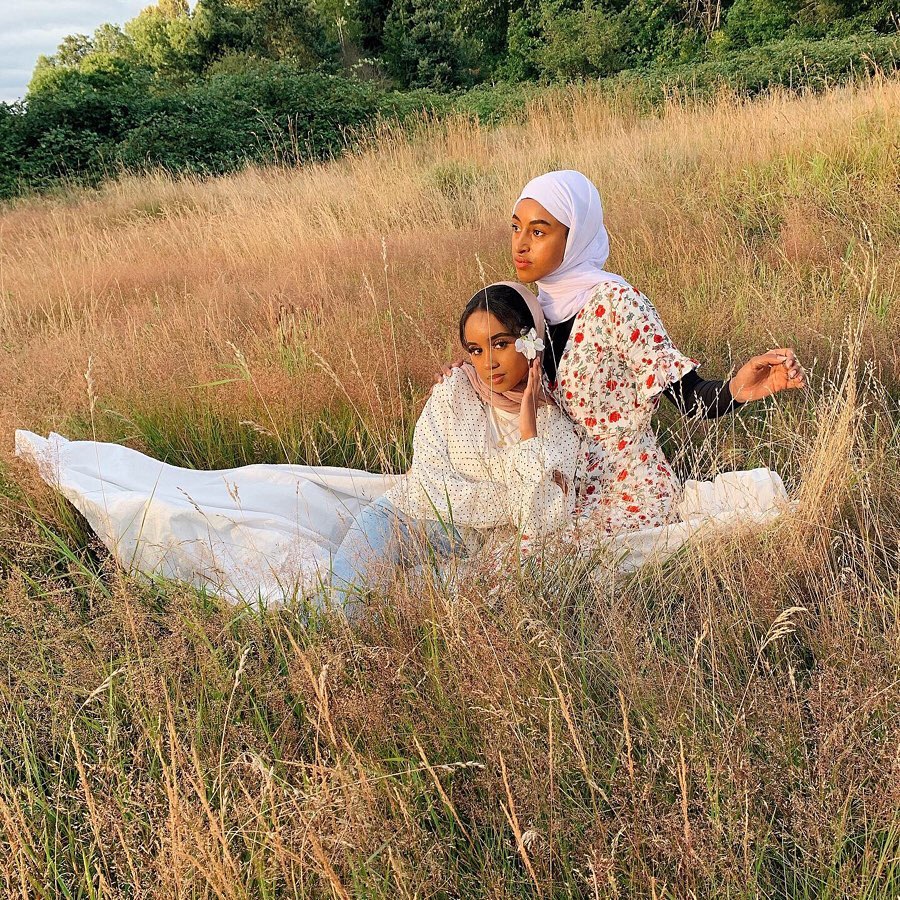 Hijabi supermodels such as Ikram Abdi Omar and Halima Aden, have also been making headlines like walking the catwalk for runway shows, and posing on the covers of famous magazines, such as Sports Illustrated. The demand and the appetite for modest fashion is so huge now that in 2017, Istanbul hosted its first Modest Fashion Week, where luxury and contemporary fashion brands have the opportunity to feature their brands.

Although the modest fashion industry has focused on Muslim women, it actually extends to women of different faiths, such as Christianity, who opt for modest clothing. Modest fashion is for people who just choose to show less. It is also for people who just prefer the “relaxed” or the “oversized look.” Sometimes, people just want modest clothing for reasons that could be as simple as comfort. Modest fashion is offering us those cocoon coats, the midi and long skirts, and the oversized blazers. It’s even the long coats, high-waisted wide pants as well, and blouses with puffy sleeves. You might think you don’t relate, but the boyfriend shirts and jeans, the slouchy sweater and the oversized cardigans you wear? All modest fashion looks! Modest fashion is extremely versatile, functional, easy to style, and most importantly, comfortable. So really, what’s not to love?

You might think you don’t relate, but the boyfriend shirts and jeans, the slouchy sweater and the oversized cardigans you wear? All modest fashion looks! 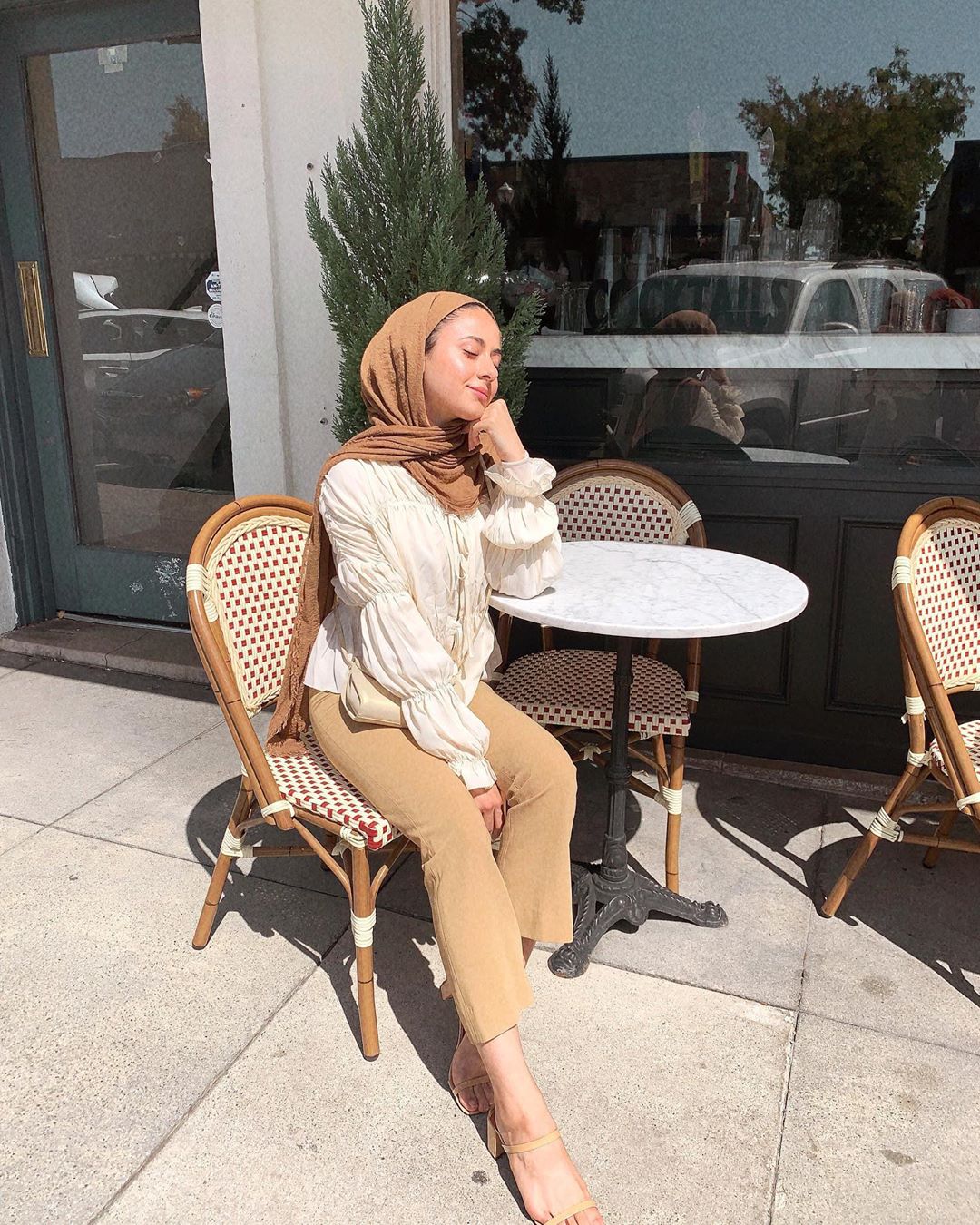 I know religious motivation to dress modestly sounds old-fashioned and archaic, but the modest fashion that has evolved in response is not. Sometimes, I can’t believe how much the fashion world has changed. I remember when I decided against going to a wedding a few years ago because I couldn’t find a dress that was cute or appropriate enough despite searching for weeks. Now, I’m in total awe that finding something to wear for any occasion is so easy, in store or just a click away online! I’m happy that I was part of the generation that actually witnessed the “Modest Wear Movement” and totally got to reap its benefits. As a visible, modern Muslim woman, one of my main goals in life is to incorporate my religious beliefs into the way I live, which has been mostly a Western upbringing. That also includes the way I dress.

Adopting modest fashion is so much more than being a Muslim. It is not something that belongs to one particular group of people, and is open to anyone. It’s an inclusive trend seen from the street to the runaway, and it’s here to stay. It is a style that resonates with a lot of people, regardless of religious or cultural background. Modest fashion means something different for everyone, and cannot possibly be encompassed in just two words. But for me, modest fashion is what I show, what I don’t show, and how I do that while never compromising my sense of style or beliefs.