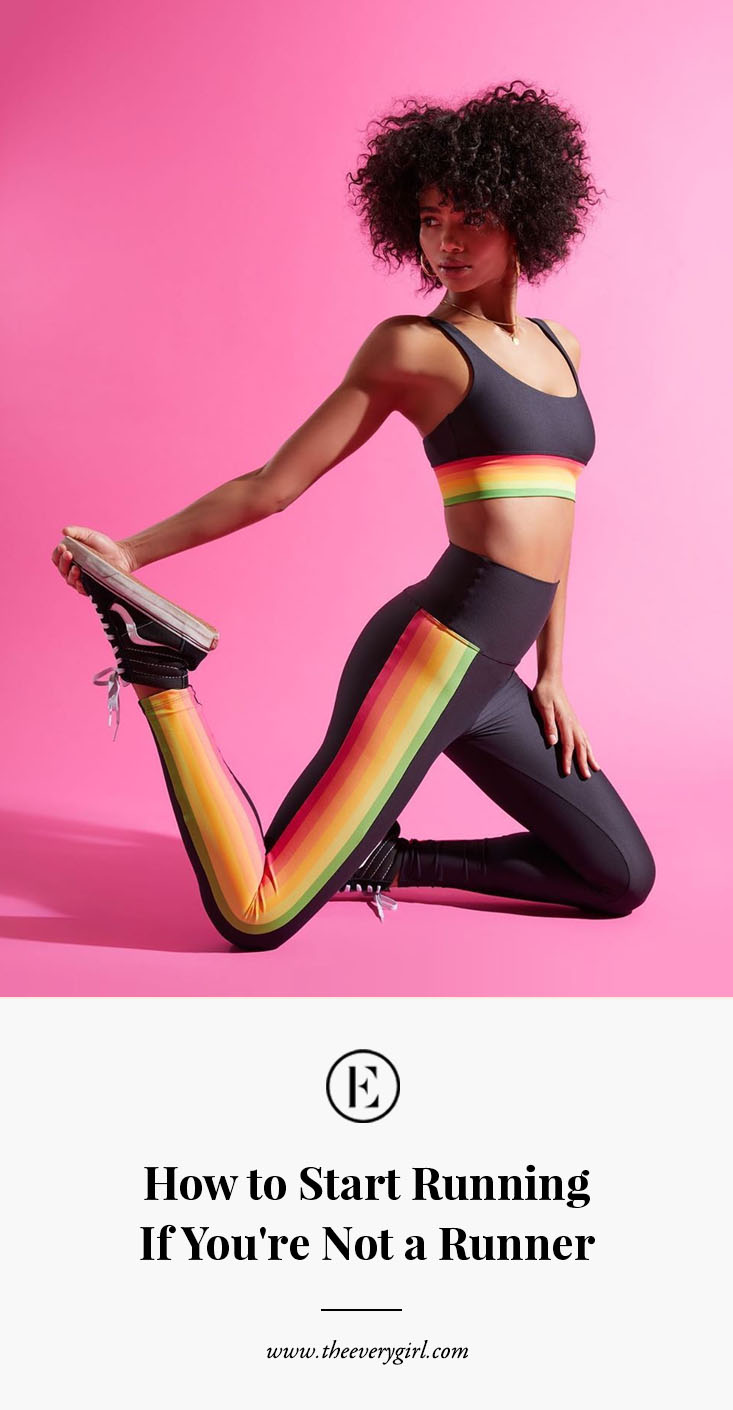 With gyms around the world closed and living room workouts starting to feel uninspiring as summer weather strikes, there’s one incredibly simple option when it comes to a way to move your body: running. Now, I was not running’s biggest fan a few years ago. True story: I once feigned a fainting spell one lap into the mile run that we were forced to do in high school gym class, so strong was my commitment to inactivity. Because let’s be honest, until you’ve done it for a while, running just plain sucks. Or rather, running can suck if you attempt to do it the way most of us do, by calling to mind a Rocky-esque vision of yourself effortlessly gliding down the road, only to be stymied by a wicked cramp and burning lungs after 30 seconds.

But if you can step back and build into a running habit in a gentle, thoughtful way, it will get easier. Here’s what (finally) worked for this non-runner:

Figure out your ‘why’

Cliche, yes. But have you ever directly applied this concept to your running? It could be as simple as ‘I used to love running cross-country in school and I miss it,’ it could be as goal-oriented as ‘I would love the satisfaction of being able to run a marathon,’ or it could be more health-oriented and based on figuring out a way to boost your mood or increase your productivity.

Don’t just think about it: actually write out the list, and if you’re truly a reluctant runner, stick it right near your running shoes so that you see it every time you lace up.

You don’t need expensive gear to get started running, but your thighs, boobs, and underarms will thank you if you pick the right outfit. This applies to every body type, especially on hot days. Your confidence will also be a bit higher if you feel like you’re properly dressed for the task at hand, rather than wearing your old Converse high tops and a regular wire bra on your first run, like this writer once did. But it’s not just about confidence: breast discomfort and pain during exercise thanks to bouncing is a common complaint among women, and thigh and underarm chafing can wreck a run faster than any shin splint. But it’s easy to prevent, if you pick the right clothing.

On top, any sports bra that doesn’t leave your boobs bouncing at the slightest upward movement will do the trick. If you’re someone who does suffer with underarm chafing issues, opt for a T-shirt or long-sleeve versus sleeveless for less skin-on-skin rubbing. High-waisted tights work as well as most sport-specific leggings, and as temps heat up, thank goodness bike shorts are having a fashion moment right now—when it comes to preventing thigh chafe, they can be lifesavers compared to short shorts. A pair of running shoes that fits your foot with enough space to wiggle your toes slightly is ideal in order to prevent blisters.

Start with a walk

That’s right, not a walk/run, just a walk. The goal here isn’t to improve aerobic capacity or boost mitochondria—it’s to develop the habit of getting outside and moving forward, one step at a time. Running is a weird exercise because for new runners, there isn’t an ‘easy’ version like there is for something like strength training, where you can pick a lighter weight. Even jogging feels like the worst at the beginning.

Enter: walking. Say you want to build to a point where four times a week, you run for 45 minutes. Start by setting aside those 45-minute blocks for walks. This helps you get used to exercising during these times, so before things start to actually feel hard, you’ll be committed and used to being outside. You may also find this is a good time to experiment: are you happier when you do your walk in the morning, or are you more excited about a dusk walk? This can help figure out your optimal workout time. Walk regularly for at least a couple of weeks to establish your pattern, and then think about adding some speed.

Once you’re in the walking habit, it’s time to start running a bit. But not all at once! Nearly every non-runner I know has started their running routine by heading out the door, doing a few fake stretches, and hitting the pavement at an unsustainably fast pace before limping back home minutes later, swearing off the sport for life. You’ll cover more ground and reap more benefits by starting with a run/walk.

As I’ve gotten a few women started with running, I’ve found that a good place to begin is with 10-30 seconds of running at a reasonable, non-sprinting pace for every minute spent walking, using an app like Interval Timer to keep you honest. Aim for around 30-45 minutes of this, and don’t give in to temptation to run more because you’re feeling good: the point is to feel good, and like it’s actually easy. Weekly, start to increase your running duration until you’re up to five minutes of running and one minute of walking. Then, start to decrease your walking time. There isn’t one exact formula for how much to walk or how much to run, just base it around what feels good and not too hard. After a few weeks, you’ll realize that you’ve tricked yourself into running for 45 minutes straight! 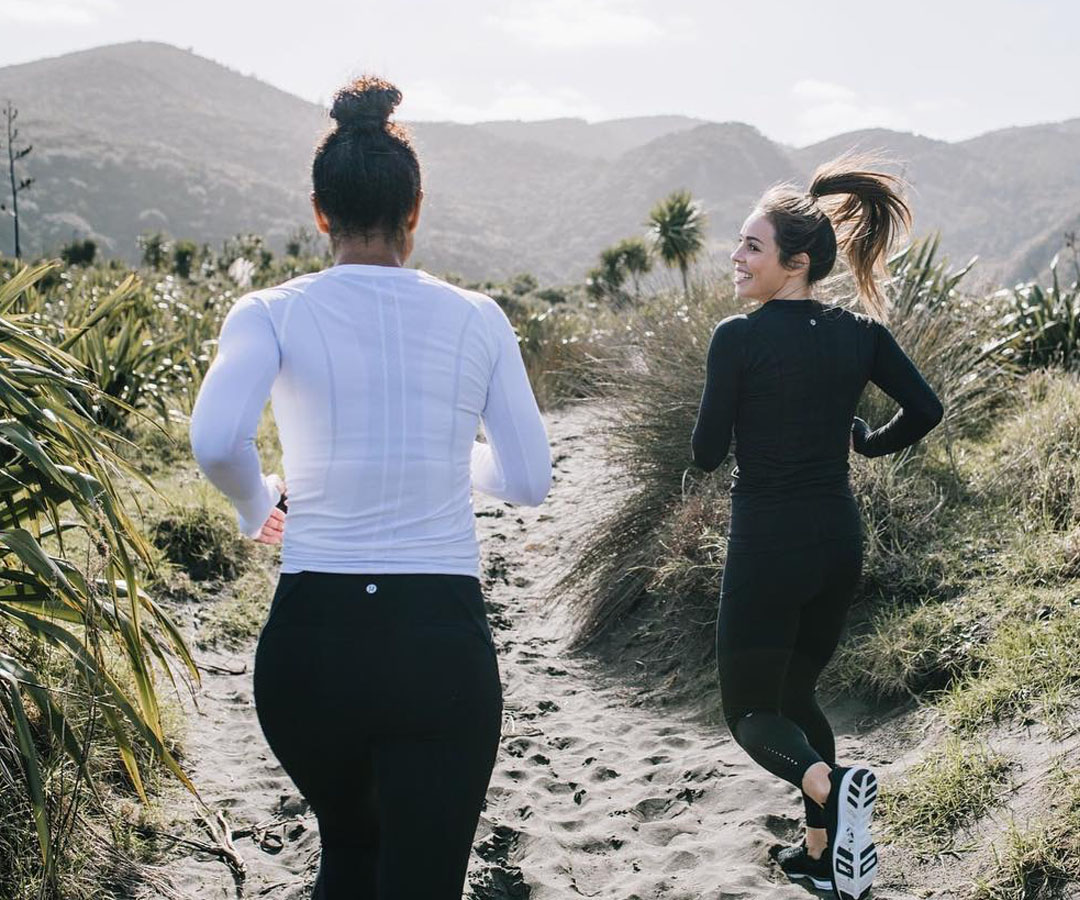 This might sound like it’s more advanced, but nausea, stomach cramps and diarrhea (AKA ‘runner’s trots’) are a fast recipe for quitting running after your first mile. (It was for me. Several times. No one wants their fastest sprint to be done heading for the nearest restroom.) Try to avoid eating a meal within two hours of your run, and if you’re hungry in the 15 minutes before you head out the door, have a light snack like a small piece of toast or half a banana with a few ounces of water. This will help avoid any disaster-pants/sprinting for the restroom/dramatically vomiting into bushes issues that you might have if you try to run too close to lunch. Lastly, if you’re like the 90 percent of runners who do have occasional gut trouble on the run, plan your route with restroom stops along the way.

Don’t feel obligated to run with others

Right now during the COVID-19 crisis, you might be forced to learn to run solo regardless of your preference. If you prefer the solitude and relaxation that comes with doing your runs solo, lean into that. You can turn your run into your daily mindfulness practice, use it to help you sort through a tricky problem at work, or just blast some music and get out all those emotions that you’ve been holding in. If you’re a social runner, that’s great—take advantage of bringing friends along for your runs. Just make sure you stay at a pace that works for you, rather than murdering yourself to keep up with your track star best friend.

You might not think you need to record your runs or log every mile, but being able to track your progress will help you stay motivated and accountable. There are a few great free apps for runners including MapMyRun and Strava that will log your runs on your smartphone so you can see your progress. There are also apps that help you get started with built-in training plans, including MapMyRun and the Nike Run Club app. If you prefer paper, simply start making a few run notes while bullet journaling. If you’re a goal-oriented person, this might be the step that finally makes you become a full-time runner.

A lot of new runners think that running every damn day is critical to ‘being a runner.’ But really, the gains you make come from when you take time for rest and recovery. Unless you’re training for the next Olympic cycle, running should be something you’re doing because you want to be healthier overall. To do that to your best abilities, you should be adding in some mobility work, like yoga, and resting enough to let your body actually recover from your efforts.

You’ll likely have a few false starts as you get going—I definitely did—but once you finally have a moment in a run where things start to click, that elusive feeling of a runner’s high kicks in, or you’re noticing that you’re feeling stronger and clearer in everyday life, you’ll want to keep the running habit going. Even once the gyms reopen.