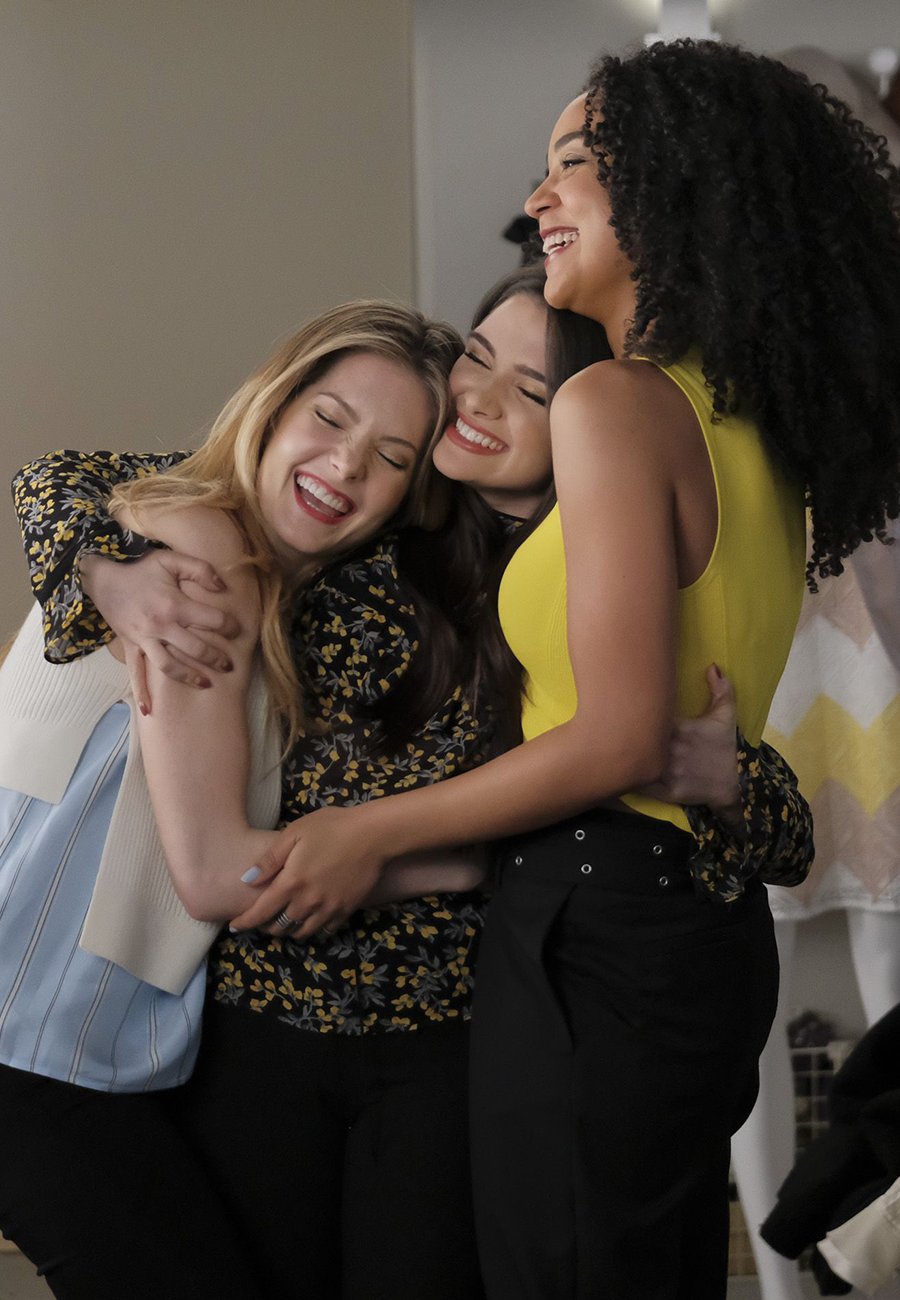 I watch so much TV that anyone who tracks me on Find My Friends or follows me on Fitbit is frequently worried I’m dead because I haven’t moved in so long. My life is fun! But honestly, I love TV and movies and watch it alllll… or at least, I used to when there was a manageable amount to consume. Here are a few of my favorites that usually fly under the radar. Because we all deserve our moment in the sun, amiright?

If you like Netflix romcoms (To All the Boys I’ve Loved Before, The Kissing Booth, Set It Up, Always Be My Maybe)…

aka something to watch in your PJs with a silly smile all over your face.

This is such a “throw it on while scrolling” movie and I LOVE IT FOR THAT. Sometimes you’ve watched How to Lose a Guy in 10 Days like 8 million times already and you just need something on in the background while you roll over your cheeks with a jade roller, ya feel? This movie also has a young Miles Teller (I know he’s rumored to be kind of a POS but he puts on a great showing here) and Analeigh Tipton of America’s Next Top Model/Crazy Stupid Love fame. What a cross section of my interests! HERE FOR IT.

If you’re new to Asian dramas, start with this one. The series follows Jan-di, a girl from humble origins who gets entangled with a group of boys from a wealthy school. It’s dishy, it’s delightful, and it’s a cult classic for a reason.

What a Girl Wants
Netflix

I cannot stress enough how much I adore this movie. I use to watch it on repeat at my Nana’s house until she had to be like “Kelly, I’m honestly concerned.” But y’all, I was undeterred because I think this might be one of the best movies I have ever seen and yes I’m saying that with a completely straight face why do you ask? All you need to know is that Colin Firth dances in leather pants in this movie. Watch it!

Once upon a time, I rented this movie at a Blockbuster. But let’s not hold that against it. It actually gives me all the feels about accepting yourself for who you are on the inside and the romance feels so realistic despite the fantastical elements of the story. A charming, blooming flower of a movie. Plus REESE.

This movie is the most WASPy, New England movie to ever exist except for The Talented Mr. Ripley obviously and okay, probably some others… THE POINT IS there is a rambling house on the water with peeling paint and antique portraits and it’s the next best thing to a trip to Cape Cod. This movie is romantic as hell but it’s also about falling apart and the wild maze that is female friendships sometimes and getting together with the old crew for one last hurrah. A perfect summer watch.

aka sprawling shows with tons of intrigue and people in rooms talking interspersed with HOLY SH*T moments.

I’ve talked about how much I love this show before and honestly the first two seasons (which just landed on Netflix a few days ago… did I magic that into existence??) are a work of feminist art. There is historical accuracy, there are corsets, there is a badass heroine putting the work in and saving herself on the daily, there is hot sex. I MEAN seriously why aren’t you watching this?!

OH HEY GEMMA CHAN. This show is wild. Basically Gemma Chan (my idol my hero) plays a nearly sentient, scarily lifelike, highly-developed robotic servant that is the must-have gadget in this dystopian-ish version of the future. As you may guess if you’ve seen any Sci-Fi show ever… this gets complicated.

I used to be so obsessed with this show that one time I missed an NHS meeting in high school to watch a new episode. Remember when shows just aired on TV and then you couldn’t see them for months and months until they came out in a DVD pack for $49.99? What a wild time that was. It’s a great binge because there are TONS of episodes and it’s procedural-ish so you won’t miss anything if you’re casually Instagram scrolling here and there.

Based on a comic book, Preacher is a series that follows Jesse Custer (our titular preacher) as he becomes imbued with powers and has a crisis of faith. There’s also a vampire. It’s hilarious and insane and so, so fun. Highly recommend.

aka witty series with a decent backlog and a delightful ensemble cast.

THERE ARE SO MANY JOKES IN THIS SHOW. Honestly you can’t look away because you’ll miss 85 references. The jokes are layered on top of other jokes and garnished with a sprinkle of even more jokes. It’s honestly so much fun to watch. Plus so many ~ fabulous ~ guest stars.

I love a dry, workplace comedy and this may be the driest of all of ’em. It makes me laugh so much and also reminisce about my time in the corporate world of red tape. A weekend binge for when you need to laugh while doing your laundry.

Another Australian show! They really know how to make me laugh ova there. The series follows Josh, an awkward 20-something (SAME) navigating realizing he’s gay and also dealing with his mother’s attempted suicide. Funny and charming and smile-inducing.

THIS CAST, GOOD HEAVENS. This is one of the best ensemble cast TV shows I’ve ever seen. It follows six out-of-work actors at their day job at a schmancy catering company. It’s ultra-bingeable and absolutely hilarious. You’re welcome.

aka lots of meaningful glances and hushed whispers.

Okay, so this show isn’t like The Sopranos or anything, but it’s a quick binge and it’ll remind you of being in high school and love triangles and that phase you went through where you were really into horses.

I will never stop in my crusade to get everyone I know to watch Being Erica. I discovered it freshman year of college and it was such a security blanket — a soapy Canadian show about what would happen if you could relieve your most embarrassing, important, life-changing, tragic moments. Lovely and realistic, it’s like the show version of putting on PJs fresh from the dryer.

EVERYONE should be watching The Bold Type. I’ve never seen a show manage to talk about such weighty subjects — abortion, gun control, sexual assault, immigration — in such a relatable, realistic, poignant way. Plus, great wardrobe and sexy love interests. YOU KNOW YOU WANT IT.

Surprise, you don’t need HBO to stream this absolute classic piece of filmmaking. It examines the horrors and bravery and sacrifice of war and it’s so, so well done. Highly recommend.

This show is based on a true story and it is absolutely WILD. It follows Jeremy Thorpe, a member of the British Parliament who was accused of conspiring to murder his lover, Norman Scott. It’s won several awards, including a Golden Globe, and traverses the dark, twisty nature of politics with a deft hand. Plus, Hugh Grant!

This is such a lovely rendering of a classic story — it’s feminist and searching and full of a characters who are richly-drawn, three-dimensional people. It’s a straight up delight from start to finish.

aka explosions of delight that you can sing along to.

Okay, I know in this movie Audrey Hepburn is like 22 and Fred Astaire is I want to say 55, but it’s still ‘S WONDERFUL, ‘S MARVELOUS and that’s a reference from the movie if you hadn’t already guessed.

I just realized you could watch this on Netflix and spent the most enjoyable afternoon bopping around to it while also doing self-care things like face masks and jade rollers. Based on the beloved musical about The Four Seasons and featuring a plethora of amazing costumes for your visual delight.

This show makes me SO HAPPY. It’s beautiful and fierce and vivacious and so, so, so delightful. A must-watch and thankfully now easily accessible through the beauty and wonder of Netflix.

aka you like laughing so hard you freak out cause you can’t breath for a second.

I’ve had the phrase “Silk Robes and Kimonos” stuck in my head for an entire week and I dare you not to after watching this special. It’s 30 minutes long and billed as a “visual poem” from the Lonely Island, who I always love no matter what they do (*ahem* Popstar Never Stop Stopping *ahem*). They are honest to goodness geniuses. TAKE MY MONEY jk this is a free special but you get the gist right.

My friend Caitlin recommended this special to me and it’s SO FREAKIN’ GOOD. It’s commentary on relationships and breakups and why you stay when you know you shouldn’t, featuring the infamous joke that ended an estimated 4,500 relationships. Honestly a must-watch that made me think as much as I laughed.

This series follows Ramy Hassan, a first-generation Egyptian-American who is battling with is identity, torn between his faith and wanting to do what most 20-somethings are doing — date, hang out with friends, experiment with drugs. As equally as poignant as it is hilarious.

aka you worship at the altar of Phoebe Waller-Bridge (honestly, same) and like creator-driven series or movies.

Written by Phoebe Waller-Bridge before Fleabag fame, this is an enjoyable little romp with lots of English accents and cooky situations. It’s not an A+, but it’s a definitive B- and it’s lovely to fall into those sometimes.

Such a loving movie about a young guy who moves back to his childhood home after a bad breakup to start caring for his sick mother. It’s a damn gem and not enough people have experienced it so here I am, practicing my one and only supposed superpower: forcing my joy upon others in the form of recommendations. Do you love me yet?

The writer’s room for this show is mostly female and all Latinx and you can tell in every lovingly crafted piece of this series — from the sex scenes to the female friendships to the way East Los Angeles is drawn. This is a show that would never have been made even 10 years ago and I love it for that — honest and refreshing and so worth a watch.