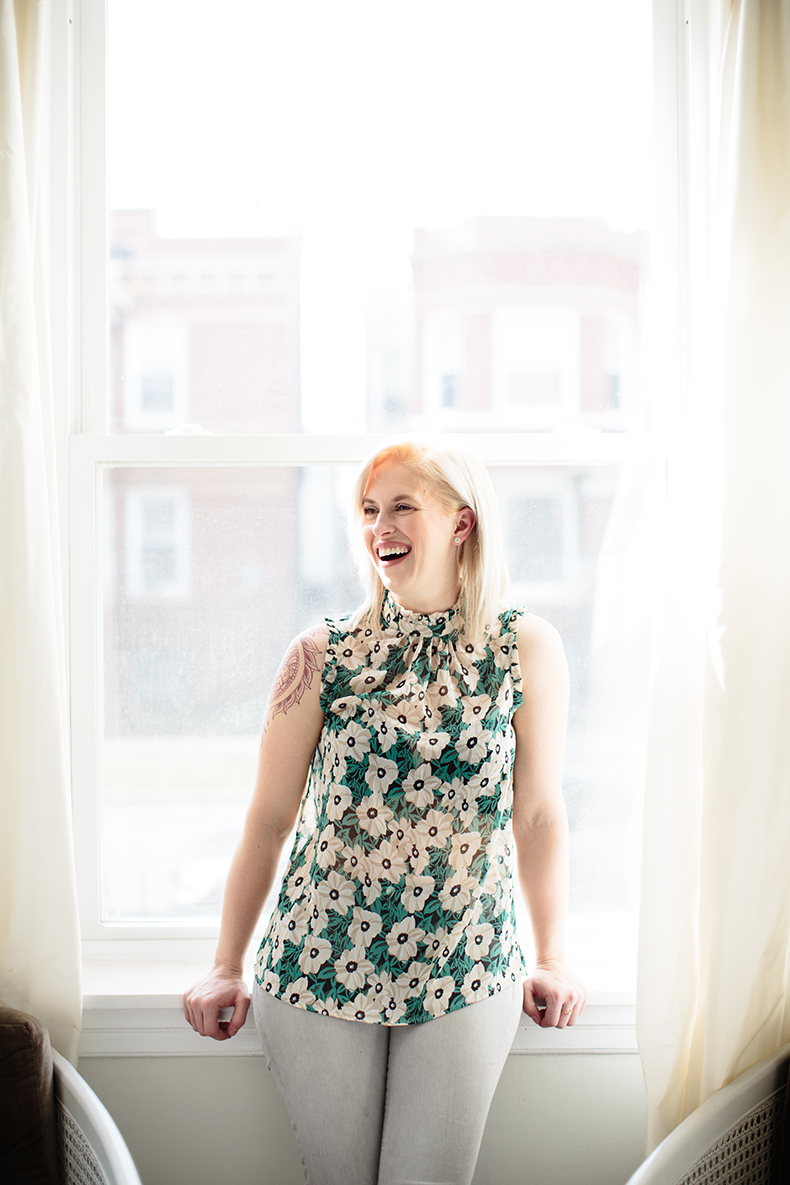 Hi, my name is Revae Schneider. I’m a 33-year-old small business owner living and working in Chicago. At 30 years old, I finally had the courage to acknowledge “Hey, uh, maybe I’m not so straight.”

I didn’t go to college. I didn’t get to have those years of being away from my parents and experimenting — or as it’s referred to among some of my friends, “gay until graduation” — and I was always extremely shy about the topics of relationships and sex.

I grew up in a conservative, upper-middle-class community just outside of Indianapolis, which is still one of the most conservative, Republican counties in the nation. My only real knowledge of anyone gay was the choir teacher, who lived with the dance teacher/choreographer in town, who was also a man. No one I went to school with was “out” at that time, even though there were 4,000 kids in the school and 1,000 kids in my graduating class alone. I also dealt with severe social anxiety as a teen, so in my head,  I was just too worried about not looking “cool” to even notice my true feelings. I do remember having crushes on girls while growing up, but I justified it by thinking I wanted them to think I was cool.

It took me a long time to dig myself out of that hole and give myself the freedom to listen to what I wanted versus what I thought I should be doing.

During high school, I did what I was “supposed” to do and dated guys. I ended up in a terrible situation with an abusive boyfriend, who repeatedly told me, “No one will ever love you like I will,” “You’re never going to be anything more than a housewife,” and “You’re never going to amount to anything so you should probably quit while you’re ahead.” As someone with severe social anxiety, who was already struggling with my identity and where I fit in, it really messed with my head. It took me a long time to dig myself out of that hole and give myself the freedom to listen to what I wanted versus what I thought I should be doing.

The first time I ever said anything about what I was feeling ended up being a pretty funny situation. I had just been laid off from my job in Miami and I replied to an ad on Craigslist for a retail position, which ended up being a position for the Kourtney and Khloe take Miami Dash retail store. I went through a lot of interviews with producers and at some point, someone asked me about my dating life. Caught off-guard, I just blurted it out. They were guys trying to get information for a semi-provocative show so, of course, their comments scared me half to death and I didn’t say much more about it. I didn’t get cast on the show. (Can you tell I’m super bummed? Kidding!)

Finally, at 30, it occurred to me that if I was meeting guys on an app, I could probably meet a girl on there too.

I never really acknowledged anything more for a few years, but remember getting hired through my company to do a cocktail class for a woman’s birthday. The party ended up being a group of lesbians. I didn’t know what to make of it at the time, but I sort of had an internal freakout. I remember thinking afterwards, “How do I meet a girl?” I didn’t realize there were girls who liked girls that were also really pretty, as crazy as that sounds. I think I was maybe 28 at the time. Being that I was fairly shy, I had never spoken a word about it, but I did wonder where one would go to meet girls. I figured Chicago’s Boystown was only for gay guys (wrong), and never got up the courage to try. I thought about moving to Andersonville, a more predominately lesbian area in Chicago, but finally at 30, it occurred to me that if I was meeting guys on an app, I could probably meet a girl on there too.

I distinctly remember calling my mom, who is also my best friend, on the way to my first date with a girl. We had our normal pleasantries and she asked me what I was up to for the weekend. “I have a date. It’s with a girl. Really not a big deal but thought I’d tell you.” I know my mom and didn’t really think twice about telling her, but couldn’t have asked for a better response: “What?! You are?! Is this a thing? Why didn’t you ever tell me this before?! That’s so great! Is it a first date?” She proceeded to pepper me with questions for the next 30 minutes, ultimately ending with her saying, “Whatever makes you happy, makes me happy. I love you!”

At the time, I had no idea the emotional roller coaster I was in for. I really fell hard and fast for the first girl I dated, but we were in different emotional places at the time, so it ended up just not working out. Around the same time, I was able to get into an intensive domestic violence therapy program, which turned the way I dated upside down. I, for the first time ever, realized that I had a place in a relationship, that I brought value to the table, and just because someone was there, didn’t mean I needed to think that person was going to be “it” for me. I spent a lot of years desperately dating to do “what I was supposed to.”

My experience with the lesbian world, though, was funny. If you’re not gay, you’re straight — even if you’ve dated girls in the past. I found that a lot of people just rolled their eyes if you brought up bisexuality. As a whole, I found there was a lot of pressure to know if I was one way or the other, right off the bat. There is a lot of rhetoric about being “born this way” and clearly there are people that 100% do know from the time they are born if they lean one way or another. I’m just not one of those people.

When you’re older and have something that really disrupts the idea of your identity, it can and will rock your world. It makes you question everything, and frankly, it’s scary as sh*t. I had thought I would get married to a guy, and the hardest part of all of this for me was realizing I didn’t know who would be on the other side of the aisle when I did get married.

Three years later, I have finally arrived at a place where I’m content with where I fall, which took me a really, REALLY long time to get comfortable with. After the pressure for me to say I was one way or another, I learned that I am really not distinctly one way or another. It’s not black and white and the gray area is almost harder to be in than to know emphatically that you’re black or you’re white.

I’ve realized there are things about both genders that I genuinely appreciate. When I think about my wedding in the future, there is not a specific face or gender at the end of the aisle, and I’m okay with that. I really just want to be with the person who is the best fit for me, rather than worrying because society says I need to define it. There is no definition of what is sexy. You get to choose. You get to say what is right for you and you get to say what is wrong for you. I truly believe that love is love and love will always win.

Do what is right for YOU and no one else, because there isn’t a person, lover, or partner that can make you “whole.”

I think the moral of the story for me ultimately is that while love is love, loving yourself and being comfortable with the decisions you make is more important than anything. Do what is right for YOU and no one else, because there isn’t a person, lover, or partner that can make you “whole.” There isn’t anything you can buy or place you can travel that will ever fulfill that. Finding yourself takes time and really, as cheesy and cliché as it sounds, does come from within. I’ve had to learn to truly accept and love myself for who I am, making no apologies, and being okay with that. When the right person comes along who loves me for who I am, I’ll be pretty happy with that too.