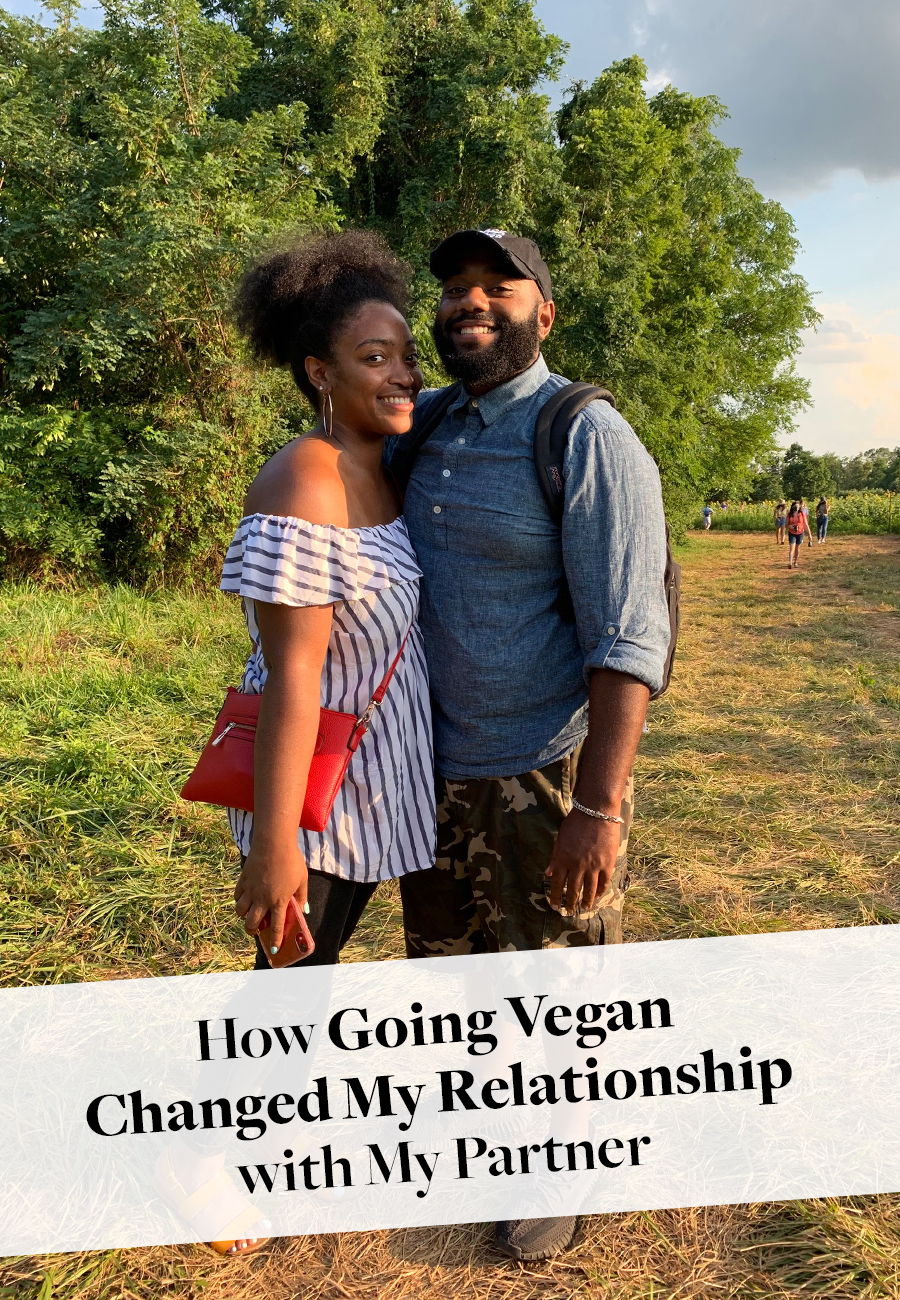 It was just another lazy weekend at home, as my partner and I decided to watch a few documentaries on Netflix, where we stumbled across The Gamechangers, and afterwards, immediately decided to cut out animal products altogether and go vegan. After a quick chat about our intentions for this new journey, we looked at each other for reassurance of our decision to go vegan for our health and the environment, not knowing whether this would bring us closer together or completely starve us. Whatever the outcome, we would be changing our lifestyles together.

Going vegan was never in the plans for us. Before going vegan together, we ate what we wanted, which usually came along with some pretty unhealthy choices. With both of our families also being from the South, we were used to home cooked meals full of an obscene amount of butter, salt, meat, cheese, and starch. We were no strangers to turkey necks in a pot full of greens, big helpings of BBQ ribs, hot dogs and hamburgers at each cookout, and three-cheese baked macaroni and cheese. The benefits of veganism usually skate past or disproportionately don’t make it to the Black community due to the lack of access to healthier food options in many of our communities and the African-American diet overall, even with more and more African-Americans adopting a cleaner diet faster than many other demographics. My partner and I took our new journey day-by-day and started to recognize some of the benefits veganism had on our relationship, shifting the way we viewed food and each other.

We work out together more

Before, working out together was very sporadic for us. In between work schedules, making time for friends and family and scheduled events and outings, our workouts together would be few and far between.

Transitioning from working out a day or two every week to multiple times a week wasn’t an easy transition. Holding each other accountable to make time to work out, even after a long shift at work, helped push us mentally. When one of us was tired, we tried to push through and compromise where we could.

Since making our collective health a priority and going vegan, working out together became another way we showed our commitment to our wellness—and each other. We both kept the same goal in mind: to be better from the inside out. That meant to make sure not just only one of us was active, but that we both stayed active and made it a point to fit working out into both of our schedules.

Instead of a chore, working out to complement our new vegan lifestyle consisted of fun activities like hiking, taking walks on our local trails, biking, and in-home workouts when our schedules got too hectic. In a way, going vegan gave us the push to be better to ourselves for ourselves, and each other.

One unexpected change we noticed instantly after going completely vegan was that our sex life improved in a way that gave us extra energy and stamina. When our eating habits changed to mostly plant-based foods, our libidos and sex drive followed, a welcomed change we both benefited from!

Before committing to a plant-based diet, my partner and I ate what we could get our hands on between our busy schedules, which usually came in the form of a pre-packaged meal or from a fast food restaurant. Those meals usually consisted of heavy forms of proteins and carbs, which put us in the food coma, and thus, making time for sex would take the backburner.

As our meals got more plant-based, we noticed we felt lighter and full of more energy after a meal than sluggish and sedated, giving us that extra “boost” we needed in the bedroom. Having energy for sex now was a great improvement from where we were before, passing out after most meals and only sustaining ourselves enough for quick sessions in the bedroom. And since we made the change in our eating habits together, we both saw—and felt!—the difference. 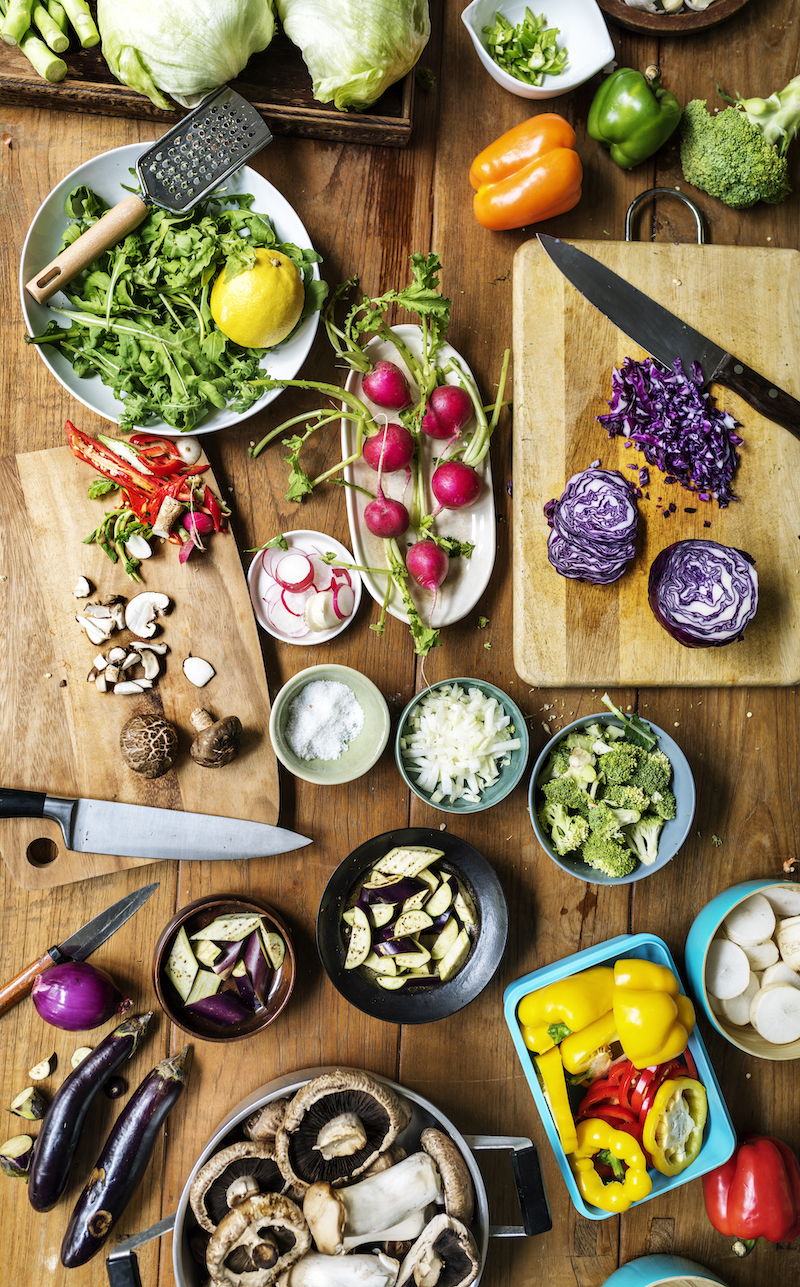 We cook with and for each other

Changing up our eating habits to eat more plant-based came with a whole new way of looking at food and how and what we cooked on a daily basis, and since we were going vegan together, planning dinners, meal prepping, and date nights became a team sport. Whereas before when one of us would get the other some food on the way home, with a different type of diet, we became more mindful of what we ate, and cooking together became more frequent and fun.

We started to plan our meals together to make sure we both were eating well and staying full throughout the day. Cooking dinner together became even more fun, as we browsed through Pinterest, vegan cookbooks, and scoured the internet to find new ways to cook our favorite meals, and helped each other in the kitchen. Once we found our new favorite vegan recipes, my partner quickly went from my sous chef to the head chef, taking the reins in the kitchen and whipping up meals for the both of us. As we stayed committed to this new way of eating together, we stayed in the kitchen longer and cooked as a unit instead of making two separate meals that could accommodate both of our appetites.

We take more accountability for each other’s wellness

Before switching up our eating habits, caring for each other’s overall health wasn’t exactly second-nature. Besides the regular annual doctor’s appointment and daily multivitamins, our health wasn’t exactly top of mind. Going vegan helped us be more attentive to what goes in both our bodies, holding ourselves accountable for making changes to better our overall health.

It was no longer about whether I or he was eating well; we both took accountability for each other’s eating habits. We gave each other more grace and patience as well. When meal prepping wasn’t an option, we made an agreement to continue our vegan journey, even while away from each other. This included checking in on each other and giving each other permission to eat how we wanted to. There were some easier days being vegan and not-so easy days where we craved our favorite seafood restaurant, but we remembered why each other’s health was important and gave each other grace when necessary.

We now know that changing our eating habits by going vegan was the push we needed to help sustain a healthy relationship from the inside out. Changing up years of eating habits didn’t come naturally overnight, but we had each other as motivation, and as a result, our accountability to each other, how we made time for each other, and our love for food—and each other—grew.