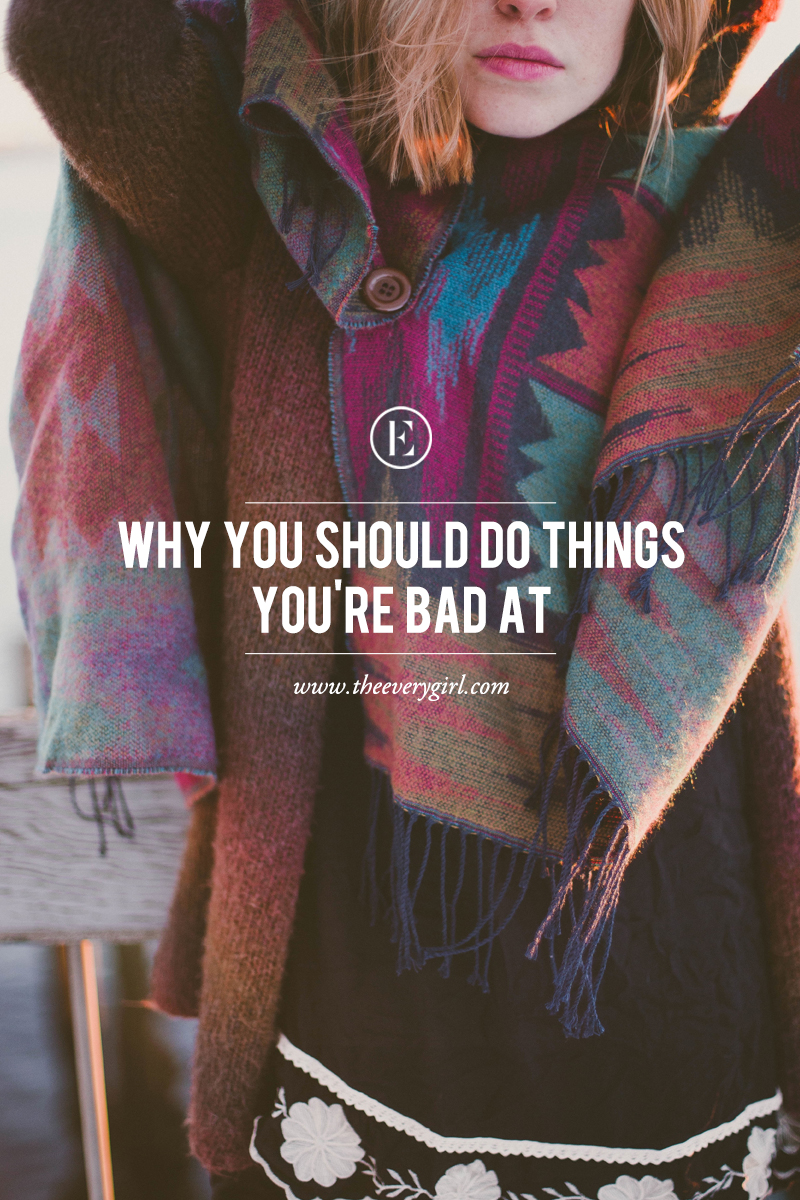 I’m not a huge fan of doing things I’m bad at. One, because who is? And two, because it’s embarrassing, annoying, and all-around not fun—three feelings I like to avoid. So last August when I walked into a classroom full of about 17 strangers and attempted to learn a craft based on the idea of embracing failure…let’s just say I was scared out of my mind.

The subject matter of this class was improv (or improvisation if you want to take the time to say the whole thing). And the only reason I dared attempt it was because so many of my writing heroes had started out in improv (Tina Fey, Stephen Colbert, Ilana glazer and Abbi Jacobson…the list could go on forever and ever). So I figured there must be something to this whole shebang and if I wanted to dive into the comedy writing world, well, this was where to start.

There was only one problem: I knew I was going to be really bad at it.

I can be slightly socially anxious and on the shy side and, up until then, my experience with comedy was all in written form—working solo, with the time to carefully word jokes and stories just right before ever showing a soul. So creating something reliant on others, with zero planning, and uncertain results sounded like torture to me. So naturally I signed up for eight weeks of 3-hour classes.

It’s a way to keep fear from having power over you.

In a lot of ways it was exactly as bad as I imagined it would be. For example, in my second class we had to all silently act out a death scene. Our teacher told us to make it as gruesome and drawn out as possible and that once a classmate had used a method of death (car accident, electrocution, etc.) we could no longer use it in our scene. Naturally, I went second to last (always hoping that I’ll somehow get out of the exercise) and by then, the only thing I could think of was being a Disney princess who gets killed by a bunch of magical, woodland creatures. Being a very ambitious scene to act out with no words or props or experience or talent, I panicked midway and “ate a poisonous apple” about 23 seconds in and just collapsed on the ground to get it over with.

I think I blacked out from embarrassment.

But for some reason I kept going back.  As I continued to take classes (I ended up studying it for almost a year), I started to really appreciate that thrill of failure—the knowledge that I was willingly putting myself in the ring for something that I was not all that great at. Every week I would trudge into the theater, bolstered for defeat. And a lot of times when we took a mid-class break, I would think of running out to my car and driving away forever.

Naturally, I have many horror stories but I also have so many new insights—not just on my writing, but on life in general. And throughout that year, when asked about improv, I would usually find myself talking about what a humbling and growing experience it is to do something you’re bad at…and then to keep doing it. Of course it’s not always fun—usually it’s not fun at all in the moment. But when you step away, you realize you came out on the other side and maybe your ego is just a tad bit smaller, and your empathy a tad bit stronger.

GQ interviewed Stephen Colbert recently and when he talked about his experience with improv, he summed this concept up perfectly, as he usually does. He tells of his first performance, after his coach told him, “You have to learn to love the bomb. It took me a long time to really understand what that meant. It wasn’t ‘Don’t worry, you’ll get it next time.’ It wasn’t ‘Laugh it off.’ No, it means what it says. You gotta learn to love when you’re failing.… The embracing of that, the discomfort of failing in front of an audience, leads you to penetrate through the fear that blinds you. Fear is the mind killer.”

Something really cool happens when you purposefully flex the muscle that says ‘I don’t have to be perfect at everything I do.’

So I think doing things you’re bad at is a way to keep fear from having power over you. It can feel very counterintuitive to pursue something that doesn’t come naturally to you; especially when it is so delicious to stick to what you know and hang out on top. But something really cool happens when you purposefully flex the muscle that says I don’t have to be perfect at everything I do. Because you realize that nothing actually all that bad happens. In fact, how you get back up can teach you as much as how you fall down.

And it turns out that’s almost as liberating as the safety of sticking with what you’re great at. (Almost.)